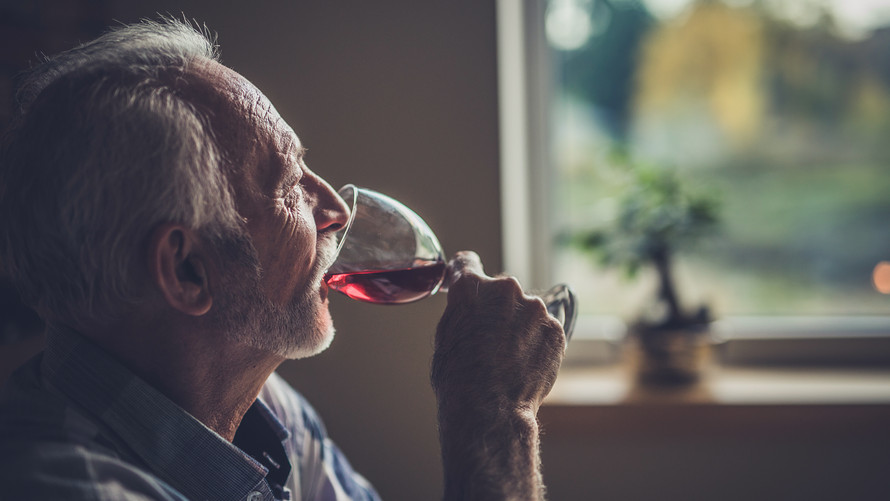 skynesher/iStock
These older drinkers are more likely to be male, and to smoke.

Binge drinking is booming — among boomers.

In fact, more than one in 10 Americans ages 65 and older are binge drinkers, according to a New York University study published in the Journal of the American Geriatrics Society on Wednesday, which is defined as having five or more drinks during one occasion in the past month for men, and four or more for women.

This is sobering news, considering that the National Institute on Alcohol Abuse and Alcoholism (NIAAA) recommends that adults over 65 consume three alcoholic drinks or fewer a day. Alcohol misuse isn’t good for anybody, but it can be dangerous for seniors in particular.

“Older adults are especially vulnerable to the harms of alcohol use, especially binge drinking, due to physiological changes of aging and the higher likelihood of having more chronic medical disease and taking more prescribed medications,” lead study author Benjamin Han told MarketWatch. He’s the assistant professor in the Department of Medicine’s Division of Geriatric Medicine and Palliative Care at NYU Langone Health. “Binge drinking can increase the risk for injury for older adults, especially falls, and can exacerbate existing chronic disease such as hypertension,” he said.

Yet the rate of baby boomers (aged 55 to 74) overindulging in alcohol is on the rise. Previous research has found that binge drinking among adults ages 50 and up spiked 19% between 2005 and 2014 .

Related: Does drinking 1 bottle of wine a week raise cancer risk as much as 10 cigarettes?

So the NYU researchers analyzed data from 10,927 American adults ages 65 and up who participated in the National Survey on Drug Use and Health between 2015 and 2017, including their self-reported alcohol use, their tobacco and cannabis use, as well as demographic and health factors.

And they estimate that more than a tenth (10.6%) of U.S. adults over 65 are current binge drinkers.

“It might just be that a lot of middle-aged people who drink a lot are simply aging into an older age bracket,” the study’s senior author, Joseph Palamar, an associate professor in the Department of Population Health at NYU Langone Health, told MarketWatch.

Don’t miss: Why millennials prefer cannabis to booze: ‘Zero enjoyment out of drinking’

They also found that these older imbibers are more likely to be male and use tobacco or cannabis. They were also statistically more likely to have family incomes under $20,000 and to have visited an emergency room in the past year. And the most common chronic diseases suffered by these binge drinkers were hypertension (41.4%), cardiovascular disease (23.1%) and diabetes (17.7%).

Yet, interestingly enough, older binge drinkers were less likely to have most chronic diseases compared with those who did not binge drink, which the researchers theorized was because some people either cut down on their drinking or stop altogether when they develop an illness or alcohol-related disease.

Related: How one person’s excessive drinking can create financial havoc for others

“Clinicians must be aware that some older adults with chronic disease still engage in binge drinking behaviors, which can worsen their health issues. This may explain why binge drinkers were more likely to report visits to the emergency room,” Palamar wrote in a post accompanying the report.

The study notes that the alarming statistics in this study may be underestimated, however, as the subjects self-reported their alcohol use, and some may have downplayed their actual consumption due to social stigma. After all, Americans spent $71 billion on wine last year . And boomers spent more money on alcohol over the course of a year ($518) than millennials ($461) in 2016, according to a NerdWallet report . And almost 30% of U.S. adults admitted that they’ve had a problem with drinking to excess in a 2015 study of roughly 36,000 people .

Related: How binge drinking in college could affect the rest of your life

“Our results underscore the importance of educating, screening, and intervening to prevent alcohol-related harms in older adults, who may not be aware of their heightened risk for injuries and how alcohol can exacerbate chronic diseases,” added Han in his report.

And alcohol isn’t the only substance that senior citizens are indulging in. The number of boomers consuming legal cannabis rose 25% in 2018. And more boomers are using medical marijuana in particular to treat chronic pain.

Related: More baby boomers use medical marijuana, but they want their doctors to get wise to the risks and benefits