IKEA founder Ingvar Kamprad, who died on Sunday, may (or may not) have been surprised 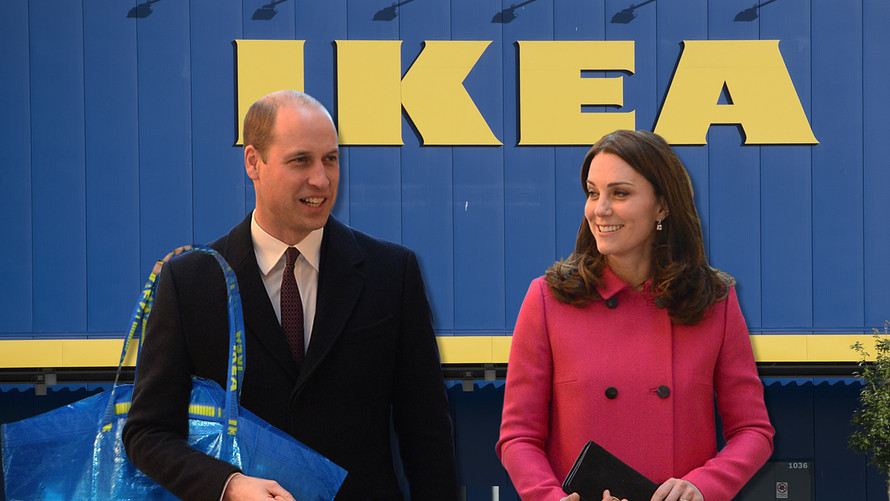 MarketWatch photo illustration/Getty Images
What Prince William and Kate Middleton would look like if they actually went shopping at IKEA.

Ingvar Kamprad, who founded the Swedish furniture empire IKEA at the age of 17, died Sunday aged 91. But even he may have been surprised by the news out of Stockholm this week.

Marcus Engman, Ikea’s head of design, told the London Times that Britain’s Prince William and his wife, Kate Middleton, Duchess of Cambridge, told him they had IKEA furniture for Prince George and Princess Charlotte when the royal couple were touring the store in Stockholm. “I’m proud we can suit everybody,” he said. “That’s what we want IKEA to be for many people around the world, both royalty and ordinary people.”

Kamprad mastered the art of cheap, do-it-yourself furniture, and turned what could be seen as a chore — putting together your own wardrobes and bookshelves, and choosing the parts yourself in a vast warehouse — into an experience.

IKEA has approximately 400 stores worldwide and aims to generate $62 billion in sales by 2020, but it somehow remains a consumer-friendly symbol of humble living where people try to make the most of small spaces with simple furniture. Kamprad once said, “I could have an office all to myself but since my collaborators don’t have one, then I too am contented to have a desk in a shared room.” 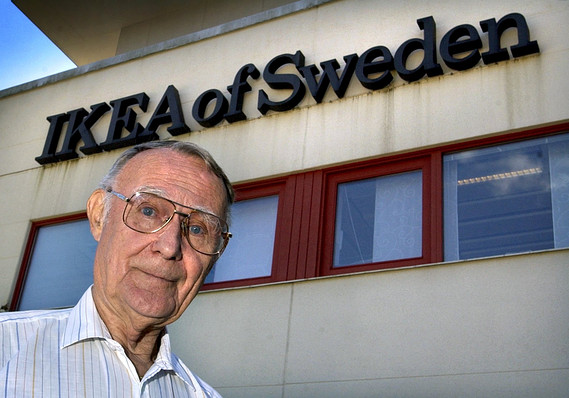 Here are 10 ways IKEA helped change the face of shopping:

1. IKEA was a one-stop shop for a family day out

It’s not possible to get lost in IKEA, but it’s eminently possible to spend all day in one store. Not many retailers can lay claim to that. Marketing consultant Martin Lindstrom, author of “ Brandwashed: Tricks Companies Use to Manipulate Our Minds and Persuade Us to Buy ,” has rules to avoid overspending. Rule No. 1: “Don’t bring your kids with you,” he says. They’ll help you spend 29% more than your budget, according to a study of nearly 3,000 consumers Lindstrom carried out. No. 2: “Don’t shop with your partner,” he says. He or she will make you spend 19% more than planned. No. 3: “Don’t use a shopping cart. People who carry their stuff spend 8% less.”

2. They sell you a reusable bag or supply large trolleys

Why not send a message that your company cares about the environment and — at the same time — ensure customers hit the stores armed with an empty bag? IKEA, Wal-Mart /zigman2/quotes/207374728/composite WMT +0.48%  and Whole Foods  are among the many retailers that offer reusable shopping bags or large trolleys. The bags sometimes even bear the company’s logo, providing free advertising for the store. (IKEA’s blue bags are instantly recognizable even without a logo.) But mainly the bags create a void that needs to be filled, encouraging consumers to buy more than they need, says Johan Stenebo, author of the book “The Truth About IKEA.” “There’s a reason why they’re so big,” he says. (IKEA, Wal-Mart and Whole Foods did not respond to requests for comment.)

IKEA has been named one of Fortune’s top 20 best workplaces, citing the benefits and opportunities for advancement. Happy staff are helpful staff. Graphic designer Daniel Drenger said he once went to IKEA with a friend and ended up with a trolley full of soft furnishings and various accessories for his home. He hadn’t intended to shop, but everything was laid out so well and the staff was so welcoming and friendly, he said. It was almost like stepping into someone else’s home. “Customers want more meaningful experiences,” says Derrick Daye, managing director at Los Angeles-based consultancy The Blake Project. The overly-friendly staff are trying to fulfill that desire, he says.

4. IKEA gives you a place to put your feet up

IKEA provides a winding path through the store punctuated with relaxing spaces for weary shoppers to rest their feet. Don’t loiter too long though: These rest areas are often placed next to displays of products that stores want to unload, says Stenebo, who worked at IKEA from 1988 to 2008 in a variety of roles from product development to management, and is also the former assistant to the group’s founder, the late Ingmar Kamprad. “Retailers call this the hot-hot-hot spot for inventory that’s not shifting,” he says. That said, IKEA is a destination store usually situated on the outskirts of a city, and not a department store where people pop into for five or 10 minutes while running errands. That’s why they sell you meatballs after you’ve finished your shopping.

The “compromise price effect” is most often used by discount retailers and electronics stores that want customers to pay extra for a better camera or computer, but it’s also used effectively at IKEA too, says Michelle Barnhart, associate professor of marketing at Oregon State University College of Business. Here’s how it works: If a $225 sofa is strategically placed next to a slightly cheaper — but very similar — $195 sofa, the customer might be tempted to opt for the latter and walk away still believing that he or she got a good deal. The “compromise price effect” can be effective in a store or even online, she says.

6. They price everything one cent short of a whole number

Nobody believes they’ll be persuaded to buy something simply because it’s priced $9.99 instead of $10, but studies say otherwise. It’s called the “left-digit effect.” The difference of one cent can turn a window shopper into an actual shopper, according to a 2009 study by researchers at Colorado State University and Washington State University, published in the Journal of Consumer Research. In one test, the researchers asked participants to evaluate two identical pens: They priced one at $2.00 and the other $3.99 — amazingly, 44% of the participants chose the higher-priced pen. IKEA has a range of cost at $129, $79, $249, $349. And when they’re reduced? The numbers are even odder: reduced from $349 to $343.

7. IKEA offers to solve your life problems (but you need to do the work)

The influence of IKEA can be most starkly seen at the Apple Store /zigman2/quotes/202934861/composite AAPL -2.27% , as well as other electronic outlets from Best Buy to Microsoft /zigman2/quotes/207732364/composite MSFT -1.79% . Apple Store employees are among the most successful at solving your problems, says Carmine Gallo, author of “The Apple Experience: Secrets to Building Insanely Great Customer Loyalty.” Apple’s “genius bar” is a team of sales people designed to solve problems and empower the customer rather than (just) make sales, he says. It’s been paying off: There are roughly more than 500 million visits to Apple retail stores per year, according to market researcher Asymco; that’s roughly equivalent to the population of the European Union. However, more than 780 million customers visit IKEA stores every year.

8. They use cheap items as the thin end of the wedge

Beware of the bags of tea lights, candles and multicolored plastic toilet brushes positioned next to the IKEA entrance. They are designed to break a psychological barrier and get consumers shopping, independent retail consultant Jeff Green. In retail parlance, they’re “open-the-wallet” items and they often appear as an elaborate and random display. Displays could include everything from plastic to-go cups to eye-catching rubber spatulas. U.S. retailers have also taken the “open-the-wallet” concept to a whole new level by promoting cheap stuff in October in the hope that people will keep shopping in November and December. “Americans are cautious,” Green says, so they need a little extra push to get them in the mood to spend money.

There’s a reason a minimalist design works at IKEA and Apple, but this turns off regular shoppers in a store like J.C. Penney . IKEA sells inexpensive furniture that is simply displayed to show how easy it will fit into your home, while J.C. Penney is a promotional store where people enjoy the voyage the bottom of the bargain basement, says Brent Shelton, a shopping expert and public relations executive. “Big box department stores make you dig around and see what’s on sale,” he says. “People feel like they’re on a treasure hunt and finding a bargain that someone else missed.” (Music is used to either keep people moving briskly through the store or to slow them down, depending on how busy they are, according to an analysis of big supermarkets by Casino.org. Plus, there’s no free shelf space at the checkout, leaving no room to dump unwanted items.)

10. IKEA piles on the accessories

Buying toys for kids can be a gift that keeps on giving: IKEA will sell you one size of plastic container for all the stuff you bought, but maybe don’t need, and it will have one in every shape and size to fit into all the awkward nooks and crannies at home. Another example: The battery life of Apple’s iPhones has long been a bugbear for Apple fans. Apple sells a Mophie Juice Pack Plus charger case ($120), which doubles the time to talk, text and surf the Web. Ingvar Kamprad took a leaf out of Lieutenant Columbo’s playbook, Shelton says, “There will always be ‘Just one more thing.’” Or, in fact, maybe it was the other way around.