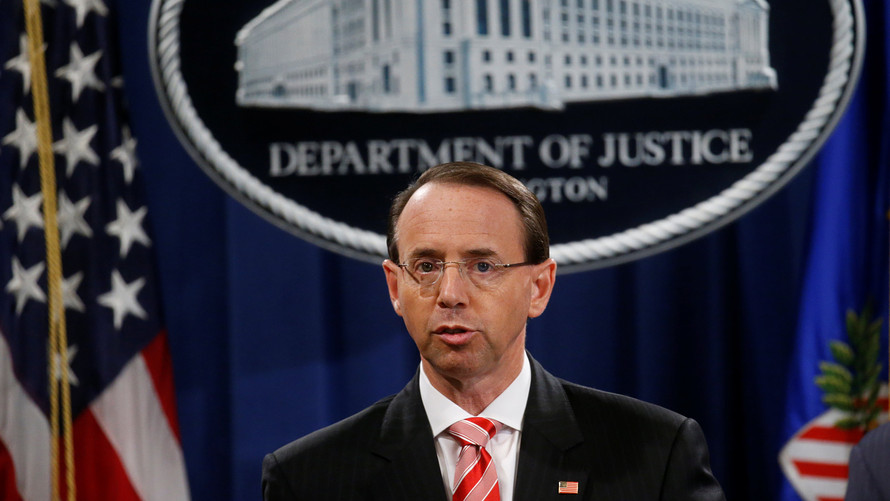 Special Counsel Robert Mueller charged 12 Russian military intelligence agents on Friday with hacking into the computers of Hillary Clinton and the Democratic Party ahead of the 2016 election.

The federal grand-jury indictment comes just ahead of President Donald Trump’s meeting with Russian President Vladimir Putin on Monday. Russia has been accused in past Mueller indictments of seeking Trump’s election, and Trump said on Friday that he would bring up the issue of “meddling” with the Russian president.

The Mueller indictment states that officers of the GRU — Russian military intelligence — gained unauthorized access into the computers, stole documents, and tried to interfere with the U.S. presidential election. Deputy Attorney General Rod Rosenstein, however, stated at a press conference that the indictment does not allege that the vote count was impacted by the actions.

The indictment states that starting in March 2016, the conspirators started to hack the email accounts of Clinton campaign officials, including its chairman, John Podesta, whose emails were later released over Wikileaks. The next month, they hacked into the networks of the Democratic Congressional Campaign Committee and the Democratic National Committee. By June, they started releasing stolen emails and documents via “DCLeaks” and “Guccifer 2.0,” the indictment states.

Just hours after Trump said on July 27, 2016, “Russia, if you’re listening, I hope you’re able to find the 30,000 emails that are missing,” the Russians attempted to spearfish “for the first time email accounts at a domain hosted by a third-party provider and used by Clinton’s personal office.” The indictment doesn’t draw a connection between Trump’s remarks and the actions.

They used a network of computers across the world and paid for this infrastructure via cryptocurrency, mostly bitcoin /zigman2/quotes/31322028/realtime BTCUSD -0.06%  . The use of bitcoin allowed them to avoid direct relationships with traditional financial institutions, the indictment said.

During the press conference, Rosenstein was asked about the timing of the indictment and denied it was related to Trump’s meeting with Putin. “It’s a function of the collection of facts, evidence of law and determination sufficient to present the indictment at this time,” he said.

Rosenstein declined to characterize how Trump personally responded. “I’ll let the president speak for himself,” Rosenstein said. “It’s important for the president to know what information we’ve uncovered because he needs to make important decisions for the country. He needs to understand what evidence we have of foreign interference.”

Rosenstein oversees Mueller’s investigation because Attorney General Jeff Sessions has recused himself due to his participation in the Trump presidential campaign.

In a statement, the White House pointed out there’s no allegation that any American knew they were corresponding with Russians or committed a crime. “Today’s charges include no allegations of knowing involvement by anyone on the campaign and no allegations that the alleged hacking affected the election result. This is consistent with what we have been saying all along,” said Lindsay Walters, deputy press secretary.

Democrats including Sen. Chuck Schumer, the minority leader, called on Trump to cancel the Putin meeting.

Get news alerts on Bitcoin USD and Dow Jones Industrial Average — or create your own.