Small-cap indices have soared since Trump’s election, but there are still quality bargains to be had 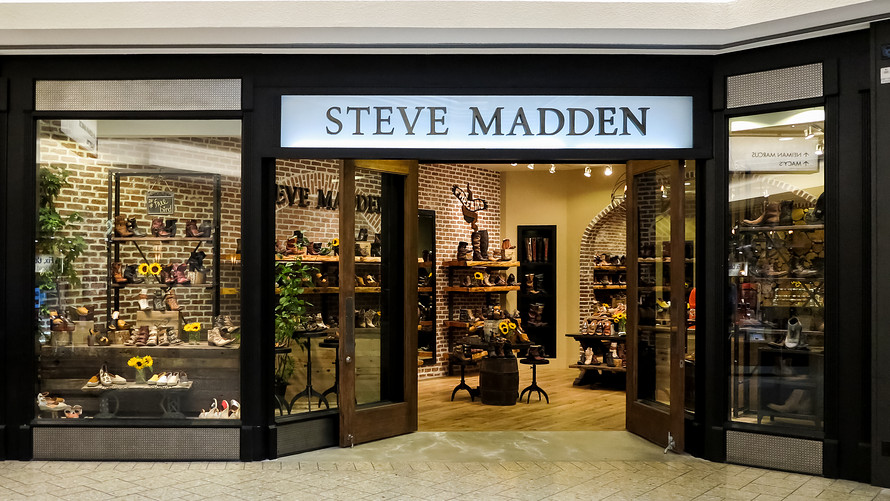 Goran Bogicevic / Shutterstock.com
Steven Madden Ltd. is among a select group of small-cap companies that have boosted sales and improved profit margins but still trade at a lower price-to-earnings valuation than the index they’re in.

Do you think it’s too late to invest in small-cap stocks, which have rallied 12% in the three weeks since Donald Trump won the presidential election?

If you’re going the easy route with an index fund, you may be right. But if you dig deeper, there are still quality companies trading at relative bargains.

We have identified 17 companies in the S&P 600 Small Cap index (S&P:SML) that have met stringent financial criteria and are trading at price-to-earnings values that are lower than that of the index. 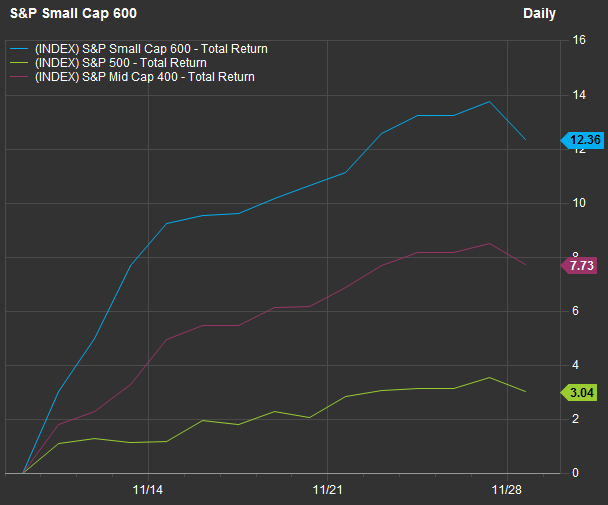 FactSet
The post-election rally has been broad, but small-cap stocks have outperformed.

Of course, it’s too early to know just what Trump may accomplish early in his presidency, but tax-reform legislation would be likely to lift all boats, and Republican control of both houses of Congress makes that seem likely to happen. Meanwhile, long-term interest rates are rising, which bolsters the dollar. One reason investors are favoring small-cap U.S. companies is that most of their sales are domestic. A strong dollar can be painful for exporters and multinational companies.

So how expensive is the S&P 600 Small-Cap Index today? This chart shows how much the forward price-to-earnings multiple has increased over the past 12 months: 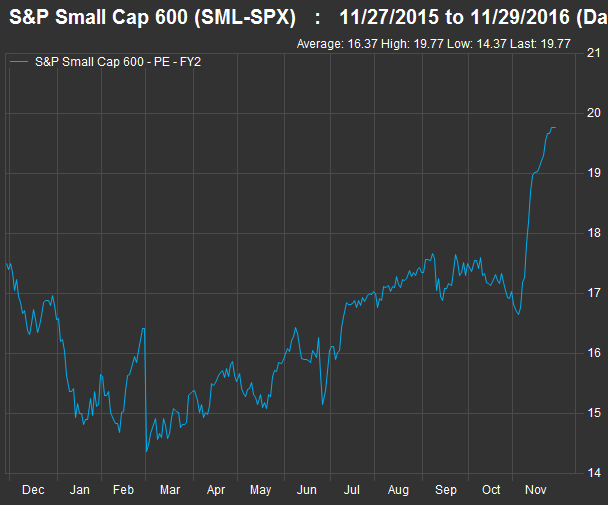 FactSet
The S&P 600 Small-Cap Index’s forward price-to-earnings ratio has increased dramatically over the past year.

The index traded for 19.8 times weighted consensus 2017 earnings estimates, among analysts polled by FactSet, as of the close on Nov. 28. That was up from 17.5 a year earlier. In fact, the index hasn’t traded so high relative to the following year’s earnings estimates since 2002.

That is why jumping into a small-cap index fund, such as the SPDR S&P 600 Small-Cap ETF (PSE:SLY)  might be a rather risky choice for you today.

Starting with the S&P 600, we limited the group to stocks meeting these criteria:

The idea is to isolate companies that are increasing sales, while improving their pricing margins and overall efficiency.

Here’s how the 17 companies have increased sales per share over the past 12 months:

Here are the widening 12-month profit margins for the group:

Finally, here’s a summary of analysts’ opinion about these small-cap stocks:

This can be considered a conservative list of steady performers. The stringent margin and price-to-earnings criteria will exclude some companies with rapid sales growth, which means some “winners” may be excluded as well. But these companies can give you peace of mind as you ride out day-to-day volatility in the pursuit of long-term investment profits.

If you are interested in any of these companies, your next step should be to do your own research to understand the businesses and form your own opinion about their prospects for continued success.