18,000 New York City students treated to free performance of ‘To Kill a Mockingbird’

Screenwriter Aaron Sorkin adapted the play based on the Harper Lee novel, and it crackles with references to modern-day issues 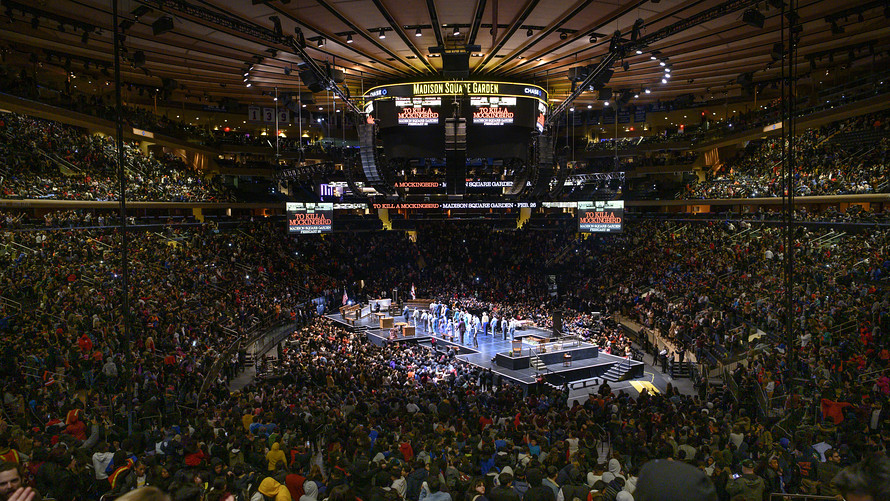 Associated Press
The cast of ‘To Kill a Mockingbird’ on stage after a special performance for New York City students at Madison Square Garden on Wednesday — it was the first time a Broadway play had been performed at the famed sports venue.

NEW YORK (AP) — The cast of “To Kill a Mockingbird” traded its somber Broadway home Wednesday for the cavernous Madison Square Garden, performing the play for 18,000 school kids in an electric one-time-only performance that one actor called “primal.”

It marks the first time a Broadway play has been performed at the venue nicknamed “The World’s Most Famous Arena,” which is home to the NBA’s New York Knicks and the NHL’s Rangers. At the last line of the play, “All rise,” the students did exactly that, giving the performance a standing ovation and a hearty thank you.

At times, the famed arena fell silent. It felt as if the 18,000 young people held their breath during courtroom scenes.

“I loved the book in middle school when I read it, and seeing it live and seeing the characters come to life — it’s so much more real,” said Alissa DiCristo, 17. “It makes you feel so much more.”

The play’s usual Broadway home is the 1,435-seat Shubert Theatre, where it’s routinely sold out. But thousands of middle- and high-school students from all five boroughs got to see it for free, courtesy of the Scott Rudin–led production and James L. Dolan, executive chairman and CEO of the Madison Square Garden Co. . The tickets were distributed by the city’s Department of Education. Free popcorn and bottles of water were offered on the way out.

The audience this time surrounded the stage and, in the moments before the play, started using the flashlight feature on their phones to make patterns and signals, turning the Garden into a tapestry of lights, like a forest ignited with fireflies.

As the play progressed, the students clapped, booed, cheered and gasped, even erupting in the same excitement as a buzzer-beating 3-point shot when the stately Atticus Finch wrestled with the evil Bob Ewell. At other times, the area fell completely silent as it felt like 18,000 young people held their breaths, particularly during courtroom scenes.

“We did say how we feel, and each and everyone was respectful, too, when they needed to [be],” said 17-year-old Eric Meza, for whom this was a first Broadway show. “It was just an amazing experience.”

The novel “To Kill a Mockingbird” by Harper Lee won a Pulitzer Prize in 1961 and has been widely praised as a sensitive portrait of racial tension in 1930s Alabama. At its core is Finch, a lawyer called upon to defend a black man falsely accused of raping a white woman.

Oscar-winning screenwriter Aaron Sorkin is behind this latest stage adaptation of the Lee novel — adapted to the silver screen in 1961, with Gregory Peck winning an Oscar for best actor — and it crackles with current issues: institutional racism, a flawed criminal-justice system, police misconduct, sexual assault and standing up against societal evil.

Ripples of anger coursed through the crowd when racial epithets were used.

“I feel like it targeted a lot of prominent issues in today’s society, and it really did speak to me,” said Ambria Creary, 17. “Definitely there were parts where you had to react because it hurt so bad to even imagine it happening today.”

The entire current Broadway cast performed the show, led by Ed Harris as Finch. They practiced for the Madison Square Garden show in a warehouse in Long Island City, Queens, preparing to work their new space, a stage measuring 90 feet in length by 40 feet in width.

Despite the scale, the actors sought to keep the experience intimate, rolling pieces of equipment onstage and helping to put away props. Some, when not onstage, sat in chairs or on a bench awaiting their cues. At one point, Nick Robinson, who plays Jem, gave Lisa Gay Hamilton, who plays Calpurnia, a gentle hug after a powerful scene.

“It was magical. It felt like what theater used to like be thousands of years ago,” said actor Taylor Trensch, who plays Dill Harris. “It’s something I’ll remember forever.”

Mayor Bill de Blasio and his wife, Chirlane McCray, introduced the show, urging the students to think about the themes of the play — and to embrace the arts. “You are part of history today,” McCray said. Film director Spike Lee, a fixture at the Garden as a die-hard Knicks fan, said: “Don’t let anyone tell you you can’t be artists. Follow your dreams.”

While Sorkin’s script wasn’t altered on Wednesday, the staging had to adapt to the hulking space. Eight cameras captured the action and beamed it to four massive screens so everyone could see the play in all its details.

The stage arrived in about 100 pieces and took four hours in install, including the jury box, which remains empty throughout, a signal that the audience plays a part in the trial. On Wednesday, director Bartlett Sher paced along one side of the stage during the performance, helping actors with the sound equipment and cheering them on.

Trensch thought back to his own youth as he wondered whether the three-hour play would capture the attention of the children. He needn’t have worried.

“It was almost primal,” he said. “There was like an electrical charge in the air that you don’t get at the Shubert Theatre.”