5 reasons the dollar will get stronger 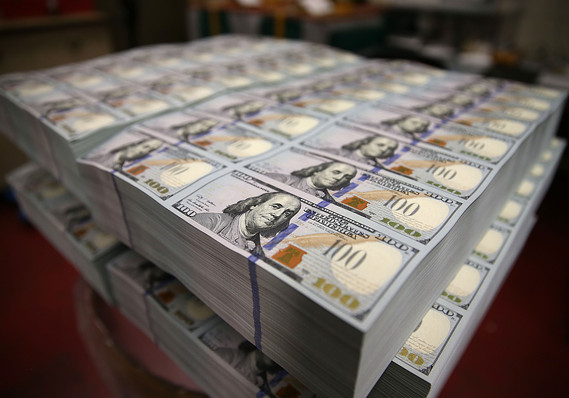 I don't write with a lot of angst generally, but I think I will be today and for the next several columns. Today's topic, the dollar, is the linchpin for upcoming columns as I believe a lot of people are getting the dollar all wrong again and, in turn, a lot of other things wrong, too.

In several columns at my investment letter, I have pointed out that we appear to be closing in on a significant stock-market dislocation. When the correction happens, it will coincide with dollar strength. I am not sure which will come first, the correction or the stronger dollar. My guess is the dollar anticipates the correction, prods the correction along and then accelerates to the upside as the correction completes. I am very bullish right now on the PowerShares DB U.S. Dollar Bullish ETF (PSE:UUP)  and bearish on the iShares Russell 2000 ETF (PSE:IWM)  which will once again suffer as buyers leave the stock market on volatility.

Here are five reasons the dollar could get stronger soon:

There are more reasons the dollar could get stronger, not the least of which is if the Fed feels compelled to raise interest rates. The only reason I didn't include the Fed in my list and make it six reasons, is who knows what the Fed will do month to month. They haven't been very clear about their intentions or even their motives as far as I'm concerned.

Where the perma-bears have it wrong

Getting back to the angst, the main reason I'm still irritated is because the perma-bears on the dollar have got it so wrong, yet have so many loyal followers who love to say "fiat currency" as if there is anything else. A few years ago I wrote that the buck was about to embark on a long-term run-up and would remain the world's reserve currency for another 40 years. We're just entering the fourth year of that period, and I don't see anything to suggest I'm wrong. The dollar has just relaxed after a significant move up, and I believe is about to get stronger again soon.

Just to preempt the dollar-doomers who will hammer me in the comments section, I do agree that the United States has a debt problem and major obligation issues (say "entitlements" all you want to make it sound like we shouldn't have to pay, but we have obligations to our own citizens). Currency strength is relative to other currencies’ strength. So, while the U.S. certainly has problems, Europe, Japan, China and the United Kingdom, the other four sponsors of the fiat currencies in the International Monetary Fund's Special Drawing Rights basket, are in far worse shape than the United States.

Yes, that is the least-dirty-shirt argument, but it's accurate. I know that doesn't scream confidence, but does any American really want to be in euro, yen, yuan or pound instead of the dollar when it comes to maintaining purchasing power here in the United States? We all know what is going to happen when global debts really start to rebalance — which appears to me now is coming sooner than I originally expected — the dollar will surge and most asset prices will fall.

All of this is not to say the dollar will go straight up or avoid fluctuations. International and domestic economics, as well as, the Federal Reserve will push the dollar higher and lower from time to time. However, the dollar will be in a higher range than it was a few years ago for a very long time. That will make investing interesting. Those who follow the dollar will have a huge advantage in their portfolios. A stronger dollar also makes American standard of living better and you shouldn't forget that many politicians know that too.

Kirk's low cost investment letter Fundamental Trends has recommended UUP and puts on IWM. <EMPHASIS>Kirk Spano and clients of Bluemound Asset Management have positions in UUP and puts on IWM.</EMPHASIS> Neither Spano nor Bluemound clients plan any transactions in the next three trading days. Opinions subject to change at any time without notice.