5 things to know about Albertsons before its IPO 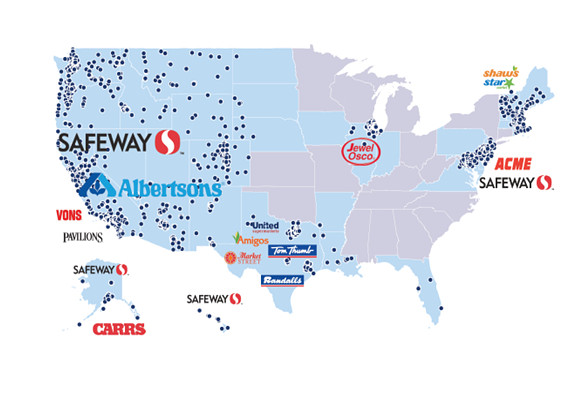 Grocery giant Albertsons Cos. is looking to raise nearly $2 billion from its initial public offering on the New York Stock Exchange, as it unveiled more terms of the proposed listing on Friday.

The company said it intends to offer 65.3 million shares at $23 to $26 a share, and could sell an additional 9.8 million shares if there is strong demand. If all 75.1 million shares are sold at the top of the indicated range, the deal would total $1.95 billion.

The company last week had indicated the offering could total $1.84 billion.

The stock is to trade under the symbol “ABS.”

None of its existing shareholders, led by private-equity firm Cerberus Capital Management LP, will sell any of their holdings, and they will be subject to a 180-day lockup period, according to the updated prospectus filed Friday .

Here are five things to know about Albertsons:

1. You may not know you shop there. Albertsons   is now the second-largest supermarket chain in the U.S., behind Kroger Co., following its acquisition of Safeway in 2014. But it operates under 18 brands. Beyond Albertsons and Safeway, the brands include Jewel-Osco, Acme, Shaw’s, Amigos and Tom Thumb.

The company operated 2,205 stores, as of June 30. It ranks first or second in market share in 68% of the 121 metropolitan statistical areas in which it has stores. It is in the midst of acquiring 71 stores (and possibly one additional store) from A&P, now in bankruptcy protection, that will be rebranded as Acme stores.

2. Same-store sales growth is accelerating, but the company is losing money. Same-store sales at two units that were acquired in 2013—SVU Albertsons (Albertson stores it didn’t already own) and NAI (Acme, Jewel-Osco, Shaw’s and Star Market brands)—had actually been falling prior to the deal; they are now rising. At Safeway, same-store sales in the first quarter of fiscal 2015 were up 3.8%, the pace was 2.2% a year earlier.

3. Its big investors run the show. This is how the prospectus puts it: “Our Sponsors will indirectly control us through their respective ownership of Albertsons Investor and Kimco and will continue to be able to control the election of our directors, determine our corporate and management policies and determine, without the consent of our other stockholders, the outcome of any corporate transaction or other matter submitted to our stockholders for approval, including potential mergers or acquisitions, asset sales and other significant corporate transactions.”

Those sponsors include Cerberus as well as Klaff Realty and Lubert-Adler (two real-estate investors) and Schottenstein Stores, an owner and operator of shopping centers. Kimco Realty Corp. /zigman2/quotes/202836571/composite KIM +2.94% is a real-estate investment trust.

As of June 30, Cerberus is owed $41.25 million in management fees over the remainder of a 48-month period that began Jan. 30. That balance will be paid following the IPO.

4. Much of the IPO will be used to repay debt. Albertsons’ debt load more than tripled in a year, largely because of the Safeway deal. Total debt increased to $12.6 billion at the end of fiscal 2014, from $3.7 billion a year earlier, according to the preliminary prospectus. The IPO proceeds will be used to repay more than $1 billion in debt, it added.

5. Don’t expect a dividend. “We do not intend to pay dividends for the foreseeable future,” according to the preliminary prospectus.

Get news alerts on Kimco Realty Corp. — or create your own.