On the 50th anniversary of the Moon landing, thank NASA for memory foam, pet odor filters — and GPS on your iPhone 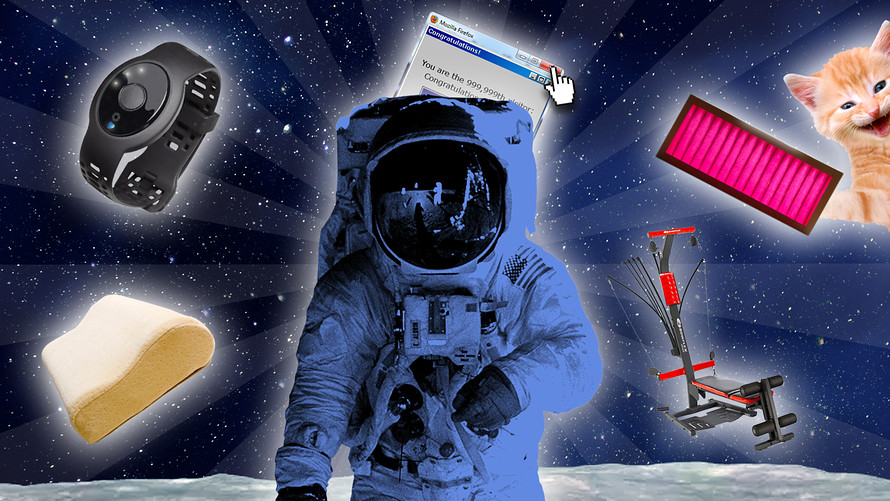 MarketWatch photo illustration/Getty Images, iStockphoto
Consumers have benefited from the side effects of NASA research.

Decades of innovations from the study of outer space have come down to Earth, into store aisles, smartphones and American households.

On July 20, 1969, astronaut Neil Armstrong stepped on the moon declaring, “ That’s one small step for man, one giant leap for mankind. ” The NASA program that got Armstrong there pushed forward technology on rockets and satellites — laying the groundwork for the GPS navigation systems millions of people now use in their smartphones.

‘It’s not frivolous work. We’re ushering in the future.’

But some people might not know it’s also propelled the launch of many more mundane consumer products, including memory foam and air filters for pet odors. We can even thank NASA for the Bowflex home gym whose ads were once a fixture on late-night TV, and for advancing the technology behind all those internet pop-up ads.

The space agency’s inventions are always focused first on aiding missions, Daniel Lockney, technology transfer program executive of NASA, told MarketWatch. But sometimes a product’s cross-application can be clear, he said — like if an invention relates to energy storage or water recycling.

Still, a lot of the extramural uses can be “serendipitous,” he said. “We have the bagful of answers, but we don’t know the questions that are asked.”

Companies come to NASA asking to use patented methods or products. It’s often for manufacturing or industrial use, but there’s sometimes a consumer angle, too.

Most of the “low-running” royalties go back to the inventor, he noted. “We’re, by no means, trying to recoup the cost of investment.”

NASA’s proposed fiscal 2020 budget is $22.6 billion, up 5% from the previous year, according to the Planetary Society, an organization advocating space exploration.

Here’s are some of the ways NASA’s linked to the next big thing:

By 2012, wearable fitness technologies were already on the market from companies such as FitBit /zigman2/quotes/202323205/composite FIT +0.78% . But that year NASA funded a project to see how it could detect astronaut stress levels at different times. Lino Velo and his company, Linea, took on the task.

Velo’s team created several pieces of hardware to monitor brain activity, oxygen levels and heart rhythms, such as wristwatches and a device placed on the forehead.

After the project ended in 2014, one watch, the Zoom HRV, retailed for $129. The California fitness equipment technology company Salutron, which acquired Linea, sold it until 2018, making a business decision to pull it off the shelves rather than compete with the likes of FitBit and Apple /zigman2/quotes/202934861/composite AAPL +1.45% with its Apple Watch.

Salutron President Bob Gerstenberger said the company is focusing now on applying the heart-rate technology to gym equipment. This will let people work out and walk away knowing just how good their workout was that day, he said.

‘If we hadn’t had NASA, we might not be having this conversation.’

“If we hadn’t had NASA, we might not be having this conversation,” said Velo, Salutron’s chief technology officer and executive vice president of technology.

Weightlessness can lead to muscle-mass loss, and fast. In space, during flights of between 5 and 11 days, astronauts can lose up to 20% of their muscle mass, according to research.

That’s where the Bowflex comes in. Inventor Paul Francis had what he called a “SpiraFlex” with springs, cords and resistance plates. He brought it to NASA, and the device had its first space mission in 2000. The product developed further into what become the Bowflex Revolution, which offers more than 100 exercises. Francis told NASA the agency funding “enabled us to take the technology to the next level of development and commercialization.”

Nautilus /zigman2/quotes/206873003/composite NLS -2.33% , the parent company to Bowflex, did not respond to a request for comment. But one company official reportedly told NASA that the Bowflex Revolution “has been our best gym.”

Of all the advances we can thank NASA for, maybe online ad technology isn’t one of them. As internet pages load content, there’s a split-second auction on the page’s ad space. It’s all carried out by computers able to evaluate troves of information and make quick choices. The end result are ads hawking all sorts of goods and services.

Pop-up ads have been around since 1997, and their creator has apologized for the online onslaught. A NASA project from 2004 to 2005 eventually led to more advances in the marketing deluge. The project focused on helping astronauts decide what equipment and devices they needed along a mission’s various phases.

Faculty and graduates at the Massachusetts Institute of Technology were part of a team that built software for the project. By 2009 real-time bidding became the standard for online ad sales, enabled by members of the MIT team, riffing on the research done for NASA.

Some pet owners can thank NASA for fresher-smelling homes. One 2016 NASA contract sought development of a lightweight air filter that could remove toxins, like ammonia, from space suits worn by astronauts. The amounts of toxins can vary, depending on the type of space suit and the person wearing it.

An Illinois company took on the project, creating a filter that clearly changed color when it was spent. The filters are now sold directly to consumers looking to avoid the ammonia smell from cat litter boxes or hamster cages.

By the mid-1960s, NASA was looking for ways to cushion astronauts from the sudden jostles, bumps and jerks of space flight. The end result was a cushy foam material we all now call memory foam, which can be found in everything from pillows to mattresses, bras, car seats and prosthetic limbs.

Consumers today spend plenty of cold, hard cash on the soft substance. The American memory foam mattress and pillow market could reach $8 billion by 2023, growing 9% per year from 2017, according to the market research company Report Buyer.

The T-shirt? That was an earlier military innovation

Overall, U.S. businesses spent $375 billion on research and development in 2016, up 5.3% from 2015, the National Science Foundation said last year.

Company money accounted for $318 billion of the funding, but the federal government was the top outside funding source, pouring in $24 billion of the $57 billion in external funding.

Other parts of the federal government are linked to products finding their way to the mass market. For example, the military popularized the T-shirt.

Lockney said NASA’s efforts to inspire all sorts of market innovations were “part of our DNA.”

“It’s not frivolous work,” he said. “We’re ushering in the future.”