These 7 data points reveal the sorry state of Americans’ finances 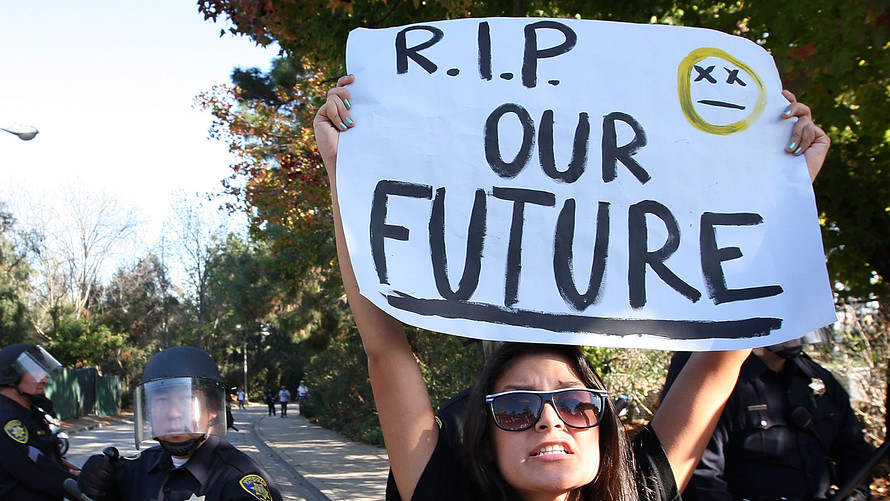 David McNew/Getty Images
Not everyone feels good about his or her financial state.

More Americans may think they’re “living comfortably” or “doing okay,” but many are far from fine.

In a survey of about 5,700 people released recently by the Federal Reserve, respondents said they are doing better than in recent years, but the results show they are still facing tough choices, leading them to make some bad financial moves, from taking on risky loans to undersaving for retirement.

Here are a few highlights:

About 46% of adults who responded to the Fed’s survey said they could not cover an emergency expense of $400 without selling something or borrowing money.

That’s a scary prospect, especially since financial hardships that require some extra money beyond daily expenses are common: 18% of those surveyed said either they, or family members living with them, had some type of financial hardship in the last year, such as a health emergency, losing a job, having work hours or pay reduced or a divorce.

See also: Most Americans have less than $1,000 in savings

Some of those options can quickly lead to further financial problems, as credit cards and loans charge interest, which would lead to mounting bills that those without savings would struggle to pay off.

The Fed report recommends insurance that specifically would cover unexpected financial hardships. Although most adults who responded to the survey said they had health insurance, auto insurance and homeowners insurance (for those who owned homes), only a quarter had disability insurance, and fewer than one in seven had long-term care insurance.

About 22% of those who responded to the survey said they had a major unexpected medical expense for which they had to pay for out of pocket within the last year. The average cost of those expenses was between $2,000 and $3,000. And other respondents said they skipped medical procedures and visits because they could not afford to pay for them.

About 20% said they didn’t get dental care in the last year because they were unable to afford it, 12% went without seeing a doctor, 11% went without prescription medicine, 9% didn’t see a specialist, 7% skipped follow-up care and 5% didn’t get mental health care or counseling.

Unsurprisingly, those with insurance, across all income demographics, were more likely to get medical care than those without.

3. A large number of adults have absolutely no retirement savings

The response varied by age; about half of the survey respondents between 18 and 29 had no retirement savings or pension, about 75% of non-retired people 45 and older had at least some savings.

To avoid that problem, financial advisers recommend living below one’s means, being appropriately aggressive with investments and budgeting for health care (which can cost hundreds of thousands in old age).

And of course, starting retirement saving as early as possible will benefit a future retiree.

Among those who said they were employed but didn’t participate in a 401(k) plan or something similar, 53% said their employer didn’t offer a plan and 19% said they weren’t sure if a plan was offered or not.

4. Even those with retirement savings are unsure how to invest

Among respondents to the survey who have a 401(k), IRA or retirement savings outside of a designated retirement account, only 15% said they were “very confident” about their ability to make the right investment decisions for the account.

See also: Who can manage your retirement better: You or an app?

5. Student loans aren’t the only kind of education-related debt

About 41% of adults who had at least some education beyond high school said they went into debt for those costs.

More than 90% of those respondents said they turned to student loans, 21% said they had credit-card debt that was education-related and 3% said they have a home equity loan or line of credit used for education expenses.

Turning to another type of debt besides a student loan isn’t necessarily bad — if a credit card or personal loan’s interest rate is lower than the student loan a borrower could get, it may even be a smart option.

Adults who completed less higher education reported being further behind on their payments than those who completed bachelor’s and graduate degrees.

6. Many are still not completing higher education

Only 16% of young adults ages 25 to 34 whose parents both have a high school degree or less reported completing at least a bachelor’s degree.

Of course, higher education isn’t necessarily a guarantee of a better financial set-up in the future, as mounting U.S. student debt shows.

However, the survey also showed those who completed a bachelor’s and graduate degrees were less likely to fall behind on their educations than those who did not complete those degrees.

7. People like buying new cars, but don’t always have a plan for how to pay for them

Nearly a quarter of adults surveyed said they or their spouse either purchased or leased a new or used car or truck in the last year.

About two thirds of those who purchased a new or used vehicle took out a loan to do so; half of those loans were from the location where they bought the vehicle and the other half mostly came from a bank, credit union or Internet lender.

And 12% of car buyers who used loans to pay for their vehicle took out a loan with a longer repayment period than the amount of time they planned to own the vehicle.

Car loans make up the third-largest form of debt in the U.S., behind housing and student loan debt. Americans had over $1 trillion in auto loans outstanding in the third quarter of 2015, according to the Fed.