Amy Coney Barrett is likely to be a pro-business justice, if confirmed 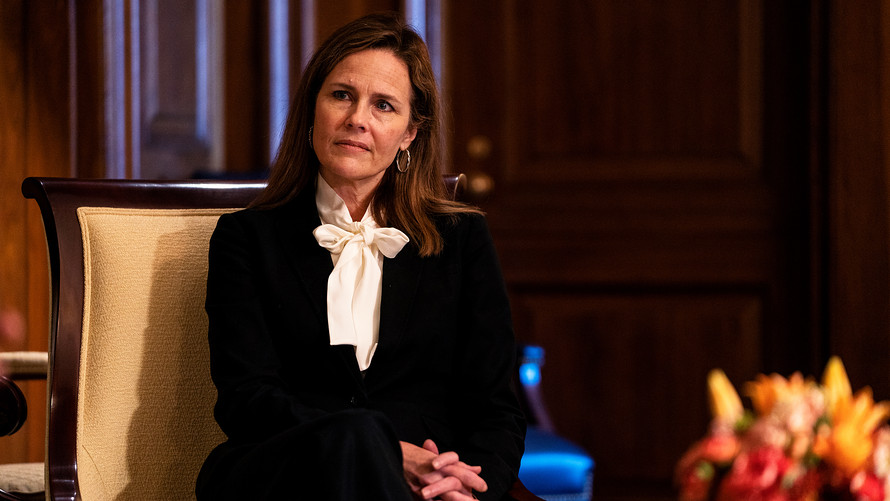 Judge Amy Coney Barrett’s nomination to the Supreme Court has brought the public’s attention to divisive social issues like abortion rights, but replacing the late Justice Ruth Bader Ginsburg with a more conservative figure could have an equally important effect on business regulation and the U.S. economy.

“Barrett is likely to be a pro-business justice, to restrict the ability of government to adopt some economic regulations, and would likely vote to expand the constitutional rights of business,” said Adam Winkler, constitutional law professor at UCLA and author of the book “We the Corporations: How American Businesses Won Their Civil Rights.”

That could be good news for stock-market investors, as analysts have long pointed to the Trump Administration’s efforts to roll back Obama-era regulations and slow the implementation of new rules as a major driver of recent stock-market gains. Since President Trump’s election in November of 2016, the S&P 500 index /zigman2/quotes/210599714/realtime SPX -0.92%  has returned 60.4%, according to FactSet. But it is a potentially troubling proposition for workers-rights advocates and environmentalists who have increasingly relied on agency regulation to achieve their policy goals.

But some conservative lawmakers, legal thinkers and activists argue that the Supreme Court should go further and strike down the EPA’s ability to regulate greenhouse gases whatsoever. Jonathan Wood, attorney at the conservative Pacific Legal Foundation, told MarketWatch that many federal judges have questioned, on constitutional grounds, the ability of federal regulators to use old laws to make new regulations on issues that weren’t on the minds of Congress when those laws were passed, and a more conservative court could potentially make this view the law of the land.

“The idea that the Clean Air act in 1972 answered the question of how to address greenhouse gas emissions is sort of laughable,” he said. “But because courts have been so willing to defer to agency interpretations of statutes, they’ve gotten away with stretching statutes and trying to create policy without having to go back to Congress and say, ‘Oh, we’ve run into a new challenge, we need you to write new legislation to deal with it.’ ”

Of central importance to this debate is the doctrine of Chevron deference, which the Supreme Court established in 1984, and which requires judges to defer to agency interpretation of statutes as long as that interpretation is reasonable. Conservatives have long railed against this principle as one that has led to the growth of the administrative state.

“[Chevron /zigman2/quotes/205871374/composite CVX -1.73%  deference] has become a direct threat to the rule of law and the moral underpinnings of America’s constitutional order,” wrote Sen. Mike Lee of Utah, a Republican, in a 2016 policy brief . “For three decades, Chevron deference has helped to midwife a kind of shadow government operating within the federal Executive. This Fourth Branch of government imposes and enforces the vast majority of new federal laws without being subject to public consent or checks and balances.”

While Judge Barrett doesn’t have a significant track record on questions surrounding Chevron in particular, she does have a history of taking a narrow view of the government’s regulatory powers, said UCLA’s Winkler, pointing to a 2018 case where she voted against the federal government’s assertion that 13 acres of Illinois wetlands were protected under the Clean Water Act.

“That shows that she had a pretty narrow view of an important environmental law,” Winkler said, adding that the environmental movement has relied on broad interpretations of the Clean Air and Clean Water Acts, which were originally passed nearly fifty years ago, given Congressional gridlock over questions like climate change.

Kristin Hickman, law professor at the University of Minnesota and expert in administrative law, told MarketWatch that Congress’ inability to come to a bipartisan agreement on pressing issues of our time has only heightened the importance of issues surrounding agency power.

“There’s no question that gridlock in Congress has exacerbated the Chevron doctrine’s significance,” she said, because Congress has become unable to expediently reform interpretation of statutes through new legislation. At the same time, current Supreme Court justices, including Chief Justice Roberts, and Justices Gorsuch , Kavanaugh and Thomas have all issued written opinions or statements indicating their openness to rethinking court deference to agencies, she added.

Other areas where a more narrow reading of agencies powers to regulate could come into play include consumer protections, with Judge Barrett ruling against the Federal Trade Commission, after it tried to seek restitution for victims of consumer fraud in the case FTC v. Credit Bureau Center . She has also voted against the right of workers to bring certain age discrimination cases in a case called Kleber v. CareFusion Corp .

“She has an expansive view of the constitutional rights of business,” Winkler said. “And she has a very limited view of the rights of workers and the ability of the government to regulate businesses.”