Performance artist David Datuna tells MarketWatch: ‘Its taste was delicious — not like $120,000, but it was really good’ 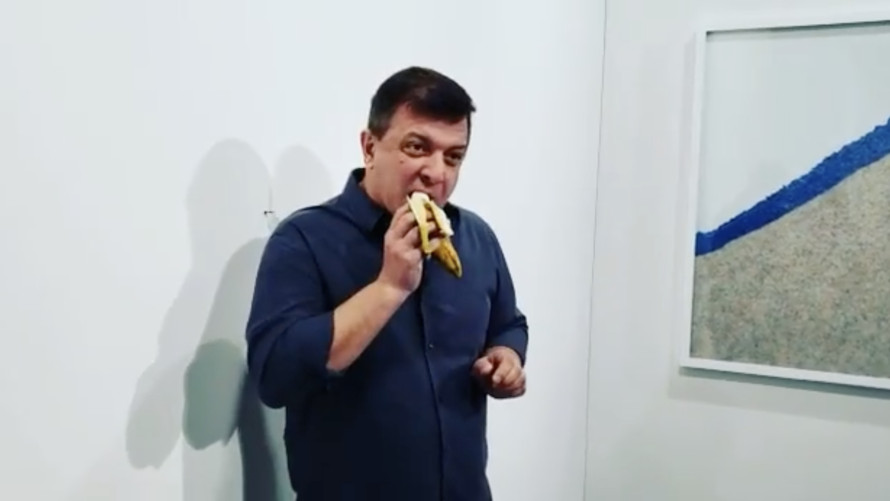 The only thing more priceless than the perfect publicity stunt is a perfectly ripe banana.

After Italian artist Maurizio Cattelan went viral last week for duct-taping a banana to a wall and selling it for $120,000, New York-based performance artist David Datuna took a bite of that action — by plucking the six-figure fruit off the wall, peeling it, and literally eating it in front of stunned onlookers on Saturday afternoon. He called his performance “Hungry Artist.”

Datuna, 45, had his own people film him eating the banana — explaining to the onlookers that this was a performance piece — while the dozens of witnesses filmed it on their own phones. He began circulating the clip on his Facebook /zigman2/quotes/205064656/composite FB +5.30% and Instagram pages.

“Thank you, very good,” he said in between bites.

But the Tbilisi, Ga.-born artist who has lived in New York City for the past 22 years, also told MarketWatch on Monday morning that while it was good, it was a bit overpriced.

And having been stuck to the wall for a few days didn’t make it too bruised or mushy, either. It was just ripe. “It was the absolutely perfect time to eat it,” he said, explaining that he did not eat anything else before or after the pricey produce on Saturday because, “I wanted to feel this banana all day.”

The exorbitant fruit exhibit displayed at the Galerie Perrotin, which Cattelan called “Comedian,” quickly became the most buzzed about and controversial work at this year’s Art Basel festival in Miami. At least two editions of the installation were sold for $120,000, and Cattelan was reportedly shopping around a third, $150,000 version for any interested galleries. Armchair critics and art aficionados alike weighed in, with some calling the concept brilliant, while others mused it was a quintessential example of wealth inequality.

Read more: Someone paying $120,000 for a banana duct-taped to a wall at Art Basel is the perfect picture of wealth inequality

So critics of the work hailed Datuna as a hero for taking a bite out of a single banana that the art world deemed was worth the price 631,579 bananas at Trader Joe’s (at 19 cents each.) Others considered chewing on masterpieces like the Mona Lisa in the name of art.

But the gallery wasn’t laughing. The Miami Herald reported that gallery owner Emmanuel Perrotin was about to head to the airport when he heard that the banana was eaten, and he returned to the Galerie Perrotin “clearly upset.” A guest volunteered their own banana as a replacement, which was eventually affixed to the wall where the original had been. (Neither Perrotin nor Cattelan were immediately available for comment. A spokeswoman for Cattelan told NBC News that the artist is not seeking any criminal or civil action against Datuna.)

“Oh my God, he was really upset,” Datuna said, telling MarketWatch that Perrotin and a couple of police officers took down all of his information, and warned him that he could be arrested for this. They let him return home to D.U.M.B.O., Brooklyn, however, after taking away his Art Basel credentials for this year. He’s not sure whether he will be allowed back in 2020.

“I’m not scared to be arrested. I don’t really care,” he said, noting he’s also done installations in front of Russia’s Red Square, the U.S. White House and in front of Trump Tower in Manhattan without fear. “It’s just art. It’s just a performance. When you do some art, it’s not about [being] scared. You take out your emotions, and you share with the people.”

The gallery also tried making a positive spin on the incident, with a publicist telling the Herald that Datuna “did not destroy the art work. The banana is the idea.” In fact, collectors who buy the work are really buying a certificate of authenticity, as the banana is obviously not made to last indefinitely.

“They were going to change the banana every few days anyway,” Datuna agreed. “So I was not really eating the banana. I was eating the concept.”

When asked how he would feel if someone took a piece of his art and ate it, he responded, “I would say enjoy! It’s fine! It’s all about fun.”

And he swears he has nothing but respect for original artist Cattelan, an art world prankster perhaps best known for creating a $6 million, 18-carat-gold toilet that he named “America.”

“For me, he’s one of the top artists in the world, one of the most interesting artists in the world, and when he did this installation, I think he just did it for fun for everyone. I think it’s really genius,” Datuna said. “So I just had the idea, why can’t I eat it? It’s not about being arrested. This is about a conversation between one artist and another artist, and how artists talk to each other through the art.”

The gallery has had enough of the frenzy surrounding the fruit, however, and took the exhibit down on Sunday because, “The crowds surrounding the installation posed a serious health and safety risk, as well as an access issue, so the work was removed,” according to a gallery statement, which noted that the banana “caused several uncontrollable crowd movements.”