A ‘Powell put’ for the stock market? Don’t even think about it 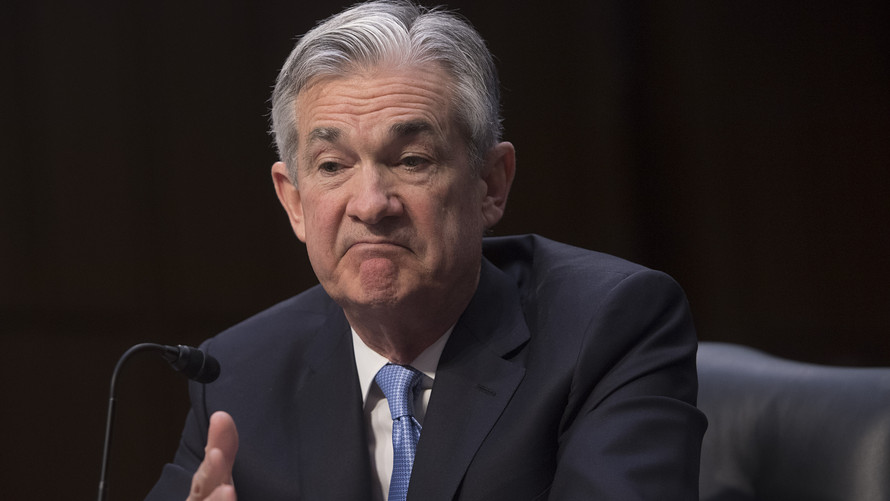 They’re skeptical that a Fed that was already firmly moving toward normalizing monetary policy in the latter years of Janet Yellen’s term at the helm would be easily compelled to change course barring a much deeper meltdown or some other market cataclysm.

For a Fed “that has lamented elevated valuations in the equity market, the selloff in stocks is not especially concerning,” wrote Neil Dutta, head of economics at Renaissance Macro, in a note ahead of Monday’s session with the title: “Don’t even think about a Powell put.”

Archives: Here’s why investors look too complacent about the Powell Fed

Stocks ended sharply lower on Friday, capping the biggest weekly decline for the S&P 500 /zigman2/quotes/210599714/realtime SPX -0.47%  and Dow industrials /zigman2/quotes/210598065/realtime DJIA -0.21%  in two years. Stocks extended the decline Monday, with the S&P and Dow each dropping more than 4% to post the biggest daily percentage declines since August 2011. The pullback, widely described as overdue, comes after a long-running stock market rally saw a “parabolic” acceleration in January that took major indexes to a series of all-time highs.

Investors have talked of a Fed safety net in some form or another at least since the October 1987 stock-market crash prompted the Alan Greenspan-led central bank to lower interest rates. Figuratively dubbed the “Greenspan put,” it was later referred to as the “Bernanke put,” after his successor Ben Bernanke, following the Fed’s aggressive monetary-policy actions in the wake of the financial crisis. It eventually gave way to the notion of a “Yellen put.”

Read: Jerome Powell sworn in as Fed chairman as inflation concerns cause markets to swoon

An actual put option gives the holder the right but not the obligation to sell the underlying asset at a set price, serving as an insurance policy against a market decline. Central bankers dismiss the notion of any sort of a “Fed put,” arguing actions are driven by concerns about financial stability and their economic mandates.

Check out: Why stock market investors might need to worry more about fiscal policy than the Fed

John Higgins, market economist at Capital Economics, argued in an early Monday note that there are two reasons why a Powell put isn’t likely to materialize.

In the chart below, he compares the S&P 500’s performance in 1987 versus its recent setback through Friday: 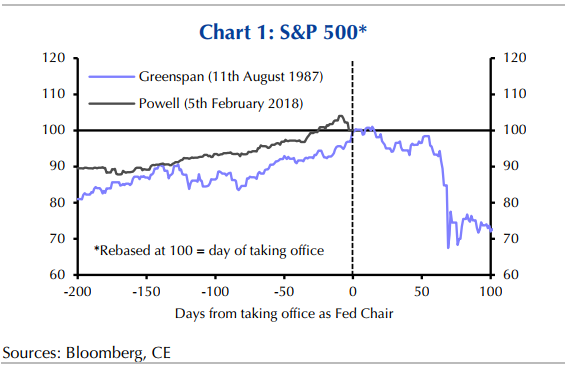 While the loss deepened on Monday, Higgins had noted that the S&P 500 would have to fall “well below 2,000” for Powell to have “as good an excuse today as Greenspan did in 1987 to try to stabilize the markets,” Higgins said.

Second, with a U.S. economy near full employment, it would be difficult for the Fed to refrain from continuing to tighten monetary policy as it would call into question the central bank’s commitment to price stability, he said. Fears that the Fed was falling behind the curve on inflation could drive bond yields up even more to the detriment of the economy.

Higgins noted that while equities had shrugged off rising bond yields for much of January, the stock-market selloff began once real yields, i.e. yields adjusted for inflation, started to rise—a phenomenon that “presumably occurred precisely because investors don’t expect the Fed to allow inflation expectations to escalate.”

“In short, it is way too soon to even be thinking about a Fed put. The strike price is far lower than where equity prices stand today,” Dutta wrote.