Fading trust in government is hurting the response to the coronavirus 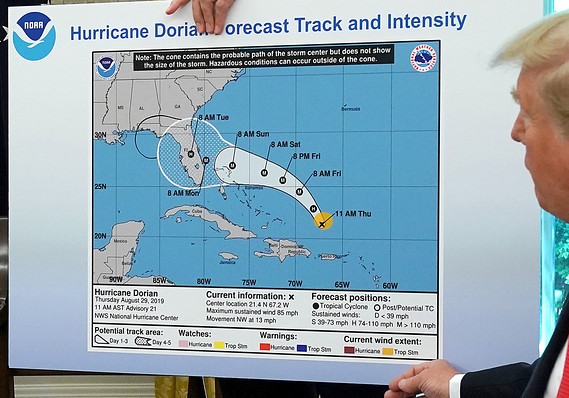 Getty Images
Had the president—like numerous predecessors—not been inclined to lie, deflect, deny and distort about so many things, we’d be in a better position now to deal with this mounting catastrophe.

When the Vietnam War began to heat up in 1965 — the first major deployment of U.S. ground troops was in March of that year — the American Embassy in Saigon (now Ho Chi Minh City) began holding a daily military briefing at 5 each afternoon. An officer, usually a major, spoke of the day’s developments, handing out “facts” and ”figures,” which purportedly showed steady progress by U.S. forces against the enemy.

The problem? The better American reporters in Vietnam, who were experienced, who had additional sources and had been spending time in the field, quickly realized that the briefings were laced with exaggerations and falsehoods. Some simply stopped going, and the briefings came to be known as the “five o’clock follies.”

Meanwhile, far from the comforts of Saigon, television coverage—showing ambushes, firefights and body bags—brought the real story of the war home to Americans each night—undercutting the optimistic fantasy that the government was peddling.

It was the beginning of what has been a decades-long slide in the trust we place in the federal government to do the right thing “just about always or most of the time.”

In October 1964, notes the Pew Research Center, 77% of Americans had such trust; a decade later, after the war and the Watergate scandal, just 36% did. It rebounded somewhat during the Reagan ’80s and Clinton ’90s, and saw brief spikes during the 1991 Persian Gulf War and after 9/11. But it has been sinking ever since and of last week stood at a mediocre 17%. 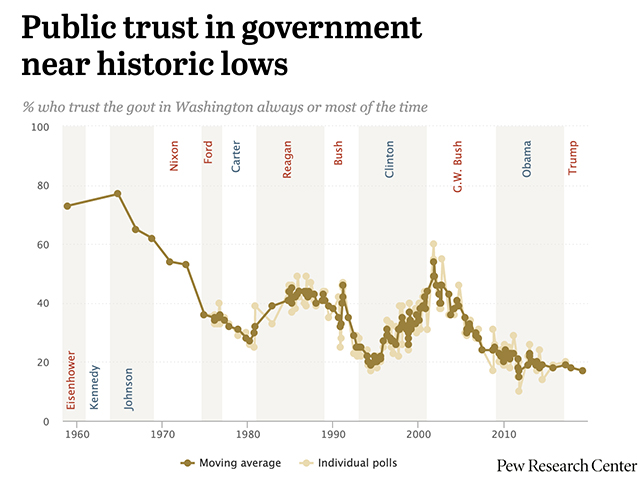 Most Americans used to trust the federal government to do the right thing, but now they don’t.

This distrust can’t be explained away by the hyperpolarized era we’re living in: While just 14% of Democrats and those leaning Democratic trust the federal government today, only 21% of Republicans and those leaning Republican do, claims Pew’s data. The numbers were generally flipped during the Obama era.

This bipartisan distrust looms large today, as the country struggles with the frightening coronavirus crisis, which—in addition to a death toll that even President Donald Trump admits could hit 200,000—has flattened an economy that was slowing rapidly to begin with (gross domestic product grew 2.3% last year, down from 2.9% in 2018).

Trust and credibility are the coin of the realm for any leader. With such qualities, a man or woman in a position of leadership will find that others will follow. At no time is this more critical than during a life-and-death crisis.

One of my favorite examples here concerns John F. Kennedy and the Cuban Missile Crisis in October 1962. The United States and Soviet Union were perilously close to nuclear war; analysts later estimated that half of all Americans could have been killed.

At one point, JFK sent an envoy to Paris to show French President Charles DeGaulle surveillance photos the U.S. had taken of Soviet missiles. The normally prickly DeGaulle waved away Kennedy’s envoy, saying he didn’t need to see the evidence.

“The word of the president of the United States is good enough for me,” the French leader said.

The reservoir of trust and credibility that Kennedy had to begin with not only helped him persuade Americans that his course of action with the Soviets was just, it boosted—if not guaranteed—American efforts to ensure that key U.S. allies would follow.

In the six decades since, presidential trust and credibility has been steadily squandered by both big Iies (Vietnam and Watergate) and lesser ones (“I did not have sex with that woman”). Now, we have a life-and-death crisis that, if Trump’s 200,000 figure holds, would mean a tragedy three-and-a-half times the size of Vietnam, which took, at last count, 58,318 American lives (and that was over a decade).

As of Jan. 20—the third anniversary of his swearing in— President Trump had made “16,241 false or misleading claims in his first three years,” the Washington Post reported . It meant that the president had no reservoir of trust or credibility, and that’s too bad—because that very day, Jan. 20, the first U.S. coronavirus case was confirmed.

Follow the latest news on the election on MarketWatch.

Had the president—like numerous predecessors—not been inclined to lie, deflect, deny and distort about so many things, we’d be in a better position now to deal with this mounting catastrophe. Instead, we were peddled rubbish. Jan. 22: “We have it totally under control.” Feb. 2: “We pretty much shut it down.” Even last week: “’We’ve done one hell of a job.”

You can’t preside over something that’s likely to take 200,000 lives and pat yourself on the back. In fact, Trump said just yesterday that he’s “feeling good” that “only” a few hundred thousand Americans may perish.

The president’s bizarre, self-congratulatory monologues come during his own late afternoon briefings. Does he really think we would believe the word of a president who has lied to us thousands of times? As was the case in Vietnam, the truth lies elsewhere—in this case, places like New York, where the horrors are downright Dante-esque, and the desperate pleas from doctors and nurses for help are shattering.

Trump is the choreographer of his own “five-o-clock follies.” Unfortunately for him, we can see through them easily enough.