A re-election year suggests a low in August

The U.S. stock market tends to follow a specific pattern in the years of presidential re-election campaigns. This pattern calls for reaching a low in August.

In November, the country will go to the polls to elect our next president. With the sitting president running for re-election, it makes sense to look at the performance of the stock market during previous re-election campaigns. This pattern is quite similar across the board, regardless of party affiliation or the election outcome.

The three charts shown here came from Jesse Loxton, an Australian member of the group we run at www.SpikeTrade.com . He plotted the S&P 500 /zigman2/quotes/210599714/realtime SPX -1.04%  for each election year during the past 20 years in which a sitting president was running for re-election, fighting for his political life. 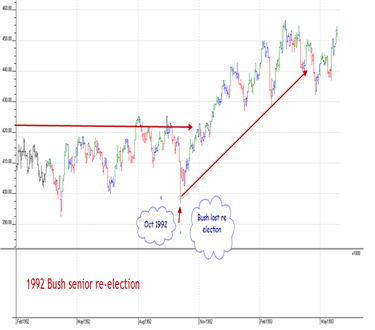 As Bush senior ran for re-election, the stock market stayed under a lid until November, when it exploded in a rally. Other than a quick drop in February, the low for the year was established in October. 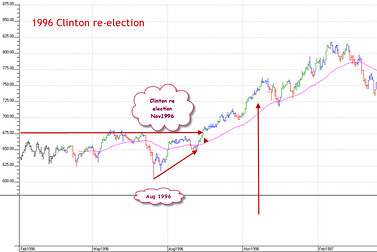 As Clinton ran for re-election, the stock market stayed under a lid until September. The low for the year was established in August, followed by a powerful rally. 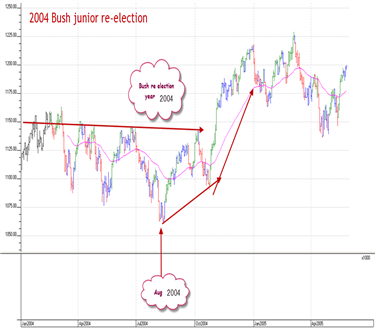 As Bush the junior ran for re-election, the stock market stayed under a lid until October. The low for the year was established in August, followed by a powerful rally.

If this pattern were to persist, the stock market will remain under pressure until the autumn, with a bottom around August and a strong rally into the year-end. The current toppiness of the stock market supports to this idea.