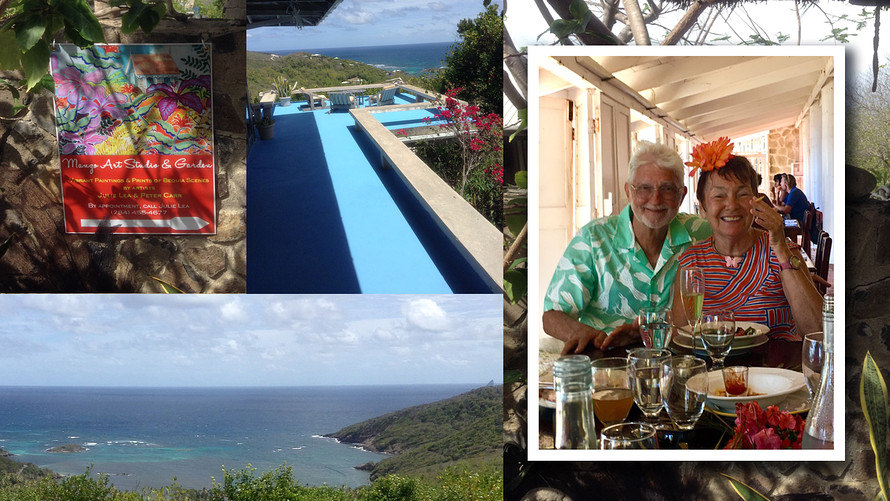 Julie Lea
Doug and Julie Lea and their home in Bequia.

Nestled in her 1960s hillside home perched high above the glittering sea, Julie Lea awakens each morning to the sound of rustling palms, chirping birds and the gentle bleating of goats that wander a nearby farm.

Vibrant flowers burst from the gardens surrounding her home, and if she’s up early enough to see the sunrise — which she often is these days — she watches from her terrace as the West Indian sky goes from black to grey to an eruption of pinks, oranges and yellows.

“There is something magical about life here,” says the 76-year-old artist and painter, who with her writer husband of 50 years, moved full-time to the Caribbean island of Bequia in 2005. “We’re 50 stories above the beach below us, there’s endless sky and clouds and activities, we hear the birds in the trees, we’re surrounded by nature and flowers. There’s a calmness we just love.”

She’s been dreaming of this life since 1978, when she first saw Bequia from the deck of a steel-hulled sailboat that she and her now-retired husband Doug — who were then living in Virginia with two sons — had chartered with friends. Enchanted by the rich turquoise of the waters and the lively parade of people, “I started drawing pictures the minute we anchored in the bay,” she says. “I was instantly enchanted by this island.”

Though Doug had originally hoped to retire in France and even went on a few road trips through the country scouting spots, “he quickly realized the winters are cold there,” Lea — who says she never questioned that Bequia was the spot for them — jokes, adding that he’s happier in Bequia and indulges in French-language movies on the island. So after a series of vacations and shorter-term stays in Bequia, the couple bought their home there in 2005. Lea now owns her own art gallery in the town, where she earns money selling her paintings; and Doug is retired from his former publishing career and loving it: “His idea of dressing up now is putting on a belt,” jokes Lea. 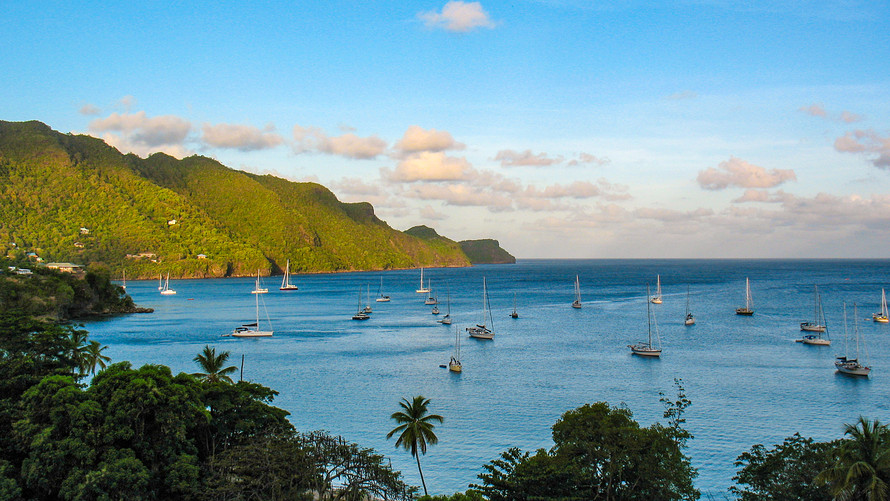 But Bequia, which is part of the Grenadines in the Caribbean, isn’t for everyone: It’s only 7-square miles and home to only about 5,000 people. The mosquitoes are fierce, the summer can be hot, and the pace is slow (people will hop out of their cars in the middle of the road to chat with one another). But it has plenty of pros, too: Daytime temperatures are in the 80s most of the year, it’s not overrun with big resorts and tourists (it’s sometimes referred to as “the Caribbean as it once was”), and the beauty is straight out of a postcard. “These are the beaches of my dreams,” Lea tells MarketWatch.

What does it cost to live in Bequia?

While Lea doesn’t follow a strict budget — at nearly 77 (her birthday is in July) she jokes that she’s earned the right to a little help like a housekeeper and gardener — Lea says that if you’re frugal: “You can do it on $2,000 to $3,000 a month.” Lonely Planet offers this breakdown of costs on the island, and Retire in the Caribbean notes that retiring in the Grenadines “is lower than many Caribbean countries. Many expats find it to be similar to their home country or less expensive,”

While real estate can be pricey (some of the nicer homes cost over $1 million), there are still listings for around $300,000 and places for rent under $1500 a month. Food can also be expensive: While locally grown fruits and veggies are more affordable, prepare to pay far more for the many things that have to be shipped or flown into the island. (This is true of the other consumer goods as well.) Lea says that eating out on the island can also be expensive, and she and Doug rarely do it.

The Leas save money on utilities by having solar panels and eating many foods from the garden — and Lea drives a 1995 Suzuki (which coincidentally broke down right before our scheduled interview; she’s friends with the repair person in town so it all worked out and cost her only about $75). They also don’t use a washing machine (she washes most of her clothes by hand and hangs them on the clothesline, when that’s not possible, she takes them to the laundromat and for about $13 has an attendant wash, dry and fold all of their laundry). They built a water filtration system so they get their drinking water from rainwater.

What is your favorite thing about Bequia?

Lea says she loves may things about Bequia — the calmness, the laid-back lifestyle, the natural beauty — but also, she says, the islanders themselves hold a special place in her heart. “I love their friendliness and self sufficiency,” she says. They welcome ex pats — many of whom come from America, Canada and the U.K. (though most of them only spend part of the year in Bequia) — often stopping you to chat (English is the native language). 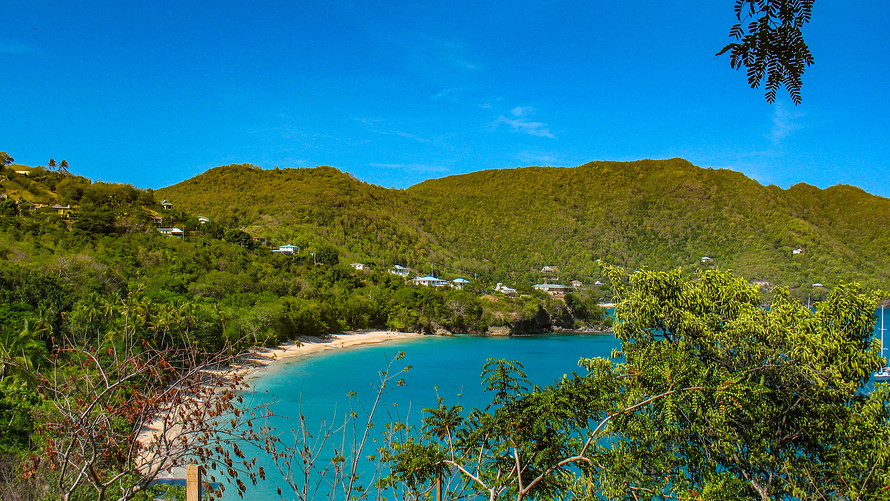 W hat is the health care like in Bequia?

The island has a small hospital, pharmacy, and a clinic, but if you need a major procedure, you will need to take a speedboat or plane — there’s an air ambulance service to get you off the island — to a larger hospital like one in Kingston on the island of St. Vincent. And Lea says that for major procedures some of her friends have flown back to the United States for health care ( here are details on how Medicare — which usually doesn’t cover health care you get abroad — might work in a situation like this). She hasn’t had to do that yet, and gets her annual checkups when she needs them at the local clinic, where she’s had a “lovely” experience and the staff were kind, she says. For minor treatments you can get care for free, but ex pats usually leave a donation, she adds. She also notes that there is a dental facility in the hospital — “in the winter months, a lovely retired dentist, and his wife/long-time assistant offer their services” — and an optometrist visits Bequia about once a week for an eye clinic.

Do you have citizenship?

Lea is a permanent resident of Bequia, which she joked wasn’t that difficult but did require “a lot of waiting around” and paperwork. You can find details out on how to do this here. You don’t have to be a citizen to buy property in Bequia, but there are some hoops to jump through.

Lea had dreamed of making Bequia her permanent home for 30 years before it happened, and now it’s her happy reality (though she admits it’s not for everyone and most expats only spend part of the year there): “We live very peacefully here — we are close to nature, we know where the moon is each night, we follow the stars, we watch the sun rise,” she says. “I’m so grateful to live here.”