All that glitters might be just what your portfolio needs now

Don’t go chasing leprechauns and rainbows. These ETFs may be just what you want. 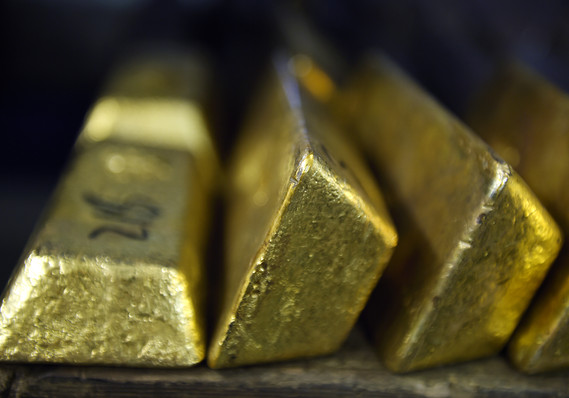 Bloomberg News
Gold bars sit in a vault at a refinery.

As market turmoil heats up, investors see opportunity in them thar hills.

Gold /zigman2/quotes/210034565/delayed GC00 +0.89%   has had a strong run this year, gaining over 18% in the year to date, and exchange-traded funds that track it have also performed well. That run may not be over: analysts say gold could see more of a tailwind from geopolitical tensions and concerns about global growth.

“Gold would stand to benefit from continuing declines in real interest rates and from its role as a currency alternative,” strategists at Ned Davis Research said Monday. “Unlike the fiat currencies, gold would not face political pressure for it to weaken.”

That is, gold is what it is. It’s not the creation of sovereign governments jockeying for position in trade and other skirmishes.

There’s another, somewhat more technical, reason gold is shining so brightly. Central banks in emerging markets, including Russia, China, and others, have so far this year bought the most gold on record, according to the World Gold Council, whose records go back 19 years.

“Since gold is priced in dollars around the world, non-U.S. central bank buying is a way for them to have dollar exposure (desirable if your own currency is under pressure) without owning Treasuries or other U.S.-backed financial assets,” he said.

Even better, Colas noted, “for governments that have an axe to grind to Washington, buying gold is one way to store value without helping the U.S. government fund its $1 trillion/year deficit. In fact, they likely have to sell Treasuries to fund these purchases.”

Any substantial foreign central-bank selling of Treasury notes hasn’t yet shown up in yields, which remain near three-year lows /zigman2/quotes/211347051/realtime BX:TMUBMUSD10Y 0.00% . (As a reminder, bond yields fall when prices rise.) In fact, as yields around the world tumble, even into negative territory, that only makes gold a more attractive safe-haven play, the Ned Davis analysts noted.

It’s gained more than 17% in the year to date, with most of that increase coming over the past few months, as market volatility has picked up.