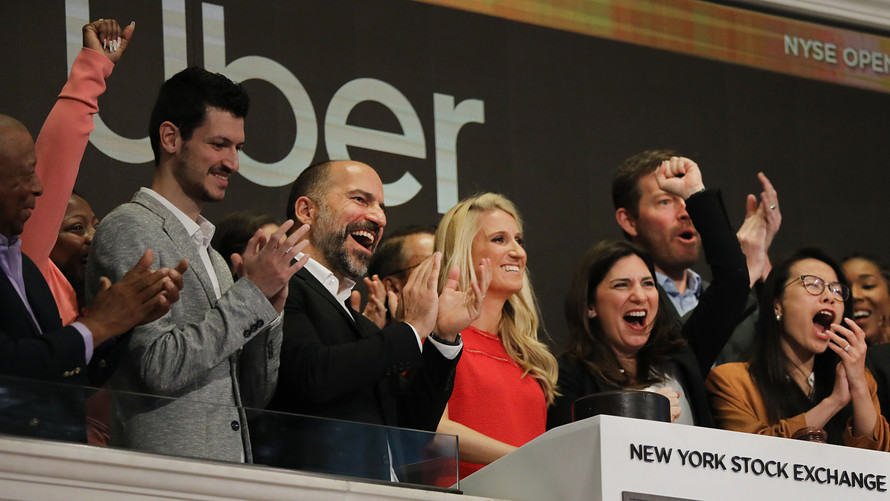 The stock, which went public at $45, has since tumbled to a fresh low of $32.59. Total losses by outside investors, to date, total more than $2 billion.

That includes untold millions lost by Uber drivers who were invited to take part in the IPO as part of a loyalty program.

Do you sell out now before you lose any more? Or should you hang on and hope they recover?

Those who lost money are faced with a conundrum familiar to anyone who’s ever traded shares and seen them go south. Do you sell out now before you lose any more? Or should you hang on and hope they recover?

As ever, if there was a certain answer, well, everyone would be rich. Personal-finance experts generally warn against risking more than 5% of your portfolio on an individual stock, especially one that is high risk.

A growing chorus on Wall Street have turned skeptical on the stock. Everywhere, experts are quick to highlight all the problems. Uber’s business model is uncertain, they say. Losses are ballooning. The company is young. Management is untested. The stock is overvalued. It’s unclear if it will ever make a profit. No wonder the IPO has been such a disaster, they’ll tell you. You should sell out now, they say.

Trouble is, I wasn’t just quoting what Wall Street is saying about Uber.

Revolutionary new companies like Uber, Amazon, Google /zigman2/quotes/205453964/composite GOOG +0.86%  and Facebook are simply impossible to value properly in their early days. They usually face turmoil as they ramp up, and they face lots of doubters.

When I went back and looked through the newspaper cuttings from the early days of other “game changing” and internet “platform” type companies, I found a lot of the same things being said about them that are being said now about Uber.

My favorite report during my research was about Amazon in 2000. It warned that Amazon could be at risk of bankruptcy.

My favorite was a research report in 2000 warning that Amazon could be at risk of bankruptcy.

“The combination of negative cash flow, poor working-capital management and high debt load in a hypercompetitive environment will put the company under extremely high risk,” the analysts wrote.

Amazon stock halved on two separate occasions in 1999. It peaked late that year at $107. By October 2001, one month after the terrorist attacks in New York, it was $6.

Facebook’s initial public offering in 2012 was a disaster. Technical glitches were followed by a stock collapse, and growing doubts about the company’s future. Wall Street was also apparently shocked by the $1 billion the company paid for a niche website with no future.

Similar trouble walloped the stock of Netflix /zigman2/quotes/202353025/composite NFLX +1.52%  in its early days, and again in the crisis of 2011, when CEO Reed Hastings messed up pricing issues, drove away customers, and needed to raise extra money. The stock price plunged by three quarters.

Analysts are good at taking financials and extrapolating recent trends into the future. They cannot see around corners.

OK, so there’s a lot of selection and survivorship bias here. For every Amazon, Facebook and Netflix that went on to prosper, there were hundreds of other ventures that failed.

The point is not that Wall Street doubters somehow predict future success, but that future successes are often hammered early on by grave, widespread doubts. Wall Street finds it very hard to value truly revolutionary companies. Analysts are good at taking current financials and extrapolating recent trends into the future. They cannot see around corners.

Yet as a young reporter working in London I bought Amazon stock in 2002 at $12 when everyone seemed to be predicting the company’s demise. The “enterprise value” — stock plus debt — was trading at an eye-watering valuation of more than 100 times “earnings before interest, tax and depreciation.” But by then I’d been using the company for years. I was blown away by the service and performance. I could see the company was stellar, and revolutionary, and was leaving its competitors in the dust. After that, it was a matter of faith.

(I owned the stock till 2006, when I went to work — for Jim Cramer at TheStreet — and was required to sell all my individual equities.)

It’s easy to see the bear case on Uber. It’s losing money, and analysts predict losses at least through 2023.

It’s easy to see the bear case on Uber. It’s losing money, and analysts predict losses at least through 2023. Costs, regulations and competition may wipe out any future gains. The accounting losses last quarter were an eye-watering $5.2 billion. Gross profits — revenues minus “cost of revenues,” “operations” and “support” — halved. Maybe the company will vanish, or get taken over.

The bulls have not yet “capitulated” on the stock, suggesting it may yet fall further. Most analysts are still bullish, at least in public. Despite the plunge in the stock, the company is still valued at a massive $50 billion net of cash. That’s more than three times next year’s sales — a hefty rating, though not astronomical. (Facebook bottomed out, last year, at more than five times sales — but Amazon fell below one times sales in the 2001 crash.)

Still, it’s hard to dispute that Uber passes the “Amazon” test. The company has changed how we travel, commute, and even where we live. The brand is already global and generic, like Kleenex. Meanwhile, the actual cash losses are much smaller than the big, headline numbers would suggest.

Bottom line: Hanging on to this stock isn’t just a matter of calculation. It’s a matter of faith.