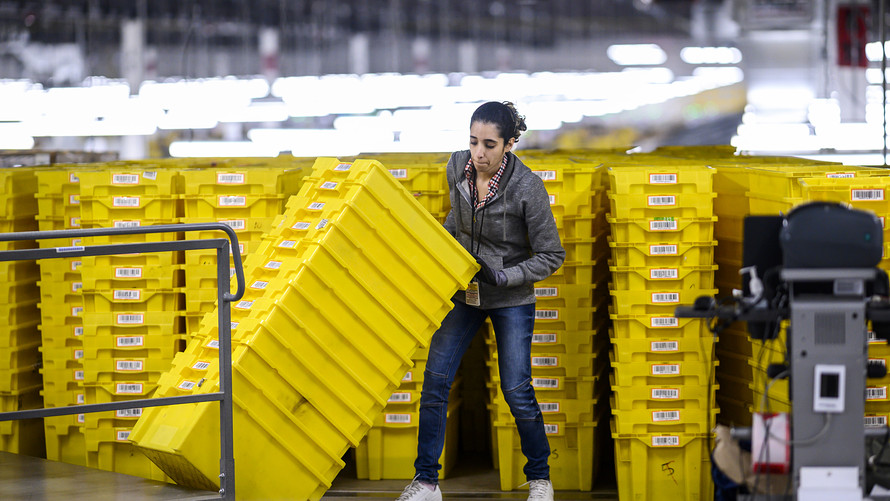 JOHANNES EISELE/AFP/Getty Images
A woman works at a distribution station at the 855,000-square-foot Amazon warehouse in Staten Island, one of the five boroughs of New York City. Employees are protesting workplace conditions at Amazon on Prime Day, its biggest shopping event of the year.

Amazon /zigman2/quotes/210331248/composite AMZN +0.91%  employees in four countries have gone on strike amid the company’s biggest discount shopping holiday of the year to protest their working conditions and benefits and to demand better pay.

More than 100 workers in the U.S. in Minnesota, and thousands of workers in Germany, organized by the labor union Verdi, and across Europe in Spain and Poland are striking on Prime Day, Amazon’s annual sale, with the slogan “No more discount on our incomes.”

‘Testing hundreds of thousands of workers physical limits as though they were trained triathletes is the wrong approach.’

The strike comes as Amazon, which employees more than 600,000 people globally, extended the Prime Day sale for the first time ever to two days from July 15 to July 16 and promised one-day delivery on many items. Employee advocates say that will put more physical pressure on workers to keep up with demand.

The strikes began Sunday night at Amazon facilities in Europe and at a warehouse — or “fulfillment center” in Amazon’s corporate parlance — outside of Minneapolis and are expected to continue all day Monday. One U.S. Amazon warehouse employee in Minnesota said she’s expected to physically handle and drop off 600 items per hour while staying on her feet continuously, the Washington Post reported.

Employee advocates slammed Amazon’s history of allegedly mistreating its workers in the U.S. and around the globe, and urge the need for more humane working conditions.

More than 2,000 employees in Germany were protesting, CNN reported , and in Minnesota more than 100 Amazon employees are going on strike .

Don’t miss: Amazon is spending $700 million retraining workers, but critics say it should attend to other housekeeping duties first

“Amazon fulfillment workers were already facing speeds of 200 to 300 orders per hour in 12-hour shifts before the new policy. They were struggling to maintain that pace, even before the one-day shipping policy was announced,” Stuart Appelbaum, president of the Retail, Wholesale and Department Store Union , said in a statement.

“Testing hundreds of thousands of workers physical limits as though they were trained triathletes is the wrong approach. Operating at these speeds for this duration means Amazon needs to hire more workers, under more sustainable speeds that don’t put worker’s lives in jeopardy. Amazon needs to understand that human beings are not robots.”

Amazon has come under fire in recent years for its allegedly inhumane working conditions for warehouse workers clocking.

Amazon has come under fire in recent years for its allegedly inhumane working conditions with warehouse workers clocking in long hours of intense physical labor and some reportedly being fired for taking bathroom breaks.

The Seattle-based company has also faced criticism for failing to increase wages and implement unionized labor while many of its low-wage workers rely on the Supplemental Nutrition Assistance Program (SNAP formerly known as Food Stamps).

The company instituted a $15-an-hour minimum wage in 2018, and Amazon founder and chief executive Jeff Bezos has said he wants other companies to follow his lead.

The average U.S. Amazon worker made just over $34,000 a year in 2017, according to the Securities and Exchange Commission filings. To compare, the median household income was $61,372 that same year. Amazon’s global sales for Prime Day are estimated to reach $5.8 billion, according to Coresight Research.

In a separate move, the civil rights group Muslim Advocates launched a campaign Saturday to urge Americans to support efforts to stop what the group described as religious discrimination against Amazon’s Muslim and East African workers.

‘We can only conclude that the people who plan to attend the event on Monday are simply not informed.’

The group filed charges with the Equal Employment Opportunity Commission contending that workers had been denied prayer time and were passed over for promotions, as well as other alleged discrimination. Muslim Advocates asked consumers to donate the cost of a Prime membership, $13 per month, to support the legal work to fight for workplace changes.

The Seattle-based company has defended the treatment of its workers in the past arguing that it provides benefits so that employees don’t need to unionize.

Last week, the e-commerce giant announced a retraining initiative spending $700 million to retrain 100,000 U.S. workers, around one-third of its U.S. staff, to allow workers to obtain “highly skilled technical and non-technical roles” in corporate offices, retail stores and warehouses amid increased automation in warehouses. Workers who participate in the program are not obligated to stay at Amazon, the company explained.

“Events like Prime Day have become an opportunity for our critics, including unions, to raise awareness for their cause, in this case, increased membership dues. These groups are conjuring misinformation to work in their favor, when in fact we already offer the things they purport to be their cause — industry leading pay of $15 per hour, benefits, and a safe workplace for our employees,” an Amazon spokeswoman said in a statement.

“We can only conclude that the people who plan to attend the event on Monday are simply not informed. If these groups — unions and the politicians they rally to their cause — really want to help the American worker, we encourage them to focus their energy on passing legislation for an increase in the federal minimum wage, because $7.25 is too low.”