Amazon’s stock flips the technical script to success from failure with first close above $3,200 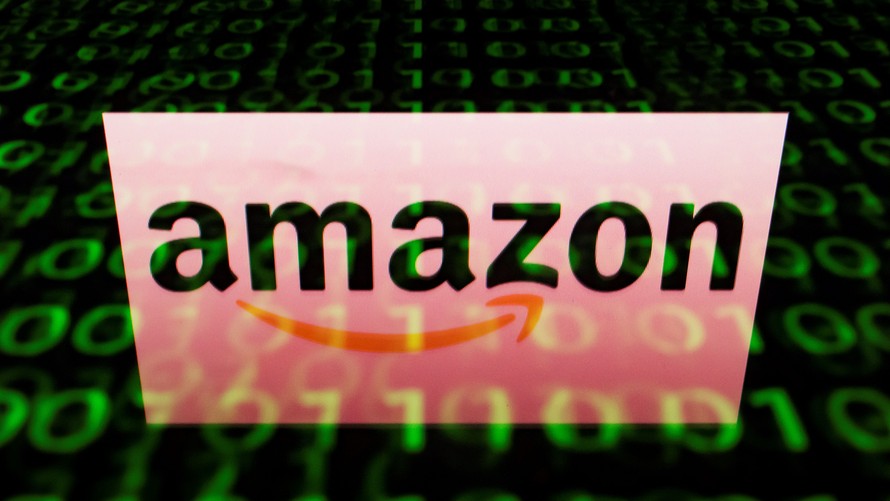 Despite the huge rally in Amazon.com Inc.’s stock this year during the COVID-19 pandemic, and despite increasing regulatory concerns, there was one thing the stock has failed to do — close above $3,200.

It wasn’t easy but after climbing above $3,200 a little after 1:30 p.m. Eastern, the stock /zigman2/quotes/210331248/composite AMZN -1.79%  seesawed around that level multiple times, before a final push above it with minutes to spare in the session. It closed at a record $3,205.03, up 73.4% on the year, less than a week after the e-commerce and cloud giant reported record second-quarter profits.

Don’t miss : Amazon promised to spend its profit amid pandemic, but ended up with record earnings anyway.

Before Wednesday, the stock had traded above $3,200 intraday five times over the past month, including three times when the stock opened above that level, but failed to sustain those gains into the close. The best it had previously done was to close right at $3,200.00 on July 10.

All those previous failures, and a 1.2% decline early Thursday to an intraday low of $3,165.43 before bouncing, could have appeared to be a warning for bulls that bears remain in charge, but it looks like more of a sign suggesting exactly the opposite. The stock ended up rallying 0.6% Thursday to close at $3,225.00. 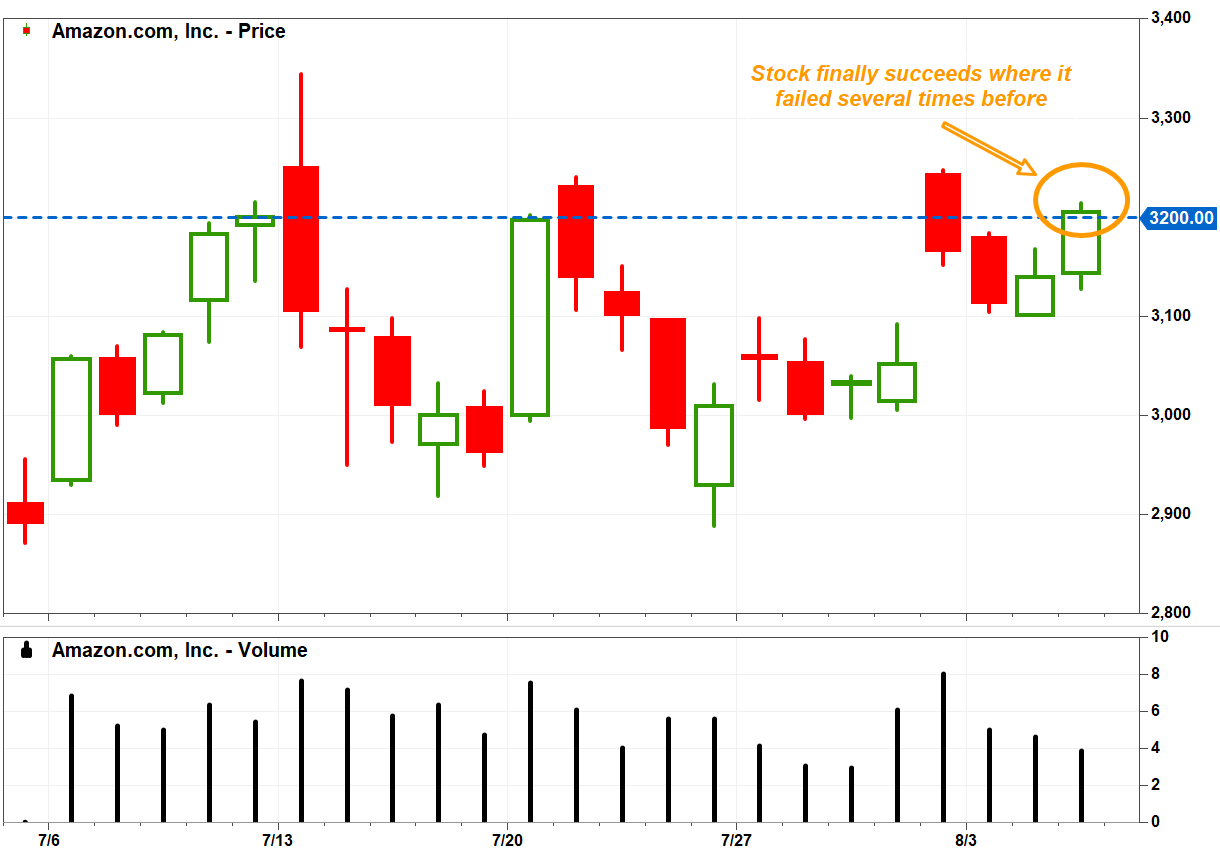 Wall Street traders will tell you that one of the best tells of a market is when something should happen, but doesn’t. If there is negative fundamental news, or a big seller in the market, but prices just won’t go down, then it is probably time to buy. And even if there is an initial selloff, the more times the market comes back to test previous resistance levels, the more likely an eventual breakout becomes.

Here are some technical reasons why Amazon’s stock “should” be near a top though:

The price is trading nearly 50% above its 200-day moving average , which many chart watchers define as the longer-term trend line. O’Hara said that’s the widest stretch above that trend line in over a decade. “It would be healthy for the price to pause after the strong advance,” O’Hara told MarketWatch. Read more about the 200-day moving average.

• O’Hara also highlighted the three days in which the stock opened well above $3,200, rose even more intraday, only to pull sharp U-turns and close below that level. “A common theme for those three days is the strong daily volume showing strength from sellers,” O’Hara said.

He said the volumes on those days were well above the monthly average, a signal of how aggressive bears were in selling.

• The time of year is also something to consider. Over the past 10 years, said O’Hara, August has been the fourth worst month of the year for Amazon’s stock. “Seasonally, we need to be cautious,” O’Hara said. 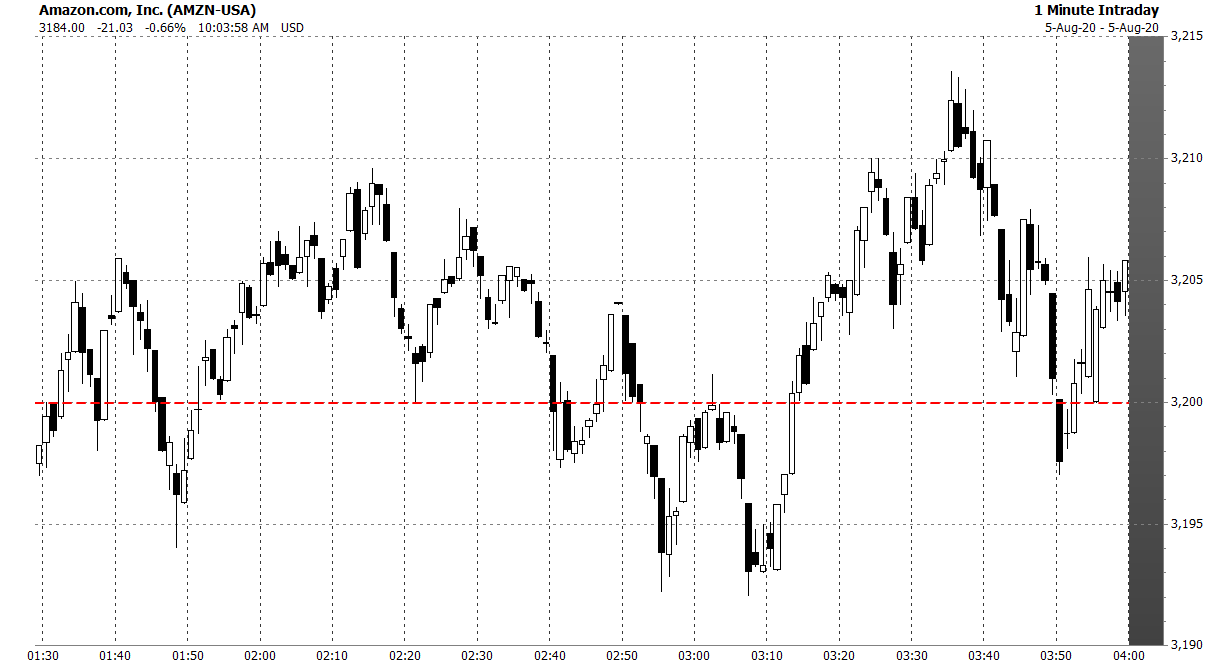 Despite these negatives, bulls just won’t go away.

“But overall, we are not sounding the alarm as it is healthy for a stock to consolidate after such strong gains,” O’Hara told MarketWatch. “A break above $3,250 will be a large positive, as it will show the bears are out of ammunition.”

From the buyers perspective, it is a bit like the rope-a-dope strategy employed by Muhammad Ali against George Foreman: Cover up and take the punches, and let the opponent tire themselves out, then counterpunch. Blow out second-quarter results, and the rise in stocks of Amazon’s peers, could also weaken the sellers’ resolve.

And keep in mind that this selling pressure above $3,200 isn’t the first negative technical signal during the stock’s run up in recent months. There was a classic “key reversal day” pattern on May 21, but the stock’s weakness lasted for just days before the rally resumed.

Amazon’s stock would need to break below the July 24 intraday low of $2,888.00 for O’Hara to turn “cautious.” And he will become “increasingly more concerned” if the stock fell below the 50-day moving average, which many use as a guide to the shorter-term trend. That line currently extends to about $2,843, according to FactSet.

Again, the negatives O’Hara sees are shorter-term in nature. For the longer-term, he said the trends are “undeniably positive.”