There’s a difference between job growth in red, blue and swing states 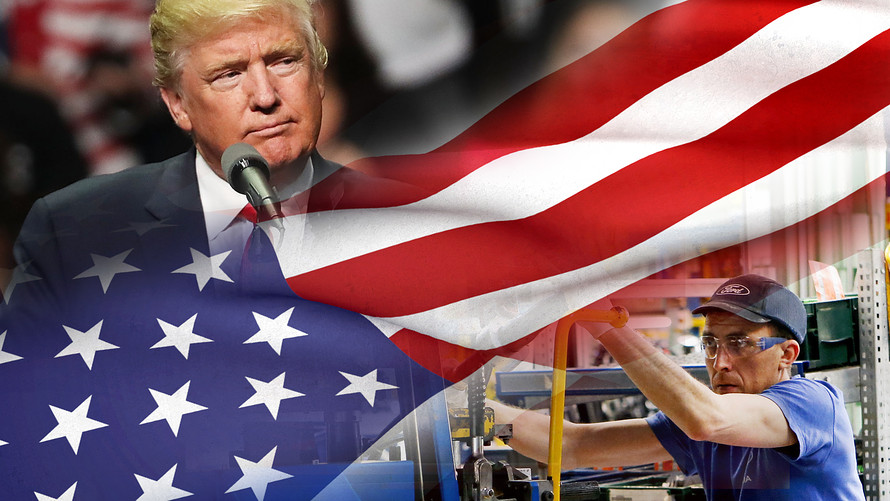 President Donald Trump’s focus on jobs in middle America both before and after the election clearly resonated with his base . Speaking to David Muir on ABC Wednesday night, he said the crowds who came to see his inauguration were the “forgotten people.”

By at least one measure, he may have a point: New data shows that states that voted for him have had the most lackluster job growth. Since 2015 there has been a noted drop in jobs growth (as the graph below shows) and more so in red rather than blue states, according to data released by Jed Kolko, chief economist for jobs site Indeed.com. Kolko crunched state Bureau of Labor Statistics data released Tuesday. Globalization and technological advancement have restrained growth in U.S.-based manufacturing jobs. At the same time, the technology sector has continued to surge. 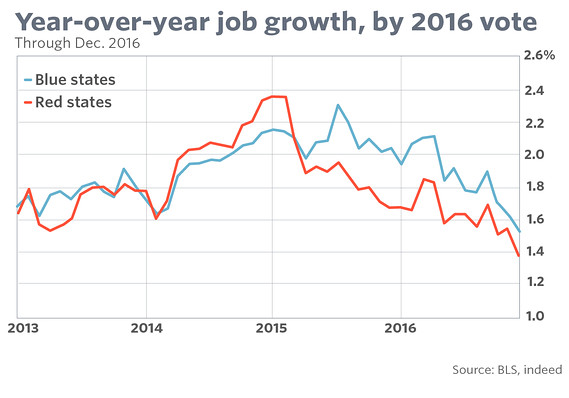 Kolko classified the states as red or blue based on whether they voted for Trump or his Democratic rival Hillary Clinton in the 2016 presidential election.

“We know that many of the voters who propelled Donald Trump to victory were in rural areas,” says Mark Hamrick, Washington, D.C. bureau chief at personal finance website Bankrate.com. “Generally, these are areas of the country, like my own hometown in Kansas, which have seen declining population precisely because of a lack of economic opportunity. By contrast, people are attracted to areas where jobs are available or even plentiful, which tends to reinforce the cycle.” The lure, for some, of New York, Los Angeles and San Francisco, which also benefit from immigration, were firmly in Hillary Clinton’s camp, he adds.

Job growth is an important, but separate, measure of growth from unemployment. The latter is a key measure of the health of the economy, but not the only — or even necessarily the best — from the monthly jobs report, according to the Pew Research Center, a nonprofit think tank in Washington, D.C. “Simply being out of work isn’t enough for a person to be counted as unemployed. He or she has to have been available to work and actively looking for work, or on temporary layoff,” Pew analyst Drew DeSilver wrote . Recent data also shows that more people have quit jobs voluntarily while the rate of quitting and hiring has remained stagnant.

Job growth is an important, but separate, measure of growth from unemployment. The latter is a key measure of the health of the economy, but not the only — or even necessarily the best — from the monthly jobs report.

Despite the noted differences in actual job creation in blue and red states, an improving economy helps all states, Bankrate.com’s Hamrick adds. Red and blue states are connected to the fortunes of the U.S. economy, with perhaps oil-producing states being the major exception. “Globalization and technological advancement have restrained growth in U.S.-based manufacturing jobs,” he adds. “At the same time, the technology sector has continued to surge. The decline in crude oil and commodity prices interrupted the boom in those sectors and regions reliant upon them although we may well have seen the worst of that since prices have rebounded.”

Another theory for the difference in growth: all 25 “right-to-work” states, which voted Republican in 2016 except for Virginia, had 1.5% growth year-over-year in December 2016 versus 1.35% in those states that don’t compel workers to join or pay dues to labor unions, says Mark J. Perry, professor of economics at University of Michigan-Flint. Excluding the right-to-work states of North Dakota and Wyoming, where there has been a slowdown in oil production, the jobs in those other 23 predominantly-Republican right-to-work states actually grew by 1.6%, Perry adds.

The unemployment rate, meanwhile, ticked up to 4.7% in December 2016 from 4.6% the previous month, the BLS data showed earlier this month, but it still ended at the lowest point it has ended any year in 10 years . As Kolko’s graph suggests, the economy added just shy of 2.2 million jobs last year, the lowest gain in four years. It’s a complicated picture : the unemployment rate for December in the key 2016 election swing states was marginally higher than the national average of 4.7% in Ohio (4.9%), Michigan (5%), Florida (4.9%), and actually lower in Wisconsin (4%).

On the plus side, unemployment rates were significantly lower in 10 U.S. states in December compared with the previous month, higher in just one state (Alabama), and stable in 39 states and the District of Columbia, the U.S. Bureau of Labor Statistics separately reported . New Hampshire had the lowest unemployment rate in December (2.6%), followed by Massachusetts and South Dakota (2.8% respectively. Alaska and New Mexico had the highest jobless rates (6.7% and 6.6% each).

Also see: As America debates alternative facts, George Orwell’s ‘1984’ is No. 1 on Amazon

And with the election of Trump and his vocal focus on bringing back manufacturing more jobs, Republican voters appear to be more optimistic, recent research suggests. Some 77% of Republicans think that their personal finances will improve over the next four years, compared with 44% of Independents and just 19% of Democrats, according to the credit reporting firm Experian, which surveyed about 1,000 U.S. adults from Nov. 10 to Nov. 21, just after Republican Donald Trump was elected president.