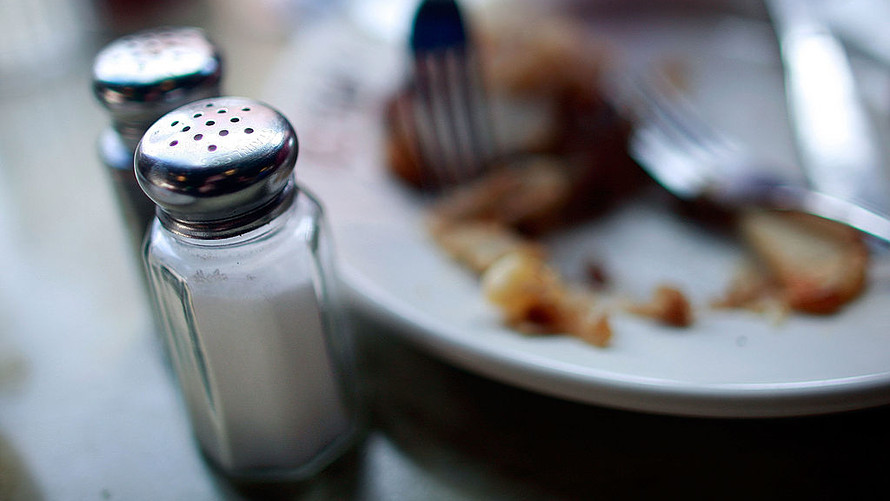 As unhealthy relationships go, this one could take years off your life.

Americans are consuming way too much salt, according to a recent report by the government’s U.S. Centers for Disease Control and Prevention. They’re consuming around 3,400 milligrams of salt per day, the study conducted between 2013 and 2014 found. People should consume less than 2,300 milligrams of sodium each day, the CDC recommends; those aged 51 and over and African-Americans should limit that to 1,500mg. (To put this in a real-world context, a Big Mac from McDonalds /zigman2/quotes/203508018/composite MCD +0.18%  has 960mg of sodium.)

But while fewer people are drinking soda and eating red meat, and other food deemed unhealthy in 2017, they’ve become more relaxed about sodium. The percentage of people who actively avoid having salt in their diet fell to 39% in 2015 from 46% in 2014, having remained relatively steady for the previous decade, a separate 2015 survey of more than 1,000 adults by market research group Gallup previously found. And this isn’t because they just can’t seem to avoid it. Some 35% of people said they try to include salt in their diet, up from 28% a year earlier.

Why the love affair with salt and not soda? Many Americans regard salty snacks are a “comfort food” with 62% of consumers eating salty snacks as a stress reliever, compared to 16% of consumers who attributed stress as a reason for snacking on salty treats one year ago, according to market researcher Mintel. “Consumers are looking for ways to manage their well-being, and the impact of food on emotional and mental health is becoming more important,” said Amanda Topper, associate director of food service research at Mintel. Sales of salty snacks reached $10.2 billion in 2015, up 29% in five years, with sales projected to climb an additional 22% to $12.4 billion in 2020. 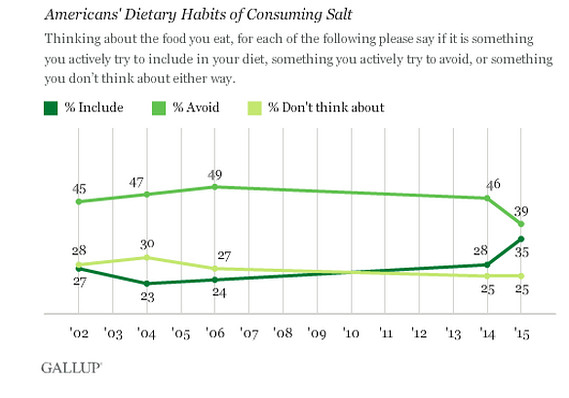 Despite gravitating toward a saltier diet, Americans should strive to consume less salt, according to CDC guidelines . Nearly 9 in 10 U.S. children eat more sodium than recommended and about 1 in 6 children have raised blood pressure, which is a major risk factor for heart disease and stroke. Americans get most of their daily sodium—more than 75%—from processed food and restaurant food, the CDC says. Such foods are high in sodium, so it’s difficult to reduce your daily sodium intake if you don’t cook your own food, or if you eat pre-made sauces or meals. “Together, heart disease and stroke kill more Americans each year than any other cause,” the CDC adds.

Low-calorie diets have caught the public imagination more than low-salt diets. There is an increase in sugar-free drinks, and lower-calorie and organic products in supermarkets. There was a 96% increase in the availability of lower-calorie products between 2008 and 2012 versus a slight 4% increase for higher-calorie food and beverages, a recent analysis of Nielsen data covering 16 major food and beverage companies by the Hudson Institute, a conservative-leaning think tank based in Washington, D.C., found. And last year bottled water overtook soda as the No. 1 drink.

Fat is also making a comeback among Americans, the Gallup study found, although many nutritionists are now less critical about the perceived dangers of a high-fat diet. The latest edition of the government’s “Dietary Guidelines for Americans,” does not include a recommended maximum limit on fat intake. Not everyone was convinced by the slew of surveys in recent years that suggest people are trying new healthy (or fad) diets. “One must take such opinion surveys with a grain of salt,” says Mike Jacobson, executive director for the Center for Science in the Public Interest, a Washington, D.C.-based think tank.

(This story was updated.)