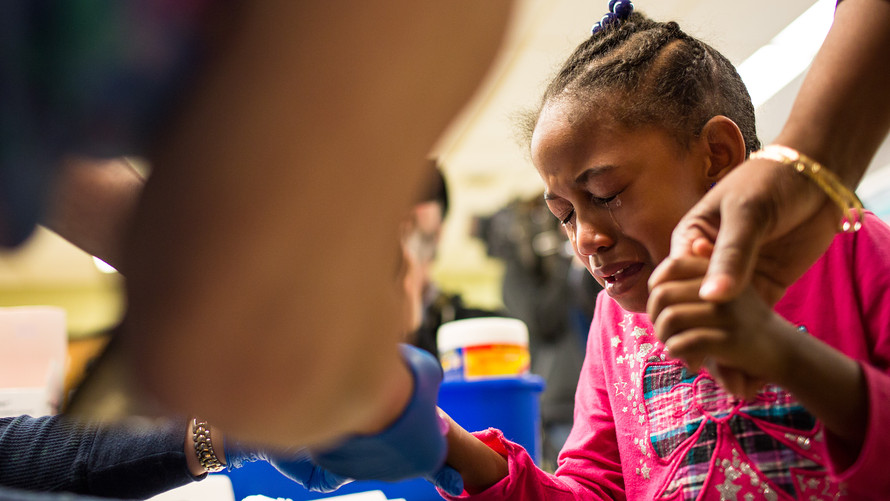 Getty Images
Tears stream down the face of 5-year-old Morgan Walker as she gets her finger pricked for a lead screening at Eisenhower Elementary School in Flint, Mich.

Most municipalities in the U.S. have more in common with Flint than you’d think.

Flint, of course, brought the danger of lead-poisoned water to the fore, yet that crisis represents only the tip of an iceberg that is the eastern Michigan city’s — and the rest of America’s — water worries.

From the kitchen tap to the toilet to dams, canals and levees, the nation’s aging water systems are reaching a crisis point, prominent water experts and civil engineers warn.

“Like the rest of the U.S., Flint has serious infrastructure issues,” said Marc Edwards, a professor at Virginia Polytechnic Institute and State University who was instrumental in bringing the poisoned state of Flint’s water supply to light. “You can only neglect this for so long before you’ve got a very, very serious problem on your hands.”

Flint’s troubles began when, after switching the water supply’s source to the Flint River from the Detroit water utility, the city decided not to add an anti-corrosion chemical to protect the water from the lead pipes carrying it. For each dollar the city saved on that chemical, it will cost $10,000 in infrastructure and short-term programs to aid Flint residents, Edwards said. And that’s not counting the cost of long-term health issues.

‘Like the rest of the U.S., Flint has serious infrastructure issues. You can only neglect this for so long before you’ve got a very, very serious problem on your hands.’

For Flint and other cash-strapped cities, drinking water and wastewater systems may look like easy places to make cuts, Edwards said, since such infrastructure by its very nature is out of sight and out of mind.

But the same goes for federal- and state-owned water storage systems — dams, canals, levies and the like — which date back 50 or even 100 years, said Upmanu Lall, director of the Columbia Water Center at Columbia University.

This large-scale infrastructure, which protects communities from floods and droughts, is likely in the worst shape, according to Gene Stakhiv, an associate research scientist at Johns Hopkins University and a visiting scholar at the Army Corps of Engineers’ Institute for Water Resources. Stakhiv dubbed this issue a “union of Sisyphus and Pandora” in a 2003 journal article.

For example, though reservoirs help regulate the water supply in a variety of ways, not a single new one has been built in 25 years, population growth notwithstanding, according to Stakhiv.