U.N. welcomes move, calls for peace talks as next step 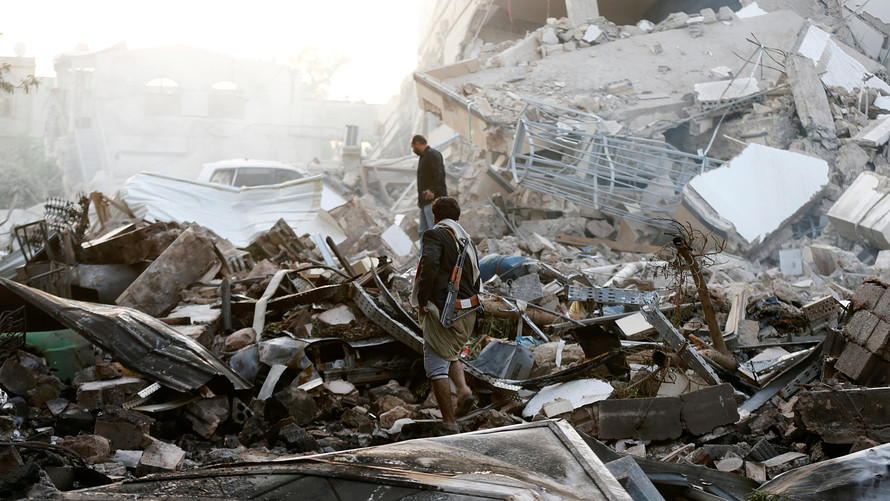 Reuters
Men walk on the wreckage of a building destroyed by Saudi air strikes in Sanaa, Yemen, in June 2018.

CAIRO — The Saudi-led coalition fighting the Iranian-backed Houthi rebels in Yemen announced Wednesday that its forces would begin a cease-fire starting Thursday, a step that could pave the way for the first direct peace talks between the two sides that have been at war for more than five years.

In a statement carried by Saudi Arabia’s official state news agency, a Saudi military spokesman, Col. Turki al-Malki, said that the ceasefire would last two weeks and that it comes in response to U.N. calls to halt hostilities amid the coronavirus pandemic. He said the ceasefire could be extended to pave the way for the parties “to discuss proposals, steps, and mechanisms for sustainable ceasefire in Yemen ... for a comprehensive political solution in Yemen.”

There was no immediate reaction from Houthi leaders or Yemen’s internationally recognized government to the coalition’s statement.

U.N. Secretary-General Antonio Guterres, who called for a cease-fire in all global conflicts on March 23 to tackle the virus, welcomed the announcement, saying: “This can help to advance efforts towards peace as well as the country’s response to the COVID-19 pandemic.”

He called on Yemen’s government, which is backed by the Saudi-led coalition, and the Houthis “to follow through on their commitment to immediately cease hostilities” and to engage with each other without preconditions in negotiations facilitated by U.N. envoy Martin Griffiths.

“Only through dialogue will the parties be able to agree on a mechanism for sustaining a nation-wide ceasefire, humanitarian and economic confidence-building measures to alleviate the suffering of the Yemeni people, and the resumption of the political process to reach a comprehensive settlement to end the conflict,” Guterres said in a statement.

Guterres said earlier this month that warring parties in 11 countries had responded positively to his appeal for a global cease-fire to tackle the virus. Guterres said then that the world faces “a common enemy — COVID-19,” which doesn’t care “about nationality or ethnicity, faction or faith.”

Heavy fighting in Yemen between coalition-backed government forces and the Houthis killed more than 270 people the past 10 days, government officials and tribal leaders said Wednesday. The two sides are battling over for the key border province of Jawf and the oil-rich central province of Marib. The officials spoke on condition of anonymity because they were not authorized to brief the media, while the tribal leaders did want to be quoted by name out of fear of reprisals.

The flare-up in fighting came at a time Saudi Arabia intercepted a missile targeted at their capital, Riyadh, late last month. The Houthis frequently launch missiles across Yemen’s border into Saudi Arabia, but it’s rare that they reach the capital.

The war has proved costly for Saudi Arabia and has damaged its image abroad. The calls for peace come amid a trying time. The country is engaged in an international price war over the cost of oil, having pushed its production higher to try to take back market share from Russia and the United States. International rights groups criticized Saudi Arabia over the conflict and the humanitarian toll. Saudi Arabia is also battling the coronavirus outbreak, with 2,932 confirmed cases and 41 deaths.

Iran, which backs the Houthis, is also facing challenges at home. As the worst-hit country in the Middle East, it has 67,286 confirmed COVID-19 cases and 3,993 deaths.

Al-Malki said the ceasefire was aimed at “building confidence” between the two warring parties and to support the United Nations-led initiative to end the war.

In a statement, the U.N. special envoy for Yemen welcomed the coalition’s announcement, saying it comes at a “critical moment for Yemen.”.

“The parties must now utilize this opportunity and cease immediately all hostilities with the utmost urgency, and make progress towards comprehensive and sustainable peace,” Griffiths said.

Yemen, the Arab world’s poorest nation, has been convulsed by civil war since 2014. That is when the Iranian-backed Houthis took control of the country’s north, including the capital of Sanaa. The Saudi-led military coalition intervened against the Houthis the following year, conducting relentless airstrikes and a blockade of Yemen.

Past attempts at ending the conflict have stalled. A 2018 peace agreement, brokered by the U.N. in Sweden, led to a rough road map to end fighting in the key port city of Hodeida but brought little actual progress. The talks proposed by Al-Malki would be the first face-to-face negotiations since the war started. In addition to representatives from the Houthis and Yemen’s internationally recognized government, al-Malki said a Saudi military team would also be present.

The conflict has killed over 100,000 people and created the world’s worst humanitarian crisis, leaving millions suffering from food and medical care shortages and pushing the country to the brink of famine.

Authorities in Yemen have yet to announce a confirmed case of the coronavirus, but experts fear the virus could eventually prove deadly there after the years of devastation by the war.