Another stock market worry: The year leading up to a presidential election tends to be below average

Conventional wisdom, as usual, has it wrong 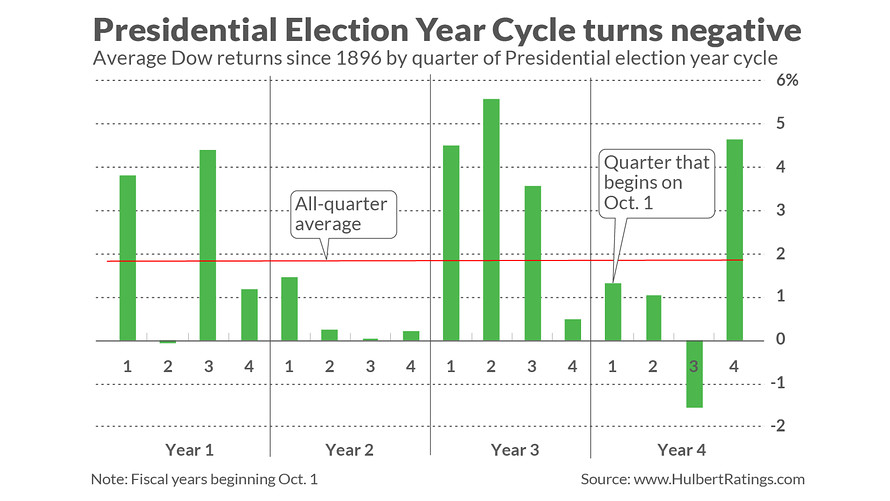 CHAPEL HILL, N.C. (MarketWatch) — Be on guard against one of the popular bullish rationales making the rounds on Wall Street.

I grant that this rationale makes a certain amount of sense. Any president, whether he is Democrat or Republican, wants to be re-elected, and is presumably willing to go to great lengths to make sure the economy and the stock market are soaring as Election Day approaches.

Some think the situation will be different this time around, since President Trump has proven himself particularly willing to do whatever it takes to win.

Surprisingly, history provides little support for this rationale. On average, the best year for the stock market is the third year of the four-year presidential cycle. The period leading up to the election itself tends to be below average for equities.

In the past, in fact, this below-average period has begun in the June-through-September quarter of the year prior to the election. That’s the quarter we’re in now. Furthermore, this period of disappointing performance tends to last for three successive quarters, as you can see from the accompanying chart.

What accounts for these results that are so counter to conventional wisdom? One big factor is the uncertainty created by the approaching election. Investors loathe uncertainty. In an email earlier this week, Doug Kass of Seabreeze Partners Management emphasized this uncertainty in a prediction: “Recognition of Trump’s behavior and possible weakness at the polls could result in investors being concerned about a Democratic victory in November 2020.”

Another reason: The stock market discounts the future, reflecting what’s likely coming down the pike in several quarters or years, even. So the market sees through any politically motivated economic or market stimulation, recognizing that any short-term boost will have to be corrected.

Some think the situation will be different this time around, since Trump has proven himself particularly willing to do whatever it takes to win. He’s already been especially critical of the Federal Reserve chairman that he himself appointed, for not reducing interest rates, and it undoubtedly has not escaped his notice that a single tweet about the course of his trade negotiations with China can send the stock market soaring.

I tend to discount that argument. Trump is hardly the first president to be ruthless in pursuit of re-election, and yet pre-election strength does not show up in the data.

To be sure, Trump is unique in the annals of presidential politics in defining his success in terms of the stock market. But that is a double-edged sword, since it increases the likelihood that the market will see through any politically motivated market manipulation.

The bottom line: Be my guest if you want to argue that the stock market will perform well between now and November 2020. Just don’t base your argument on the next year being the fourth year of the presidential cycle.