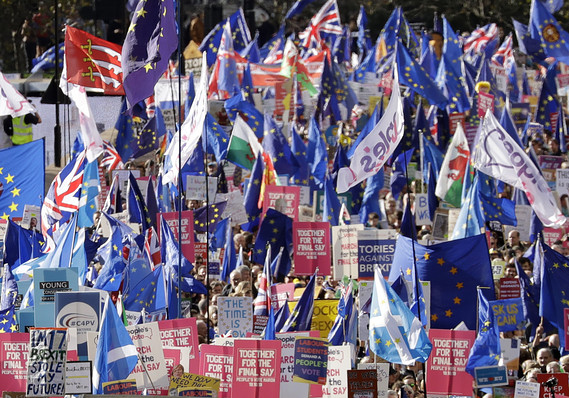 Associated Press
Anti-Brexit protestors march in London, Saturday, Oct. 19, 2019. Britain's Parliament is set to vote in a rare Saturday sitting on Prime Minister Boris Johnson's new deal with the European Union, a decisive moment in the prolonged bid to end the Brexit stalemate. Various scenarios may be put in motion by the vote.

Protesters, many wearing blue berets emblazoned with yellow stars symbolizing the EU flag, poured out of subway trains and buses for the march to Parliament Square on Saturday.

In one side street, a group of demonstrators with bells strapped to their legs and wielding sticks performed a traditional English morris dance and chanted: “Morris, not Boris!” to cheers from onlookers.

One of the dancers, Kate Fisher, says “demos that are fun and joyful are more effective.”

Elsewhere, the mood was less cheerful.

Sarah Spoor, who cares for her two children with disabilities, choked back tears as she said she is “distraught” at the prospect of Britain leaving the EU.