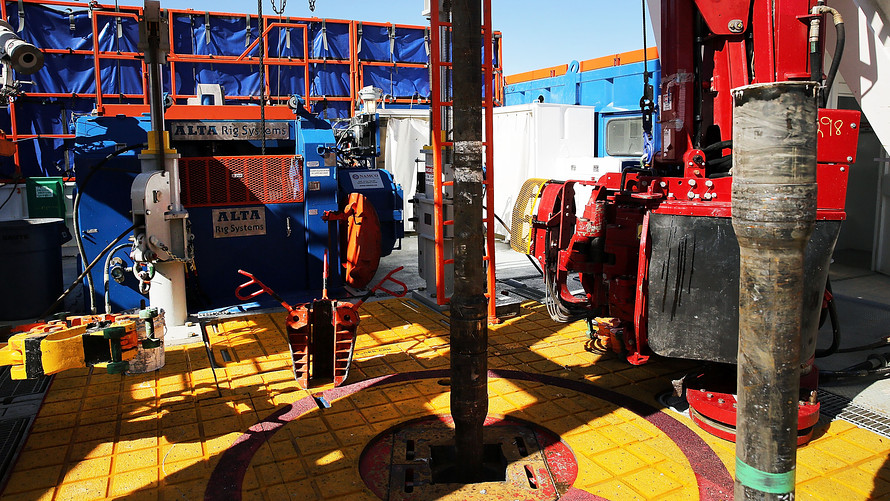 Shares of Apache Corp. got drilled Monday, to close at the lowest price seen in 18 years, after the oil and natural gas producer provided a disappointing update of its first exploratory well in Block 58 offshore Suriname.

The stock, which led all decliners in the energy sector and the S&P 500 index, was on track to suffer the biggest one-day decline since the financial crisis.

The company /zigman2/quotes/200648444/composite APA -2.10%  said before Monday’s open that drilling operations on the Maka Central - 1 well began in late September, with an expected drill time of 30 to 60 days.

“Upon reaching a depth of approximately 6,200 meters, the company elected to conduct various testing activities in two distinct Upper Cretaceous play types,” the company said in a statement. “Following the completion of these tests, the company will set casing, making equipment modifications to the rig, and resume drilling in mid-December to evaluate a third play type in the Cretaceous. The new target depth of the well is approximately 6,900 meters.”

The company said it will provide another update only when the company is prepared to characterize the results.

Analyst Neal Dingmann at SunTrust Robinson Humphrey said the update was a “negative for the stock,” as Apache didn’t discuss any production results from the first two tested Cretaceous targets, and said it would have to drill an additional 700 meters to test a third target.

“Given our view that the stock has become relatively binary dependent upon Suriname results...we believe shares could underperform today given the perception of the first two targets not (being) prolific potentially decreased confidence in the economic viability of the position,” Dingmann wrote in a research note.

The selloff bucked the relative strength in the broader energy sector, which was the only sector of the S&P 500’s 11 key sectors not to lose ground, as crude oil futures /zigman2/quotes/209723049/delayed CL00 -0.77%  surged on hopes for production cuts.

“We continue to believe that a future oil/condensate discovery would be a material positive for the stock while a gas discovery/dry hold could cause the stock to trade down,” Dingmann wrote. “Following today’s announcement, we don’t anticipate any additional commentary from the company surrounding Suriname until late January/early February 2020.”

Get news alerts on Apache Corp. — or create your own.