Apple has gapped up following its earnings report. Its relentless decline following that knee-jerk rally points to lower prices ahead.

This is our third post on Apple /zigman2/quotes/202934861/composite AAPL -0.82%  in the Trading Deck series. On April 12 we published "Parabolic move makes Apple a short." On the day it closed near $623 we wrote: "A parabolic rally marks the terminal stage of a bullish trend. Every rally in history that went parabolic ended in a drastic drop."

On April 23 we published an update "Apple dip not done yet. Next stop $500." While the stock closed near $572 prior to earnings release, we wrote: "Shorting AAPL is no simple matter, and it's certainly not a game for beginners. On a day when AAPL rallies $20, holding a short feels like being strapped into a fighting chair on a fishing boat, with an 800-pound marlin at the end of the line. Before you put on a trade, think of what size you would be able to hold on such a day."

Never underestimate market's ability to overshoot reasonable expectations. Apple gapped up $50 following its earnings report. The crowds cheered, but AAPL closed lower than it opened on the day of its gap and has been sinking ever since. Since it is now trading below the level at which we published our latest update, it is a good time to review our technical signals.

We use technical analysis because we believe that market prices reflect all current actionable information. We use chart and indicator patterns to calculate the odds of rises and declines. 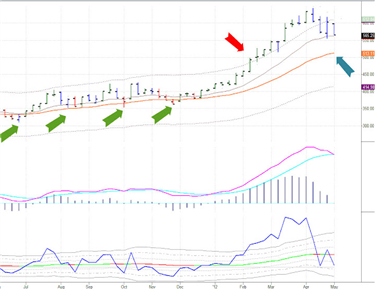 We use weekly charts to make our strategic decisions. When AAPL broke above its upper channel line (red arrow), it alerted us to its parabolic behavior. A slow 26-week moving average (the orange line) represents a long-term consensus of value among masses of traders. It shows a well-established pattern: AAPL keeps rallying away from value and then returning to it, in areas marked with green arrows.

If you think that the trend of AAPL is still bullish, it is reasonable to expect another pullback to the value line. That line was at a $513 last Friday, as marked here with a blue arrow. On the other hand, if you think that the parabolic rise in AAPL has been broken and a bearish trend has began, we have a much lower target.

Whether you're a bull or a bear, the current pattern of AAPL reconfirms our first target of $500. We will re-evaluate AAPL and set our next target in another update when it approaches that level.