Shareholders quiz about $40B 'war chest;' plans to 'keep powder dry' for now

CUPERTINO (MarketWatch) -- Apple Inc. CEO Steve Jobs told shareholders Thursday that the company's massive $40 billion cash hoard provides "tremendous security and flexibility," but also hinted that the company would not rule out a big "opportunity" if one presented itself.

Jobs was quizzed several times about the cash balance -- one of the largest in the tech industry -- during Apple's annual shareholder's meeting at the company's annual meeting on Thursday at its headquarters in Cupertino, Calif. 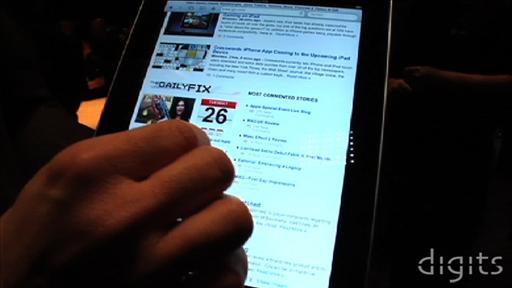 MarketWatch's Dan Gallagher joins Digits from the Silicon Valley, where he previews Apple's annual shareholders meeting. The Digits panel looks at the key issues facing the company. Plus, Palm shares tumble after the company acknowledges that its new smart phones aren't selling as well as hoped.

Apple /zigman2/quotes/202934861/composite AAPL -2.27% closed 2009 with nearly $40 billion in the bank, in the form of cash, short-term and long-term marketable securities. That "war chest," as one shareholder described it, has fueled speculation about what the company might do with the funds. Options could include large acquisitions or returning cash to shareholders in the form of a buyback or dividend.

Problem is, Apple has never paid a dividend, and has rarely bought back its own stock.

The company is also one of the least acquisitive in the tech business, having made only a dozen merger deals in the past decade. The largest deal the company has ever done was only worth $400 million, when it acquired Next Software in 1996 in the deal that brought Jobs back to the company.

"When you take a risk, you jump in the air, and it's nice to know that the ground is still there," Jobs said in response to one query, adding that the company is run "very conservatively."

But he also suggested that doing something big was not out of the question.

"You never know what opportunities lie around the corner," he said. "We are a large company now. So to move the needle, we need to think big."

On dividends, he said paying a large dividend, or buying back a large chunk of stock, would not increase value for shareholders.

On Thursday, Apple's stock rose 0.7% to $202, bucking a sell-off tech stocks and the broader market. It's more than doubled in the past year.

Two days ago, Apple's chief operating officer, Tim Cook, told an investors' conference that the company does not undertake acquisitions in order to increase its revenue or market size. The company's deals are focused on acquiring new technology or talent, he said. See full story on Cook's comments.

Jobs said the flexibility of having a lot of cash provides a lot of value. While he joked about throwing a large toga party, he declined to speculate on other potential uses for the cash. One shareholder recommended the company buy the electric car maker Tesla, while another suggested that Apple build its own video-game development studio.

"Our judgment and instincts tell us to leave the powder dry for now," he said.

He also spoke passionately about the company's efforts to improve its environmental impact. Two shareholder-sponsored resolutions related to the environment and sustainability were again defeated at the meeting, but Jobs said Apple is "way ahead" of its rivals in this regard. Apple actively audits its suppliers on the materials used and other factors, for example.

"Other companies talk the talk but do not walk the walk," Jobs said. "That satisfies a lot of folks in the sustainability community, but the real work is not getting done."