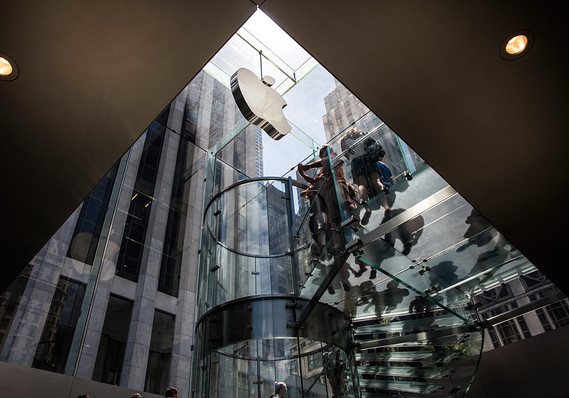 There are lots of "known unknowns" to assess as Apple reports third-quarter earnings after the close today. There are the line items like iPhone 7 sales, units shipped, iPhone selling prices, and gross margins ... and factors like China, Tim Cook's spin on business, guidance. and whether a new laptop will be released.

Looking at the charts, however, one can strip away the fundamental pre-EPS hype to look for clues about the likely reaction to Apple’s /zigman2/quotes/202934861/composite AAPL +4.08%  earnings release. These charts can help determine if Apple is positioned for a disappointment, an upside surge, or a neutral reaction.

The daily chart (which you can see here ) shows that Apple has carved out a 16-month rounded-base formation, or accumulation pattern. Every time Apple pressed into the 93-90 area since August 2015, it found buying interest, which created a series of significant, elevated-volume lows that formed a big base of support.

In addition, let's notice that Apple on the daily chart crossed from beneath to above its 200-day exponential moving average (EMA) at 103.00 in late July, then successfully retested the up-sloping EMA at 104.40 again in September, after which Apple rocketed to 116.00 (thanks in-part to the Galaxy Note 7 debacle).

Apple has been trading between 112.00 and 118.00 for the past month, digesting its sizeable multi-month gains from the 92.00 area, allowing time for all of the "trading moving averages" on the chart to turn up into steepening, positive (bullish) slopes. The price structure is perched right near the high of the entire May-October up leg, poised for upside continuation, especially if a bullish catalyst emerges.

Currently, Apple is consolidating just 1.2% beneath its Oct. 10 high of 119.00, while the SPX is trading 2% beneath its Aug. 15 all-time high at 2193.81 and will confront heavy resistance in any effort to revisit its mid-August peak.

A third chart (which can also be seen here ) illustrates Apple's relative strength compared to the Nasdaq 100 /zigman2/quotes/208575548/composite QQQ +3.26%  since late July (Apple represents 10.8% of the QQQ, and is its largest component). The relative-strength pattern alerts us to two potentially significant characteristics about Apple. The first is that Apple is outperforming the QQQ, the pattern of which exhibits bullish form, and indicates that money is more confidently moving into Apple and out of the QQQ within a developing risk-on environment. Investors typically move money into the QQQ from its underlying components to achieve a greater measure of safety (risk-off). Just the opposite is happening now.

The second characteristic is that the larger four-year relative strength pattern suggests strongly that Apple will continue to outperform the "safer" QQQ in the upcoming months.

What might we expect for Apple in the aftermath of its forthcoming earnings report? Apple presents a very compelling independent technical picture, as well as a strong relative position vis-à-vis both the benchmark S&P and the QQQ.

Although these setups in no way guarantee a positive reaction to earnings, Apple's overall technical setup indicates that the stock is poised to react positively to earnings news, and otherwise should absorb a mild to moderate disappointment. In other words, Apple argues for an upside thrust, or a buy-the- weakness response to its quarterly report.

See all of the charts illustrating Apple's technical patterns.

Get news alerts on Apple Inc. — or create your own.
Page 1