We posted "Parabolic move makes AAPL a short" on April 12. Let's review our charts to decide whether it is time to cover shorts or hold them for lower prices ahead.

In the April 12 post, we wrote: "A parabolic rally marks the terminal stage of a bullish trend. Every rally in history that went parabolic ended in a drastic drop." We showed three mathematical conditions that have to be met for a move to be classified as parabolic. We pointed out that AAPL /zigman2/quotes/202934861/composite AAPL +0.51%  has met all three of them. Visit SpikeTrade.com .

AAPL has become a cult stock among great masses of money managers. They loaded up on AAPL even when the charters of their funds, for example medium-cap, were not even remotely related to it. Now, with AAPL down 10% and The Wall Street Journal feature story on Saturday advising to lighten up on AAPL holdings, they face the moment of truth.

Will they hold their shares and drink laced Kool-Aid or will they escape from the band and run into the jungle? Never underestimate the survival instincts of a fund manager with a big mortgage. 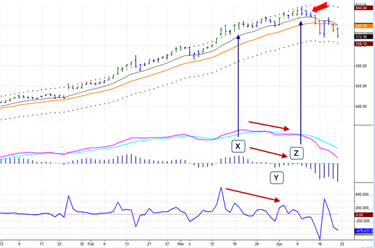 As market technicians, we look at charts for the signs of crowd behavior. Analyzing charts is like taking a public opinion poll. Sometimes the results are clear, at other times they aren't, and an experienced trader stands aside until clear signals emerge.

This daily chart of AAPL for 2012 includes our basic set of indicators: a pair of moving averages, an envelope, MACD Lines and MACD-Histogram and Force Index. You can see that in the middle of March in area X all indicators reached new record highs for the year, fully confirming the bullish case.

In area Y, MACD-Histogram dipped below zero -- we call this "breaking the back of the bull." There was another rally in April in area Y, but see how feeble it was: all indicators reached much lower highs than at X. By ticking down, they completed a pattern called a bearish divergence. Our article on shorting AAPL was published on the day marked by a red arrow.

What's likely next for AAPL? Let's take a look at a weekly chart. 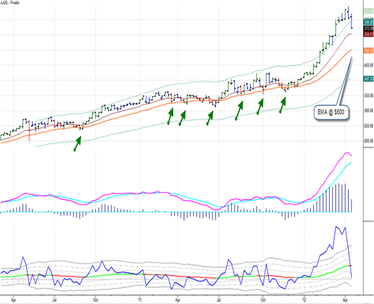 This weekly chart of AAPL, where every bar represents a week, covers the past two years. You immediately notice that the bull market in AAPL follows a normal inhale-exhale pattern. Prices rally and then return into what we call the value zone in the area of a slow, 26-week, exponential moving average.

There they gather strength and rally again. If this well-established pattern were to repeat, it might be worth knowing that on Friday this moving average was near $500.

Shorting AAPL is no simple matter, and it's certainly not a game for beginners. On a day when AAPL rallies $20, holding a short feels like being strapped into a fighting chair on a fishing boat, with an 800-pound marlin at the end of the line. Before you put on a trade, think of what size you would be able to hold on such a day.

AAPL will release its earnings after the close on Tuesday, and you can expect great volatility. We suspect it wasn't mom-and-pop selling that drove AAPL down 10% in two weeks. The big money was exiting, and they may well have known something useful.

We ended our previous post on AAPL with a story about a friend who received 10 shares as wedding gift in February. She was going to buy more, but we advised her not to do that but rather put a stop above the level of the day when she received her gift. We still think that was sensible advice.