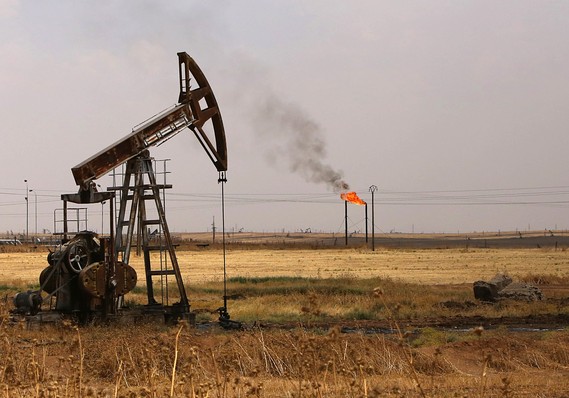 Oil bulls have been "picking the low" in oil prices for a year now. For the most part, that has not worked out so well. Oil prices are down 45% since this time last year. A number of big-name hedge funds are down sharply in 2015 — due in no small part to long oil bets. But the larger question is if lower prices continue to be the case in crude, will that be the factor that actually spurs prices higher.

It was Baron Rothschild who said, "The time to buy is when there's blood in the streets…" If that is the case, the "blood," as evidenced above, may finally be starting to flow in earnest.

Despite the big shooters’ attempts to buy low, oil prices have remained, with the exception of last year's winter rally, stubbornly depressed. This has been primarily because of three factors:

1. Burdensome global inventories: Global oil supplies in both the U.S. and world — currently classified as a "glut" — are at record highs. At the time of this writing, U.S. weekly ending stocks sit at 460 million barrels, 28% above the five-year average. 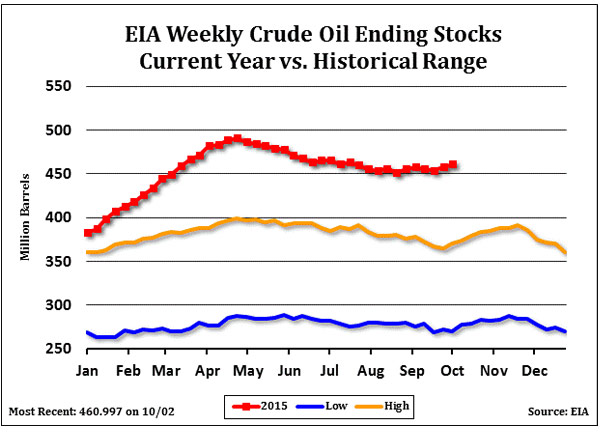 2015 crude stocks remain well above historical ranges for this time of year .

2. Global inventories have continued to grow: This is the crux of the bear argument. Even as U.S. producers pull back on production, the rest of the world is not. The oil market is a global game. That point became abundantly clear last March when OPEC rattled oil markets with its announcement that it would not only not cut production, it would increase production. In August, OPEC production hit 31.5 million barrels per day (bpd) — above its target of 30 million bpd. OPEC producers refuse to scale back as each member fears doing so would result in loss of market share to others who would not. 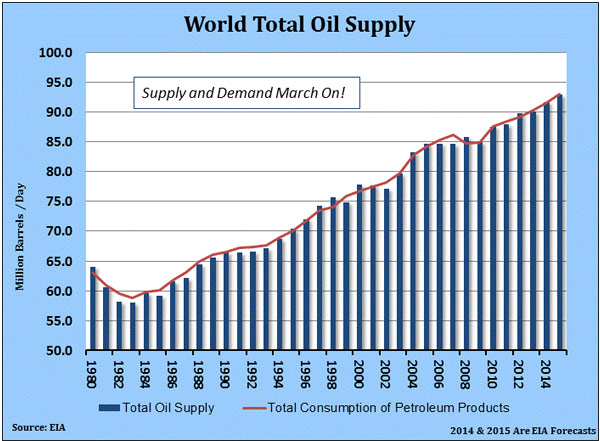 Despite U.S. cutbacks, global oil supply has continued to grow.

As a result, global oil supplies are expected to hit 93 million barrels per day in 2015, an all-time record.

3. Iran nuclear deal: The finalization of the Iran nuclear deal is expected to result in Iran doubling its oil exports to 2.3 million barrels per day. Bears have been handwringing for months about the effects of an extra one-million-plus barrels of oil hitting the world market.

Indeed, with the budgets of Middle Eastern countries such as Saudi Arabia, Iraq, Iran and Oman predicated on $90 to $100 oil, oil prices at current levels for an extended period could certainly lead to civil unrest.

However, as Robert DeNiro once said, "There’s a flip side to that coin."

While the current oil glut is what has grabbed headlines in recent months, the rebalancing of the crude oil market is already well underway. At some point, Economics 101 dictates that low prices will eventually cure low prices. The key evidence of this taking place includes:

1. U.S. production falling: Few have been harder hit by low oil prices (Russia would be an exception) than U.S. oil frackers. US production has dropped 500,000 barrels per day since peaking at 9.6 million bpd in April. 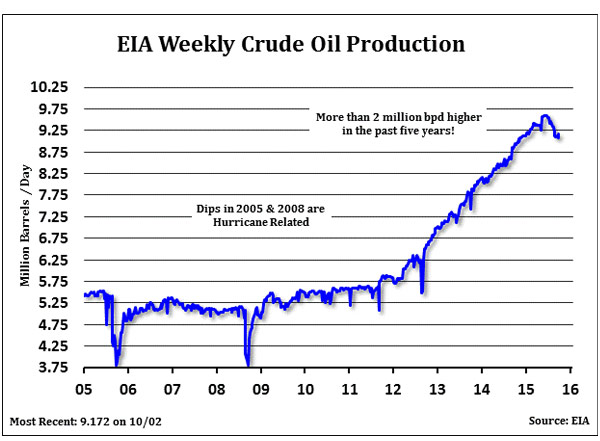 Albeit after a massive run up since 2012, U.S. crude production dropped noticeably in mid 2015.

The EIA projects U.S. production dipping by another 500,000 barrels per day by August of 2016. Now the world's largest producer of oil, the U.S. and its production cutbacks are at the core of the bull argument. According to John Hess, CEO of Hess "The seeds have been planted for a slow recovery in oil prices." Hess says global E&P investment has fallen to $550 billion from $700 billion a year ago.

OptionSellers.com projects a major low in the oil market in late 2015, early 2016.

The oil industry expects to see continued consolidation in the U.S. At current prices, about one-third of U.S. producers have the pockets to ride out the downturn. Another third are struggling. The bottom third is in trouble. Industry sources suggest that if prices remain at sub-$60 levels through the third quarter of 2015, the bottom-third members will begin to pull out in numbers.

2. Demand: Despite a lackluster global economy, lower prices are spurring demand for crude. The IEA expects global demand growth of 1.7 million barrels a day in 2015, the fastest pace in five years. Demand is expected to jump another 1.2 million barrels per day in 2016.

3.Seasonal Tendencies favor Bulls: It is not unusual for slack seasonal demand to weigh on oil prices during autumn. However, as early as December, refineries tend to switch back to gasoline production to start building inventories for the summer-demand season. This has historically (although past performance not indicative of future results, of course) resulted in surging crude demand and often corresponding price increases beginning in December. This demand effect can and last deep into the spring.

Despite the current supply picture, U.S. production cutbacks along with surprisingly robust global demand will likely offset any production increase from Iran and begin to chip away at the global oil surplus. We may finally be seeing the tipping point in oil market fundamentals.

With the expectation of more U.S. producers folding into 2016 and a strong seasonal tendency for prices to trend higher into spring (U.S. producers were pumping over two million barrels per day more last winter when prices climbed above $60), OptionSellers.com projects a major low in the oil market in late 2015, early 2016. 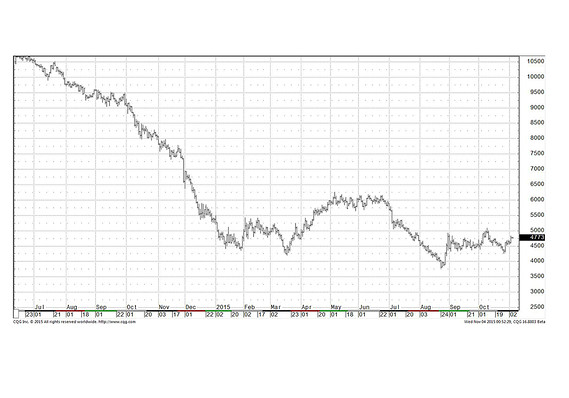 Selling puts with strikes in the 20s would seem to be a solid strategy for taking advantage of shifting oil market fundamentals without having to pick the low.

While we do not project a raging bull market in oil, a gradual firming of prices into spring seems a likely scenario, in our opinion.

For that reason, further ventures into the low $40s would seem to be opportunities for investors to begin building long positions over the next 30-60 days. While we recommend option-selling strategies for out clients, futures traders can look to buy the March or May crude futures on dips to this range. Prices approaching the $60 level or higher are not unreasonable expectations as the spring demand season kicks in.

The "blood in the streets" is real in crude oil. But the market forces that drove prices to these levels are finally beginning to enter a self-corrective cycle. While the early birds may have got their feathers clipped, the aspect of slower production and seasonal demand could bring the real opportunity around before the first snowflakes fall on the Bakken shale.

That's a proposition the Baron surely would have appreciated.