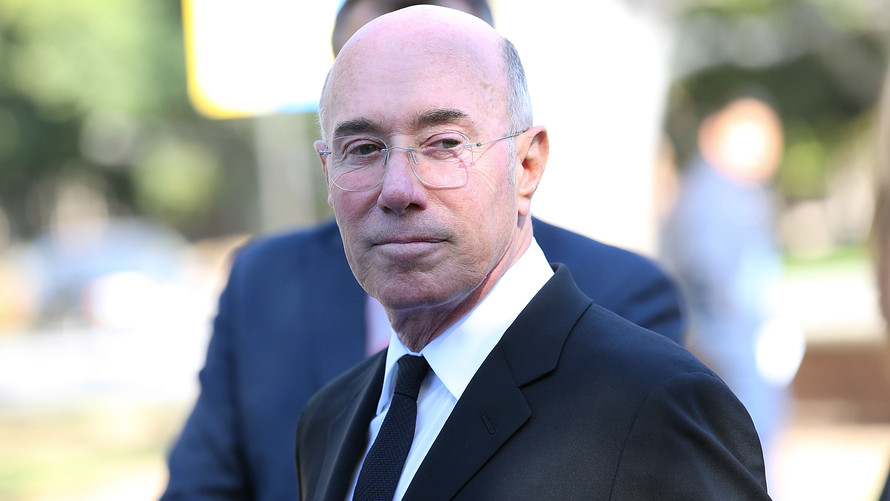 If ever there were doubts about how the superaffluent are faring amid a pandemic for the ages, media mogul David Geffen wants to make it abundantly clear that, for his part, he’s doing just fine — and he wishes us all the best.

Geffen, whose net worth is estimated at $7.5 billion, according to Forbes , tweeted a number of images of his resplendent $400 million superyacht, Rising Sun , apparently adrift off the coast of the Grenadines, a chain of small Caribbean islands in the lesser Antilles, about 2,085 miles south of New York, which has emerged as the epicenter of the U.S. coronavirus outbreak. 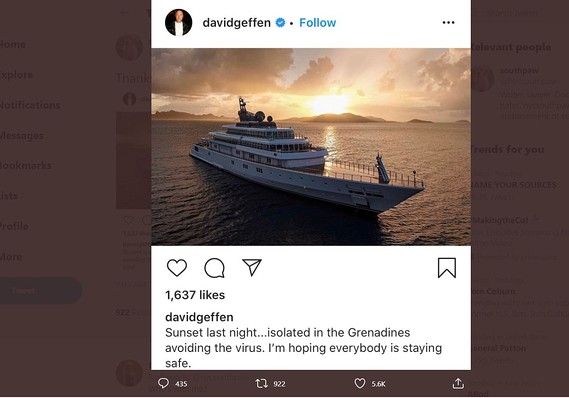 “I’m hoping everybody is staying safe,” added the founder of the Geffen record label and a co-founder of DreamWorks SKG with fellow moguls Steven Spielberg and Jeffrey Katzenberg.

At last check, Saturday afternoon, there were some 125,000 confirmed cases of the deadly pathogen COVID-19 in the U.S., making the country by far the hottest spot on the globe for the infection that was first identified in Wuhan, China, in December. The contagion has now sickened more than 684,000 people and killed more than 32,000 worldwide, according to data compiled by Johns Hopkins University .

In New York state and city, citizens are bracing for an explosion of cases in the coming weeks that are likely to overwhelm city and state health-care systems.

More than a third of the U.S.’s cases are in the Empire State, which has been on lockdown — limiting the movement of citizens and business activity — for weeks.

On Friday, President Donald Trump signed into law a roughly $2 trillion stimulus package, hours after lawmakers in the House of Representatives hustled back to the Capitol to pass the legislation intended to help millions of Americans and businesses deal with the crisis.

The Wall Street Journal described the relief package as the largest in U.S. history and some experts speculate that it won’t be enough as businesses remain fallow for weeks and workers are furloughed indefinitely.

Geffen was born in Brooklyn, and he owns expensive pads in Manhattan and California, which is also under a statewide lockdown in its attempt to mitigate the spread of the viral outbreak.

The self-made billionaire doesn’t owe the rest of the world anything, presumably, but his tweets and tone may underscore the yawning chasm between how the 1% can cope with isolation amid a pandemic that has deeply altered the normal patterns of society — perhaps, permanently.

A recent New York Times article published on March 5 highlighted the lifestyles of the rich and famous amid the pandemic, which featured the likes of Gwyneth Paltrow en route to Paris Fashion Week wearing a pricey black face mask, while many health-care workers are struggling to obtain lifesaving masks for their jobs.

“The rich are sparing no expense when it comes to minimizing their experience with the coronavirus,” the Times story observed.

The Guardian wrote that the wealthy are taking to private jets to escape the virus , while other affluent folk are fleeing to places like the Hamptons and Cape Cod, taking refuge in their posh summer homes or ensconcing themselves in luxurious rental properties, Barron’s Penta reports .

The expanding distance between the haves and the have-nots, however, isn’t sitting well with many. There were nearly 10,000 (and growing) responses to Geffen’s tweet and few, if any, were laudatory.

Can billionaires do more? Should they? Has music-label-founder Geffen been exhibiting tone-deafness on social media?

Those are questions for history to answer.

A March 9 article in the Atlantic suggested that wealthy investors are contributing funds, including the Bill and Melinda Gates Foundation and billionaire Michael Bloomberg’s charitable arm, which have donated money to help address the coronavirus pandemic. Still, in confronting one of the bigger challenges to have faced our globalized society, barring climate change, perhaps ever, ought not the wealthiest Americans, and other 1%-ers the world over, behave more proactively rather than hiding, or sailing, away?

“I do think that capital could play a role in helping some of this production. That is where they could come in,” Andrew Stettner, a senior fellow who studies manufacturing at the Century Foundation, a progressive think tank, was quoted by the Atlantic as having said.