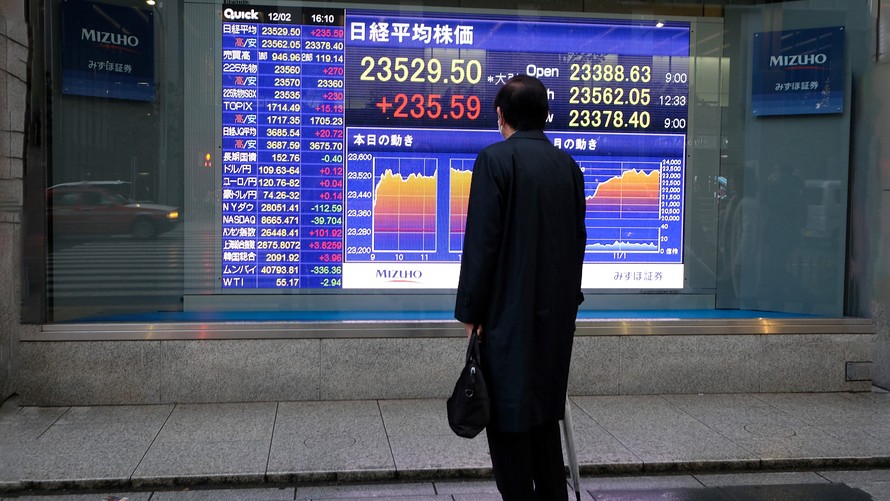 Getty Images
A pedestrian looks at an electric quotation board displaying the numbers on the Nikkei 225 Index on the Tokyo Stock Exchange in early December.

Washington is due to impose new tariff hikes on nearly $160 billion of Chinese goods on Sunday in a fight over Beijing’s technology ambitions and trade surplus. Bullish investors expect President Donald Trump to put off or scrap the increase, particularly as the 2020 presidential election looms, but talks on an interim “Phase 1” agreement announced in October haven’t achieved much traction.

“All hell could break loose if the tariffs don’t get postponed,” said Stephen Innes of AxiTrader in a report. That would tell investors “they have yet again been taken down the trade talk garden path only to end up at the cliff edge of trade war purgatory.”

Federal Reserve officials have signaled that they intend to hold interest rates steady at the conclusion of this week’s policy meeting Wednesday, and a surprisingly strong jobs report last week likely cemented this expectation. The U.S. central bank has cut its benchmark lending rate three times this year as what Chairman Jerome Powell called insurance against the economic drags from the tariff battle with Beijing and slower global growth.

Investors are looking to Thursday’s U.K. election for 650 seats in the House of Commons to break an impasse over departure from the EU and London’s future relationship with the trade bloc. Prime Minister Boris Johnson pushed for a vote more than two years early in hopes of winning a majority. He has promised to take Britain out of the EU by Jan. 31 is his Conservatives win.

Meanwhile, China’s consumer inflation accelerated further in November to its highest level in nearly eight years, driven by soaring prices of pork and other food items.

The consumer-price index rose 4.5% in November from a year earlier, matching a pace recorded in January 2012, data from the National Bureau of Statistics showed Tuesday. The key inflation reading was higher than a 3.8% rise in October and beat a median forecast of a 4.4% increase by economists in a Wall Street Journal poll.