HONG KONG (MarketWatch) — Chinese stocks traded Wednesday at their lowest level since 2009 as Asian markets suffered a sell-down and Japanese shares tumbled as many firms began to trade without rights to their latest dividend payouts.

The performance in Asia followed a downbeat session in the U.S., as criticism from a non-voting Federal Reserve member about the central bank’s latest round of monetary easing overshadowed solid economic data. Read more on the U.S. session.

“It appears as though the impact of recent central bank announcements is fading fast to be replaced by renewed global growth fears and yet more concerns about the lack of traction in delivering solutions to the fiscal crisis in Europe,” said Mitul Kotecha, strategist at Credit Agricole.

Investors in Asia were also monitoring developments in an ongoing territorial dispute between China and Japan, following reports Bejiing had rejected Tokyo’s invitation for talks at this week’s United Nations General Assembly. Read more on China rejecting talks with Japan.

Shares of Sharp Corp. (TKS:JP:6753)   (OTC:SHCAF) ended unchanged, ending the session unchanged, after the Nikkei reported lenders were expected to approve funding that will enable the firm to stay afloat through the current fiscal year. 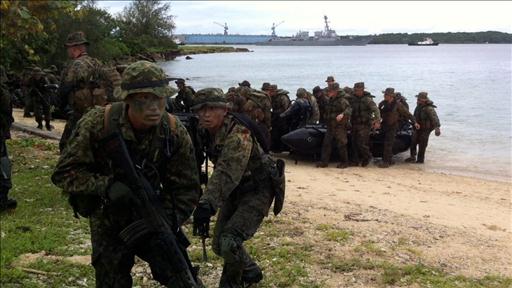 Japan's military trains with the U.S. marines for the first time on island defense tactics.

“Weak data and an elusive growth turnaround in China have led us to lower our 2013 growth forecasts for much of [emerging Asia],” Barclays strategist Nigel Chalk wrote in a research report.

“Growth is stabilizing but, looking ahead, the recovery is likely to be subdued,” Chalk said.

Lynas Corp. (ASX:AU:LYC)  tumbled 5% as the rare earths miner said it was forced to renegotiate its debt covenants as protests delayed the start of its Malaysian processing plant.