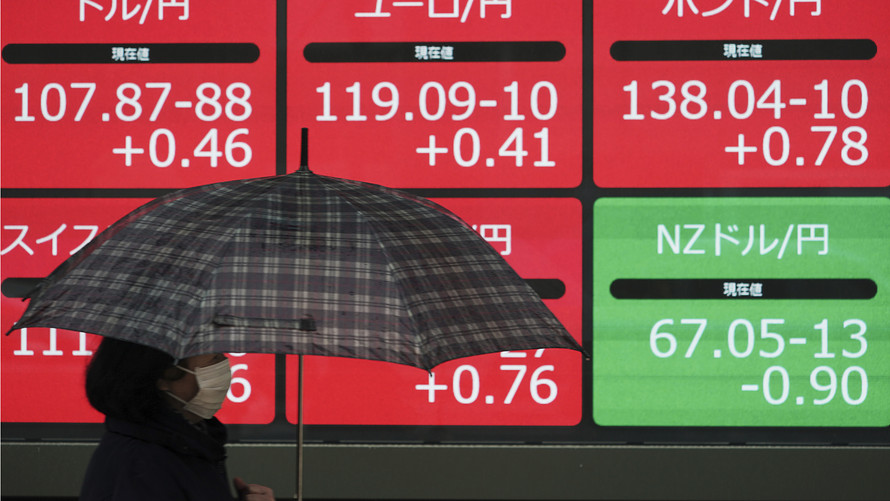 Associated Press
A woman walks past an electronic board showing world currency exchange rates at a securities firm in Tokyo on Monday.

Share prices in Asia bounced back Monday from last week’s retreat, with mainland Chinese indexes gaining more than 3% as data showed progress in restoring factory output after weeks of disruptions from the viral outbreak.

Stocks have been swooning as investors fret the coronavirus outbreak will derail the global economy. But in those declines, some see opportunities to buy.

Bank of Japan Gov. Haruhiko Kuroda issued a statement Monday, after an early plunge in share prices, saying the central bank “will closely monitor future developments, and will strive to provide ample liquidity and ensure stability in financial markets through appropriate market operations and asset purchases.”

On Friday, the BOJ issued plans for purchases of assets for the coming weeks: the central bank already buys tens of billions of dollars’ worth of government bonds and other assets each year as part of its aggressive efforts to maintain cheap credit to help prevent deflation.

U.S. futures briefly saw a moderate recovery, with the contract for the Dow Jones Industrial Average (CBT:YM00) rising while futures for the S&P 500 (CME:ES00)  also gained, but those advances evaporated.

“It may well be a case of news being not as bad as it could have been,” Jeffrey Halley of Oanda said in a commentary. “Today’s rallies across Asia have a definite relief rally look to them. Measured against the scale of last week’s sell-offs, the bounces this morning are small.”

Stocks sank Friday on Wall Street, extending a rout that left the market with its worst week since October 2008. Meanwhile, bond prices have soared as investors sought safety, pushing yields to record lows. On Monday, the yield on the 10-year Treasury note (XTUP:BX:TMUBMUSD10Y) , a benchmark for home mortgages and many other loans, was at 1.14%, held steady from Friday’s levels.

The damage from the week of relentless selling was eye-popping: The Dow Jones Industrial Average fell 3,583 points, or 12.4%. Microsoft (NAS:MSFT) and Apple (NAS:AAPL) , the two most valuable companies in the S&P 500, lost a combined $300 billion. In a sign of the severity of the concern about the possible economic blow, the price of oil sank 16%.

The market’s losses moderated Friday after the Federal Reserve released a statement saying it stood ready to help the economy if needed. Investors increasingly expect the Fed to cut rates at its next policy meeting in mid-March.

The virus outbreak that began in central China has rattled markets as authorities shut down industrial centers, emptying shops and severely crimping travel all over the world. Companies are warning investors that their finances will take a hit because of disruptions to supply chains and sales. Governments are taking increasingly drastic measures as they scramble to contain the virus.

The rout has knocked every major index into what market watchers call a “correction,” or a fall of 10%, but not more than 20%, from a peak. The last time that occurred was in late 2018, as a tariff war with China was escalating.This recent decline comes as stocks were considered overpriced before the outbreak and overdue for another pullback.

Bond prices soared again as investors sought safety and became more pessimistic about the economy’s prospects. That pushed yields to more record lows. The yield (XTUP:BX:TMUBMUSD10Y)  on the 10-year Treasury note, a benchmark for home mortgages and many other loans, was at 1.07% on Monday, from 1.14% Friday and 1.30% late Thursday. That’s a record low, according to Tradeweb.

Crude oil prices also rebounded Monday. U.S. benchmark crude gained 2.8%, or $1.30, to $46.09 per barrel in electronic trading on the New York Mercantile Exchange. It sank 4.9% on Friday over worries that global travel and shipping will be severely crimped, hurting demand for energy. The price of benchmark U.S. crude fell 15% last week.

The virus hit China in December and shut down swaths of that nation by late January. China is still the hardest hit country and has most of the 86,000 cases world-wide and related deaths. Its spread far beyond China has caused panic, dashing hopes for containment.

Nearly 60 nations representing every continent, except Antarctica, have confirmed cases.

The latest data show China’s manufacturing plunged in February as antivirus controls shut down much of the world’s second-largest economy.

A monthly purchasing managers index released Monday by Caixin magazine fell to 40.3 from January’s 51.1 on a 100-point scale on which numbers below 50 show activity contracting. A separate PMI released Saturday by the National Bureau of Statistics and the China Federation of Logistics & Purchasing fell to 35.7 from January’s 50.

Despite the plunge, business confidence rose to a five-year high after the ruling Communist Party launched efforts to revive industry with tax cuts and other aid, Caixin said.

“Manufacturers were confident that output would rise over the next year,” the magazine said in a statement.