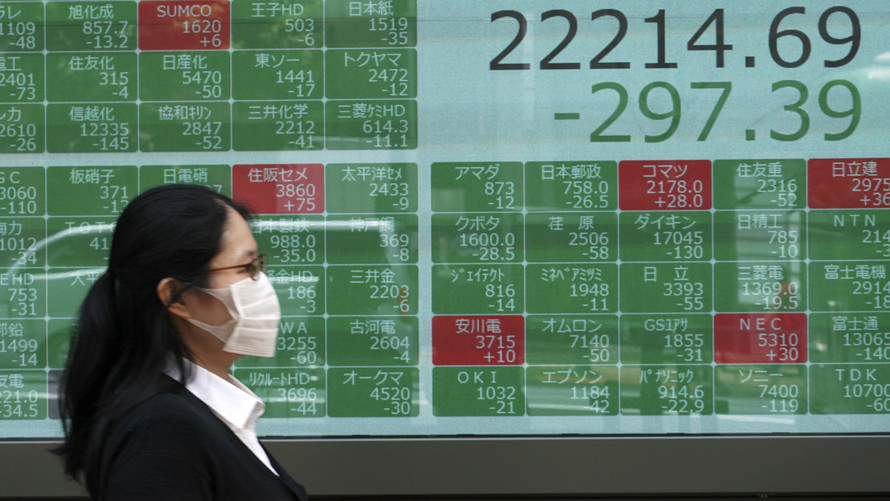 Associated Press
A woman walks past an electronic stock board showing Japan's Nikkei 225 index at a securities firm in Tokyo on Monday.

Shares fell Monday in Asia, tracking losses on Wall Street as rising virus cases cause some U.S. states to backtrack on pandemic reopenings.

Investors have been banking on businesses continuing to reopen, helping to drive a recovery from the worst global downturn since the 1930s Great Depression.

But the S&P 500 fell 2.4% Friday as Texas and Florida reversed course and clamped down on bars again in the nation’s biggest retreat yet. The new coronavirus has surged back in many places, especially the American South and West.

Concern has deepened as the number of confirmed cases topped 10 million, with more than 500,000 reported dead from COVID-19, according to a tally by Johns Hopkins University that is believed to understate the problem due to issues with testing and a large number of asymptomatic cases.

Even as virus outbreaks flare, economic data, which lag such daily measures of the pandemic, are signaling a recovery, albeit a fragile one.

“Conflicting signals between the Covid-19 spread and economic data continue to keep risk sentiment, and consequently markets, in a gridlock going into the end of June,” said Jingyi Pan of IG. “As far as the weekend leads are concerned, however, the topping of the 10 million mark for global COVID-19 cases had tipped the scale in the direction of risk-off for markets going into Monday.”

China reported that profits of major industrial companies rose 6% in May from a year earlier, to 582.3 billion yuan ($82.3 billion) as demand recovered and costs remained relatively low. That was up from a 4.3% drop in April.

China’s oil refiners and other heavy industries have profited from falling prices for crude and other commodities as global demand has waned amid the pandemic. But profits fell more than 19% in January-May, the National Bureau of Statistics reported.

Stocks on Wall Street skidded Friday as rising infections and reimposed new precautions to contain outbreaks injected fresh jitters into a market that has ridden high since April, for the most part, on hopes for a swift recovery.

Financial companies were among the biggest decliners after the Federal Reserve ordered many of the nation’s biggest banks to suspend buybacks of their stock and cap dividend payments for several months.

The number of confirmed new coronavirus cases per day in the U.S. has blasted past 40,000, according to the Johns Hopkins tally, eclipsing the mark set during the deadliest stretch in late April. Deaths and hospitalizations have been rising in parts of the country, especially in the South and West.

The stock market is likely to remain volatile as traders weigh the ups and downs in the trajectory of the pandemic.

Reflecting caution over that outlook, the yield on the 10-year Treasury note dropped to 0.64% from 0.65%. The yield tends to move with investors’ expectations for the economy and inflation and had been above 0.7% for most of last week.

Concern that a pullback in the reopening of businesses could hamper demand for energy is pulling oil prices lower. Benchmark U.S. crude oil for August delivery   lost 62 cents to $37.87 per barrel in electronic trading on the New York Mercantile Exchange. It fell 23 cents on Friday to settle at $38.49 a barrel.