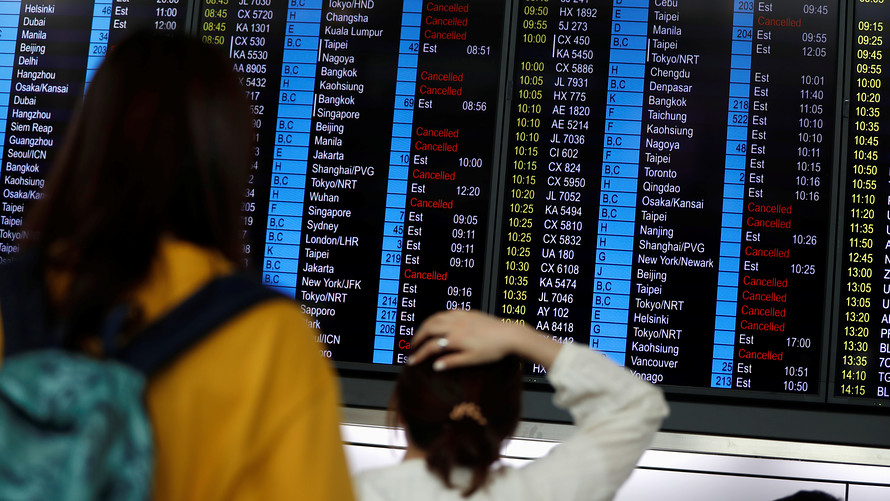 Reuters
Many flights were canceled again Tuesday at Hong Kong International Airport after it reopened.

Asian markets fell in early trading Tuesday as tensions in Hong Kong ratcheted up following protests Monday that shut down the city’s airport.

Hong Kong’s airport, one of the world’s busiest, struggled to reopen Tuesday, while protests continued, though at a smaller scale. While some flights resumed, many were canceled amid a backlog of flights following Monday’s closure.

After 10 weeks, the pro-democracy demonstrations show no sign of letting up, while Chinese officials have used the term “terrorism” to describe the protests. The clashes have weakened investors’ confidence, some analysts said, and there are fears that a harsh crackdown by China could trigger a global market selloff.

“Dropping the ‘T’ word is particularly disturbing as it does suggest a more aggressive mainland response, which triggered a wave of risk aversion across global markets,” Stephen Innes, managing partner at VM Markets, said in a note Monday night.

Meanwhile, China’s central bank set the yuan’s midpoint weaker than 7 per U.S. dollar for a fourth straight day Tuesday. The reference point of 7.0326 per dollar was weaker than the previous day, but still stronger than what analysts had expected.

“The global economy is perched precariously, hoping for a positive inflection, but braced for a stumble,” said Vishnu Varathan of Mizuho Bank in a report.

On Wall Street, the benchmark S&P 500 had its biggest decline in a week while the Dow Jones Industrial Average lost nearly 400 points. Selling was widespread. Technology companies and banks accounted for a big share of the decline.

Trump has promised 10% tariffs on some $300 billion in Chinese imports that haven’t already been hit with tariffs of 25%. The new tariff would go into effect Sept. 1 and more directly affect U.S. consumers.

Last week, Trump said he’d be “fine” if the U.S. and China don’t go ahead with a meeting next month, dampening investors’ hopes for a resolution.