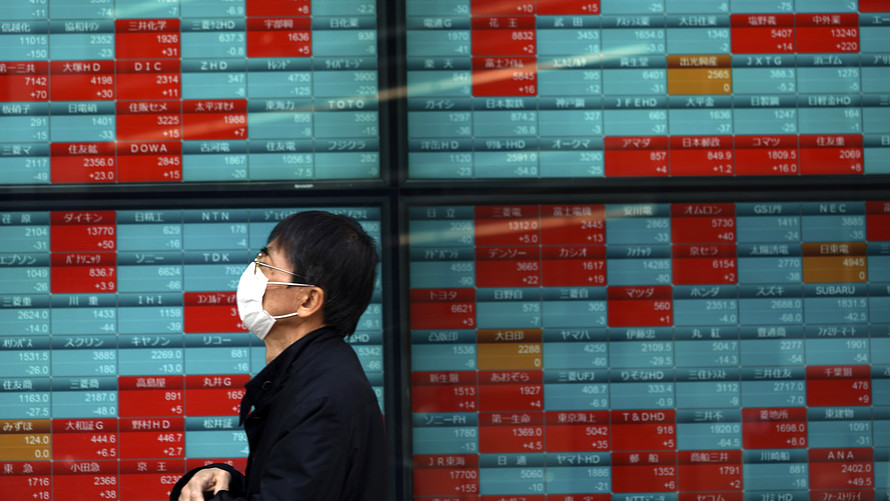 Associated Press
A man walks past an electronic stock board showing Japan's Nikkei 225 index on Wednesday in Tokyo.

Asian shares were mostly lower, gyrating in early Wednesday trading amid uncertainty over the coronavirus outbreak, which continues to claim more lives around the world.

The rally on Wall Street suddenly vanished in a market dominated by sharp swings responding to the ups and downs of the news about the pandemic.

“The recent risk rally faded quickly despite recent stimulus efforts from both monetary and fiscal authorities, with market players coming to terms with the unabated rise in fatalities as the virus continues to spread,” Prakash Sakpal and Nicholas Mapa, economists at ING, said in a report.

In Asia, Japan’s state of emergency kicked in, focused on seven urban areas, including Tokyo, with strong government requests for people to stay home and restaurants and stores to close for a month. However, there were scant signs of any change in behavior during the morning rush hour.

Even though economists say a punishing recession is inevitable, some investors have begun to look ahead to when a peak in new infections would offer some clarity about how long the downturn may last and how deep it will be.

Investors could then, finally, envision the other side of the economic shutdown, after authorities forced businesses to halt in hopes of slowing the spread of the virus. In the meantime, governments around the world are talking about pumping trillions of dollars more of aid for the economy.

Many professional investors say they’ve been wary of the recent upsurge and expect more volatility ahead. The S&P 500 has rallied nearly 19% since hitting a low on March 23, though it’s still down 21.5% from its record set in February.

Such concerns were borne out in Tuesday’s trading, when the S&P 500 swung up, down, up, down and back up again through the day.

“We are still in what you would call the relief rally off of the prior low,” said Sam Stovall, chief investment strategist at CFRA. He noted that this kind of a rally is common within deep bear markets, Wall Street-speak for when stocks decline 20% or more from a peak.

“There’s no guarantee that the worst is behind us, yet traders believe that at least there is some short-term money to be made,” Stovall said.

“It’s very hard today to envision baseball stadiums in June filled with people drinking beer and watching games,” said J.P. Morgan Private Bank’s Schaffer. “People today don’t anticipate that the economy is going to turn back on like a light switch, but rather that it will be a gradual reopening of certain parts of the economy.”

Experts say more deaths are on the way due to COVID-19, which has already claimed at least 82,000 lives around the world. The U.S. leads the world in confirmed cases with more than 398,000, according to a tally by Johns Hopkins University.

More economic misery is also on the horizon. Economists expect a report on Thursday to show that 5 million Americans applied for unemployment benefits last week as layoffs sweep the country. That would bring the total to nearly 15 million over the past three weeks. Analysts also expect big companies in upcoming weeks to report their worst quarter of profit declines in more than a decade.