Nikkei dips, as stocks in Hong Kong, Shanghai give up early gains 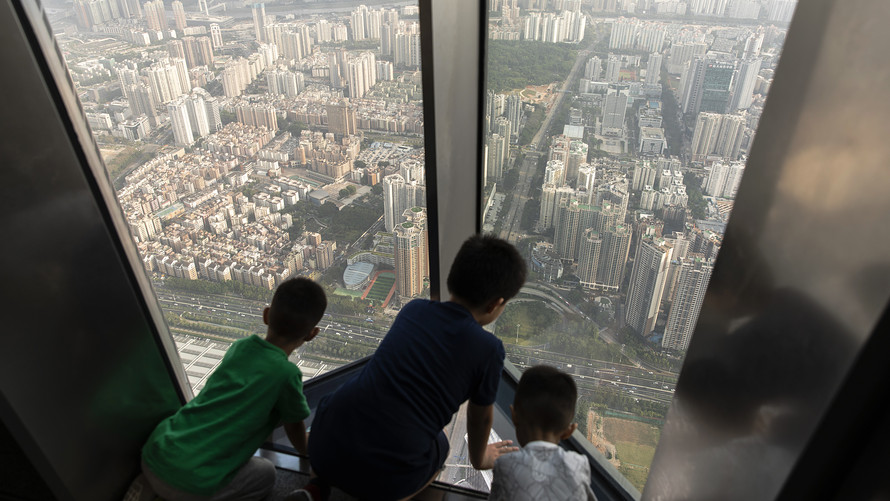 Bloomberg News
Children look below from the observation deck of the Ping An Finance Centre in Shenzhen, China.

President Donald Trump on Tuesday admitted that tariffs against Chinese goods may cause economic pain in the U.S., but said his hard line is necessary and will be worth it in the long run. “It’s about time, whether it’s good for our country or bad for our country short-term,” Trump said, adding that he didn’t think the nation was at risk of recession.

U.S. stocks fell Tuesday after another slide in bond yields and a mixed batch of corporate earnings. Financial sector stocks led the declines.

Investors looked ahead to the Fed’s release Wednesday of notes from its policymaking meeting last month and a speech Friday by chairman Jerome Powell.

Markets have “entered a holding pattern” ahead of Powell’s speech at an annual gathering in Jackson Hole, Wyoming, said Jeffrey Halley of Oanda in a report.

Investors expect Powell to signal the Fed “is about to embark on a reinvigorated wave of easing,” said Halley. However, he said U.S. data “simply does not support the need for an aggressive easing cycle.”

The U.S. market has been volatile this month as investors try to parse conflicting signals on the U.S. economy and determine whether a recession is on the horizon. A key concern is that the U.S.-Chinese tariff war will weigh on global economic growth.

Last week, many stock indexes around the world hit their lowest points of the year before rallying. Analysts say the concerns that drove that sell-off could resurface at any time.

Benchmark U.S. crude   gained 23 cents to $56.36 per barrel in electronic trading on the New York Mercantile Exchange. The contract shed 1 cent on Tuesday to close at $56.13. Brent crude  , used to price international oils, rose 32 cents to $60.35 per barrel in London. The contract advanced 27 cents the previous session to $60.03.