HONG KONG (MarketWatch) -- Most Asian stocks and currencies rallied on Thursday, with resource-sector shares tracking commodity prices higher as the U.S. dollar weakened on a surprise policy tightening by Singapore and expectations of further easing by the U.S.

Shares touched 52-week highs in Hong Kong, India, Thailand and Indonesia. The Singapore dollar hit an all-time high against the U.S. dollar while the Australian currency approached parity and the Japanese yen hit yet another 15-year high. The dollar’s slide boosted commodity prices as well: Gold hit a fresh record.

“Just the promise of more quantitative easing [by the U.S.] and higher inflation are powerful potions to make some investors’ heads spin and others flee the scene,” said Uwe Parpart, chief economist and Asia strategist at Cantor Fitzgerald.

“Nowhere is the liquidity- and hot-money-induced giddiness more in evidence than in Hong Kong, where stocks now trade at 28-month highs and investors can even justify the mania by pointing to ongoing real economic gains in mainland China,” he added.

The appetite for risk in the region was reflected in the surge in the Hong Kong stock market’s trading volumes, which hit about 70 billion Hong Kong dollars (US$9 billion) in the first two hours and finished at HK$138.5 billion.

“This is not a good sign for the market, but a good sign for HKEx (Hong Kong Exchanges & Clearing),” said Anthony Lam of Emperor Securities, saying it pointed to some big investors aggressively selling to lock in profits.

“Usually when the market volume surges for two to three days, a correction will follow,” Mr. Lam said. The Hang Seng reached its highest intraday level since June 6, 2008. 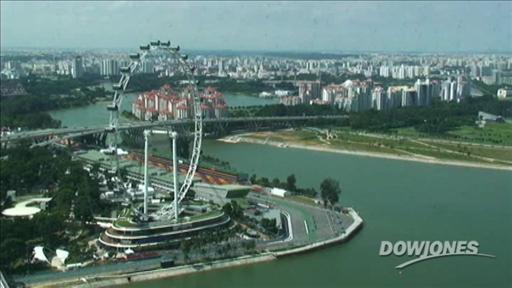 Singapore remains on course to be the Switzerland of Asia as foreign investors flood into its foreign exchange and equity markets. Dow Jones Newswires' Mark Cranfield reports.

Dow Jones Industrial Average /zigman2/quotes/210598065/realtime DJIA -2.53%   futures were up 48 points in screen trade, after the benchmark DJIA rose for a fourth session to reach a five-month high in the regular session Wednesday.

The U.S. stock market on Wednesday “painted a picture of investor enthusiasm and increased risk appetite. There was no change in the recent thematic that we’ve seen, but the mood was heightened. The market obviously viewed the Asian growth story as positive and more market-critical at this point than anything from Wall Street,” said David Taylor, market analyst at CMC Markets.

In currency trading, a surprise decision by the Monetary Authority of Singapore to tighten its policy helped accelerate the U.S. dollar’s decline. In addition to triggering a rise in Asian currencies, the move pushed the Canadian dollar to parity, the Swiss franc to an all-time high and the euro to its highest level in several months against the U.S. dollar.

The Singaporean central bank said it will “slightly” increase the slope of the trading band of the Singapore dollar -- its main policy lever -- against a basket of currencies. It said it will also widen the policy band “slightly.” It had been widely expected to keep its policy unchanged.

Commodity shares were buoyed across the region after spot gold hit a record $1,388.30 per troy ounce; it was more recently at $1,384.410, up $12.20 from Wednesday’s New York close. November Nymex crude-oil futures were up 83 cents at $83.84 per barrel on Globex, extending Wednesday’s gains when the contract rose above $83 per barrel.