“I think that Asian markets right now have already factored in some short-term unfavorable factors. Markets are stabilizing, and easing of monetary policy is already on the way,” said Linus Yip, strategist at First Shanghai Securities in Hong Kong.

“India has already cut rates, and China is still going for easing policy. So Asian markets as a whole I think will enter into a rebound in the next couple of weeks,” Yip said. 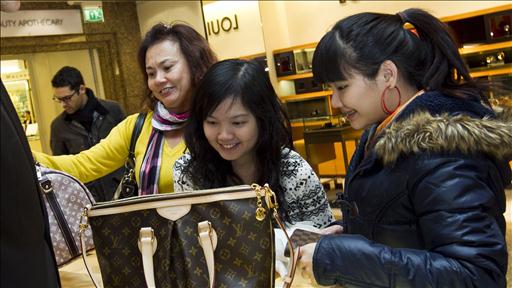 Chinese consumers are snapping up Louis Vuitton handbags but are increasingly buying them abroad, where prices are lower, raising concerns that the luxury-goods industry is headed for a slowdown in China. Photo: Getty

“We believe the jury is still very much out on what direction things will take in peripheral [European] countries in the coming months. With a number of event risks, volatility is likely to remain elevated for the time being,” said strategists at Barclays Capital.

Overnight weakness in U.S. techs, with sharp falls for Apple Inc. (NAS:AAPL)  and EMC Corp. casting a shadow over the Japanese technology sector.

LG Chem Ltd.  tumbled 9.2% in Seoul after unveiling a much weaker-than-expected 42% drop in first-quarter net profit compared to the year-ago period. Elsewhere in the sector, Honam PetroChemical Corp. fell 8.3%.

However, Oil Search Ltd. (ASX:AU:OSH) (OTC:OISHF)  jumped 5.7% after the firm said that it has found more gas in Papua New Guinea.