At G-7, Boris Johnson admits prospects for Brexit deal are ‘touch and go’ 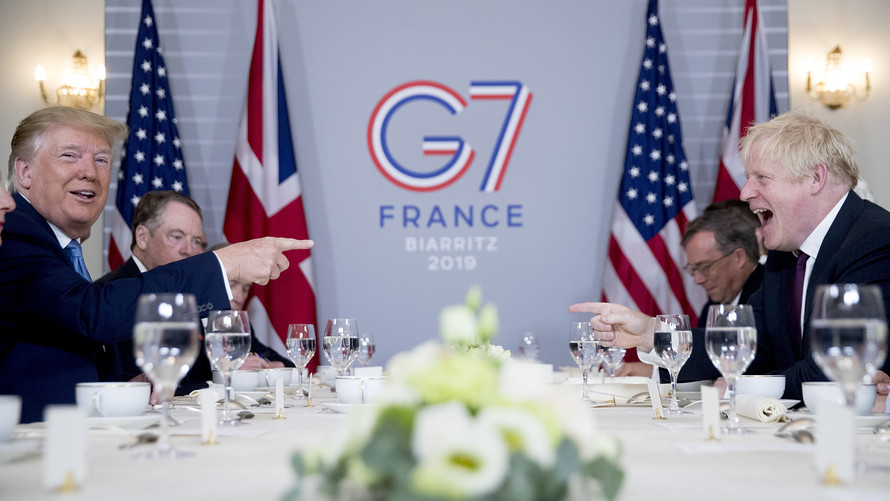 BIARRITZ, France — U.K. Prime Minister Boris Johnson acknowledged Sunday that the prospect of a Brexit deal was “touch and go,” as other European Union capitals grasp the problems Britain has with the withdrawal agreement.

Speaking on the sidelines of the Group of Seven summit, Johnson said that in the last few days, following visits to France and Germany, it has dawned on the EU what “the shape of the problem is for the U.K.” Among the key issues is how to prevent the return of a border between EU member Ireland and Britain’s Northern Ireland.

As the clock runs down to the Oct. 31 exit date, Johnson injected doubt into hopes that a deal might be stuck.

“I think it’s going to be touch and go,” he told the BBC. “But the important thing is to get ready to come out without a deal.”

And with that, there would be a price. He confirmed, speaking to broadcaster Sky, that he would withhold the bulk of the 39 billion-pound ($48 billion) Brexit divorce bill if there is not a deal.

The comments came after Johnson won U.S. President Donald Trump’s approval for his approach in talks to leave the EU after a chummy meeting on the sidelines of the G-7 summit in France.

Johnson glowed as Trump said he gave him a vote of confidence in his approach to the Brexit talks. The British prime minister’s promise to bring his country out of the EU on Oct. 31 no matter what has raised worries about a disorderly divorce that would see new tariffs and border checks on trade between Britain and the EU, seriously disrupting business.

Trump promised that he and Johnson would work out “a very big trade deal” between their nations once the United Kingdom leaves the EU.

“I’m very grateful for that,” Johnson said. “And we’re looking forward to having some pretty comprehensive talks about how to take forward the relationship in all sorts of ways, particularly on trade. We’re very excited about that.”

But the pair were barely past the elegant winding staircase at the Hotel du Palais when it became clear that each had a different vision of what a trade deal might look like. The United States has said it is ready to negotiate a post-Brexit trade deal with the U.K. in pieces — rather than London’s wish of a comprehensive pact.

Johnson pledged a “fantastic deal once we clear up some of the obstacles in our path.” Trump interrupted, promising “lots of fantastic mini-deals.”

The British prime minister badly needs a trade deal with the United States. Supporters of Brexit say a free trade deal with the United States can help make up for any reduction in commerce with the EU after Britain leaves the bloc’s single market for goods and services. In 2018, Britain did almost half its trade with the EU, while the U.S. accounted for 18% of U.K. exports and 11% of imports.

“We’re working on a very big trade deal and I think it’s going to work out,” Trump said.

The meeting between the leaders came a day after Johnson warned that getting a trade deal with the United States won’t be “plain sailing” as he bemoaned barriers to the United Kingdom’s goods in American markets.

Speaking to reporters as he flew to France for the Group of Seven meeting, Johnson cited examples small and large of British goods that struggle in U.S. markets for bureaucratic reasons. He cited things like cauliflower, English wine, pillows, rail cars and even parts for showers.

It wasn’t just goods on Johnson’s radar, but professional services, which far and away make up most of Britain’s economy. Accountants, lawyers, architects and others face barriers in providing services to the U.S. that don’t exist the other way around, he said.

Even though he needs a deal, Johnson was at pains to say he wasn’t giving away the store. Some sectors of the U.K. economy wouldn’t be part of any pact. Johnson has promised the National Health Service will be off-limits and that animal welfare standards would be safeguarded.

The odds don’t look good for Johnson, who holds a majority in Parliament of a single vote and a wish to honor a highly divisive 2016 referendum that resulted in his present course. Nonetheless, whenever cameras are near at least, he remains unflaggingly optimistic.

“Let me give you a metaphor,” Johnson told ITV as the waves of the Atlantic Ocean crashed behind him.