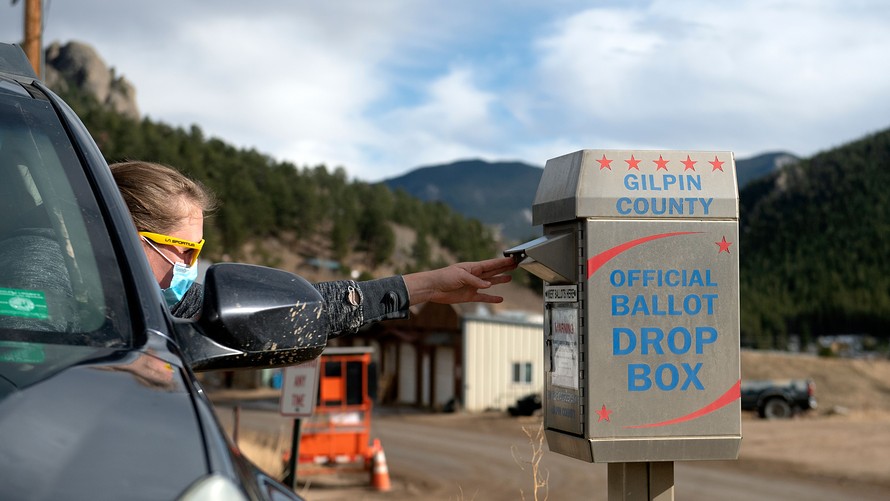 Taxes were on many voters’ minds in the still-unfolding U.S. presidential election, but some voters also got a chance to weigh in on state-level ballot measures related to income and property taxes.

Like the national contest between President Donald Trump and Democratic challenger Joe Biden, results on several tax initiatives are revealing a divided nation.

Illinois voters appear to have rejected an amendment that would have created a tiered income tax that would have raised taxes on higher earners, according to vote counts from the Associated Press.

An Arizona initiative that would raise taxes for the wealthy to fund public education was ahead as of Wednesday morning, according to the Arizona Republic.

Colorado voters agreed to slightly reduce the personal and corporate income tax rate, according to the Associated Press.

But a California proposition overhauling the assessment of commercial properties to generate more tax revenue was trailing but still close as of Wednesday morning.

The vote tallies on state tax measures are an interesting backdrop to a presidential race that’s still too close to call.

It’s difficult to glean many insights on the outcome of the presidential race based on the state tax measures, Jared Walczak of the Tax Foundation, a right-leaning think tank, said Wednesday morning.

“To some degree,” Arizona’s ballot results may track the state’s projected win for Biden, said Walczak , but California’s in Biden’s column and the vote count on a proposition that would bring in more tax dollars is still very tight. (The Associated Press called the state for Biden early Wednesday.)

But Walczak, the think tank’s vice president of state projects, said the ballot measure results so far illustrate a recurring theme: when voters are faced with a state-level tax increase, they’d like to know how their money will be spent instead of just being asked to pay more.

In general, voters favor lower taxes, but will support higher taxes if they know that their money will be earmarked for a specific use such as education or infrastructure, he said.

New Mexico and Arkansas voters in recent elections agreed to sales tax hikes where the money was dedicated for infrastructure, he noted. “That connection is helpful for voters.”

The tax-raising ballot measures come as the coronavirus pandemic tears into state government budgets. Personal income taxes and sales taxes account for more than two-thirds of states’ tax revenue, according to the Pew Charitable Trust.

But states’ social distancing orders, combined with less consumer spending and high unemployment, are teeing up budget shortfalls. Roughly half of all states are bracing for fiscal year 2021 revenue declines of at least 11%, and possibly more, according to the National Conference of State Legislatures.

Four states, including Arizona, approved recreational adult marijuana use on Election Day — an idea some supporters frame as a way to rake in more state tax money.

The mixed results on more taxes follow other efforts to levy more state taxes on the rich. Earlier this year, New Jersey Governor Phil Murphy reached a budget deal on a “millionaire’s tax,” which raised the income tax rate on Garden State households making between $1 million and $5 million.

The tax-related ballot measure results, as of Wednesday morning

• Illinois’ Allow for Graduated Income Tax Amendment: Illinois currently has a flat 4.95% income tax rate, no matter the household’s income. The amendment would set up six income brackets taxed at escalating rates, starting with 4.75% and ending with a 7.99% top rate.

55% of Illinois voters rejected the amendment and 45% supported it, with 98% of the vote counted, according to the Chicago Tribune.

• Arizona Proposition 208: This ballot proposition would establish an 8% rate for single filers making above $250,000 and married couples making above $500,000. Tax dollars generated by the added tax would be earmarked for teacher salaries and education. Arizona’s top-earning households currently have a 4.5% state income tax rate, according to the Tax Foundation .

52.6% of voters backed the measure and 47.4% have voted against it with 85% of the vote counted as of Wednesday morning, according to the Arizona Republic.

• Colorado Proposition 116: Like Illinois, Colorado has a flat income tax rate. Voters on Tuesday decided to lower it to 4.55% from 4.63%. The measure won 57% of the vote according to the Associated Press, with 85% of the count reported.

• California Proposition 15: The proposition would change the rules on commercial property assessment for tax purposes, while keeping the existing intact for residential properties. The commercial assessments would be based on current market value rather than original purchase price. The changes would generate between $6.5 billion and $11.5 billion in tax revenue, which would go toward public schools and local governments, according to the California Secretary of State’s ballot guide.

So far, 51.7% of voters are against the proposition and 48.3% are for it, with 72% of the vote counted according to the Associated Press.

In another ballot question, California voters agreed to exempt ride-share and food-delivery drivers from the state’s labor laws on who counts as an employee and an independent contractor. The outcome was a big win for companies such as Uber /zigman2/quotes/211348248/composite UBER -2.65%   and Lyft /zigman2/quotes/208999293/composite LYFT -0.60%  , which spent millions in support of the ballot measure.