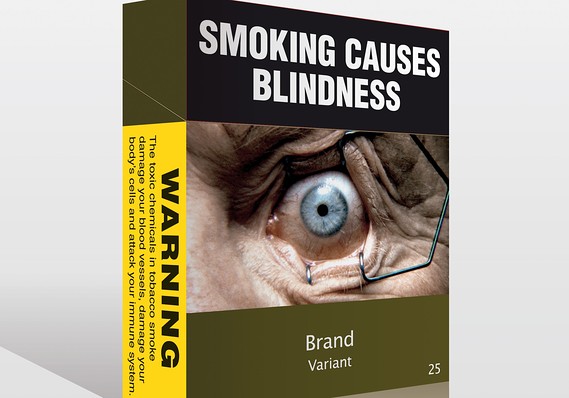 Reuters
A proposed model of a cigarettes pack under Australia’s planned law to stop the use of branding by tobacco companies.

SYDNEY (MarketWatch) — Australia’s push to become the first country to mandate cigarette packaging with almost no branding and huge, graphic health-warning labels has inflamed the tempers of tobacco companies, which are vowing to protect shareholder interests by taking their fight to the courts.

But analysts have nonetheless identified some signs of life in the challenged, multi-billion dollar industry, with emerging markets presenting the best opportunities.

Under the new laws, cigarettes in Australia would be sold in dull olive-green packets, emblazoned with graphic depictions of smoking-related diseases. The size of existing health warnings would be increased, and company logos and branding restricted.

“The new packs have been designed to have the lowest appeal to smokers and to make clear the terrible effects that smoking can have on your health,” Australia’s Health Minister Nicola Roxon said in a statement.

“The only thing to distinguish one brand from another will be the brand and product name in a standard color, standard position and standard font size and style,” Roxon said.

The government hopes to introduce the law by January 2012. But its passage won’t be uncontested.

The tobacco industry argues the no-frills packaging plan could violate its trademark and intellectual property rights.

“Our lawyers are still going through [the legislation]. We’re no different to any other company. But if the government keeps down this path of trying to take away our intellectual property, we’ll be forced to go to court,” said Scott McIntyre, spokesperson for British American Tobacco Australia (BATA), the local unit of British American Tobacco PLC /zigman2/quotes/209116881/delayed UK:BATS -0.55%   /zigman2/quotes/200689147/delayed BTAFF +0.88%  .

“What company would stand for having its brands, which are worth billions, taken away from them?” he asked.

The United Kingdom and Canada have considered similar plain-packaging schemes, while the New Zealand government said it will monitor the Australian experience.

Citigroup analysts, however, aren’t too concerned about the impact the proposed legislation will have on the sector.

“We anticipate only a moderate negative impact on the tobacco industry if this bill makes it into law, as we believe the majority of smokers will continue to buy their preferred brand as before. It may be that the number of young smokers declines in the future,” the analysts said in a research note.