Russia's VTB Swings to Loss, Expects No Profit for 2009

MOSCOW -- OAO Bank VTB, Russia's No. 2 lender, said it swung to a first-quarter net loss and lowered its year-end outlook for bad debts, in what it described as extremely tough economic conditions. 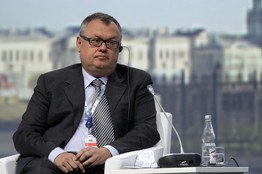 On Tuesday, the Russian bank reported a net loss of 21.4 billion rubles ($688.2 million) for the three months ended March 31, compared with a net profit of 2.7 billion rubles a year earlier, as the worsening economy prompted London-listed VTB to set more cash aside to cover bad loans. VTB said the trend would continue, with provisions now on track to exceed the 8% of gross loans forecast by 2010.

"The level of provisions is to remain high in 2009, and we would not expect to return to profit this year," Chief Executive Andrei Kostin said in a statement. Chief Financial Officer Nikolai Tsekhomsky told reporters that provisions would be "a little" more than 8% of gross loans.

Like bigger state-run rival OAO Sberbank, VTB saw its lending business notch a big expansion as an influx of government funds was deployed to the struggling economy, which could shrink by 8.5% this year, according to the Economy Ministry.

But VTB increased provisions to 49.2 billion rubles from 4.7 billion rubles, as nonperforming loans reached 4.3% of its overall portfolio from 2.4% at the start of the year. Government forecasts put delinquent loans between 10% and 12% of nationwide portfolios by year's end, although several industry participants have said the actual level is already much higher than that.

The main reasons for VTB's lackluster results were higher-than-expected provision charges, and a 10-billion-ruble loss on the reclassification of interest-rate swaps from hedging instruments into trading instruments, said analysts at UBS.

VTB's stock has more than doubled from early-year lows, as Russian equities clawed back some of 2008's substantial losses. Attention is now focused on a coming $6 billion capital increase.

Write to Andrew Langley at andrew.langley@dowjones.com