The Federal Reserve’s stress tests will be made public June 25, helping to erode concerns over profits

Even with the group stress-tested under that last dire scenario, Janney Montgomery Scott Director of Research Chris Marinac wrote in a report on June 22: “While share buybacks may be postponed longer, we feel most banks’ common dividends are secure.” Approval of the Fed to maintain their dividends would do a lot to improve investors’ confidence in the stocks.

Peta said: “My base case is, no, don’t expect mandated dividend cuts. There is nothing in what [Federal Reserve] Chairman Powell has said publicly that is leaning in that direction.”

On the other hand, KBW managing director Brian Kleinhanzl wrote in a note on June 19 that “Quarles’ comments about dividend payouts were opaque in the Q&A and dividend cuts can still not be ruled out.”

Even if dividends are cut or suspended, Peta sees an opportunity to double-down. “If you are a shareholder of a bank trading below book [value], you should vastly prefer a dividend cut to a secondary offering that will dilute your holdings. I really think a one- or two-quarter interruption of the dividend or reduction would be a buying opportunity,” he said.

The big banks have been careful with their loan portfolios in the years following the 2008 credit crisis. Check out these 10-year compounded annual growth rates for the five banks’ total loans from the end of 2009 through the end of 2019:

Over recent years, banks have shied away from leveraged loans (that is, highly leveraged lending that was greatly curtailed under the 2010 Dodd-Frank banking reform legislation), with the slack, especially for junior-lien loans, taken up mainly by private investment funds, according to Peta.

“Small- and mid-cap borrowers had been effectively orphaned by commercial banks,” he said, adding that after private investment funds raised capital in 2010 and 2011, “there was competition among direct lending funds [and] a degradation of standards. So borrowers were calling the shots,” he said.

These comments also apply to “excesses in the bond market,” driven by “a frenzied competition among fixed-income investors to find yield,” regardless of risk, Peta added.

So the banks were left out of a lot of the riskier lending activity during the long economic expansion that ended in the first quarter. This makes the pandemic crisis, as bad as it is, completely different from the 2008 crisis. Here’s an FDIC article and a paper by Thomas L. Hogan, a senior fellow at the American Institute for Economic Research and a former fellow at Rice University’s Baker Institute for Public Policy, explaining the evolution of the U.S. loan market.

Credit quality was very strong through the first quarter, although banks began to set aside billions in reserves for expected loan losses in the second quarter and subsequent quarters.

Many sell-side analysts have written that they expect banks’ second-quarter provisions for loan-loss reserves to be similar in size to the first-quarter provisions. The provision is the amount a bank adds to loan-loss reserves during a quarter in anticipation of loan losses. Yes, it is the movement of money from one bucket to another. But it directly reduces net income and lowers tier 1 common equity ratios, which are the “strictest” of the capital ratios that regulators scrutinize.

This table shows massive increases in provisions for loan losses and declines in net income in the first quarter from a year earlier:

That was a painful quarter, but the five banks were still profitable. With the reopening of the U.S. economy, the boost to loan quality from the great increase in unemployment benefits included in the CARES Act, mortgage loan forbearances and various government lending programs for businesses, it is quite possible that second-quarter provisions will be lower than expected, and even that banks begin making much smaller provisions in succeeding quarters.

“This leaves room for bank stocks to rally powerfully once you close the gap between expectations of what will be written down on banks’ books and a much more benign outlook,” Peta said.

On June 11, the KBW Bank Index dropped after bank stocks had plunged out of fear that an extended period of low interest rates would mean narrower net interest margins for banks, leading to a drop in earnings. The idea is that a narrowing of the rate curve — the spread between short-term and long-term interest rates on U.S. Treasury securities — automatically means a narrow spread between what banks earn on loans and investments and what they pay for funds.

Peta agrees with Bove, because “under the new duration-matched regime, net interest margin has become insensitive to the shape of the curve.” Matching funding and asset durations isn’t new. Banks learned painful lessons during the savings and loan crisis of the 1980s, when the Federal Reserve raised short-term rates to double digits to fight inflation, leaving some lenders with single-digit-rate loan portfolios losing money every day. This is why banks tend to sell most of the fixed-rate residential mortgage loans they make.

Peta shared two charts illustrating that there is no longer a link between banks’ net interest margins and the yield curve for U.S. Treasury securities: 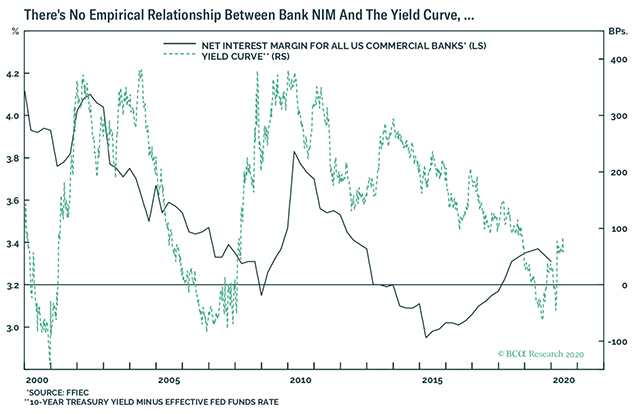 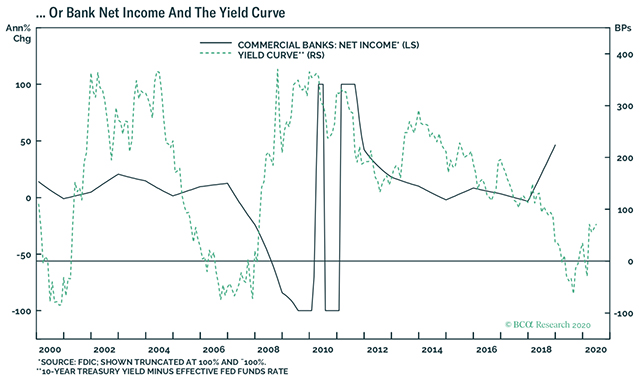