Barr taps former aide to take over as U.S. attorney for Eastern District of New York 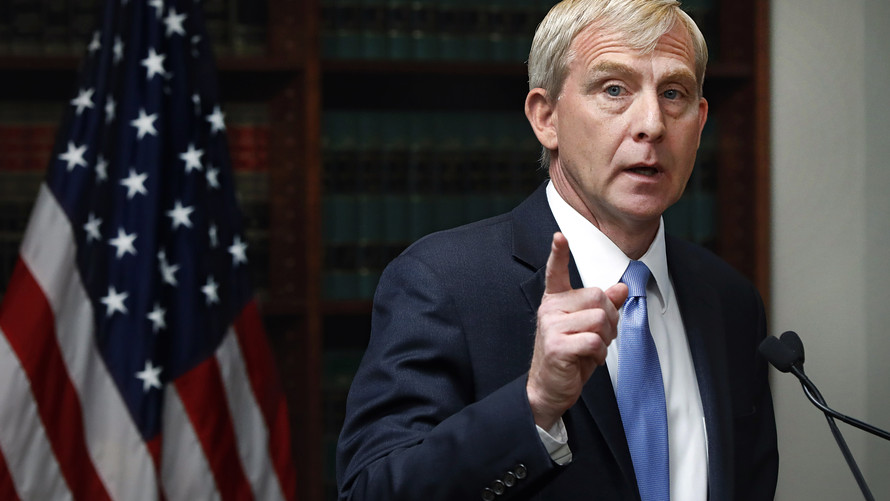 Associated Press
Richard Donoghue, U.S. attorney for the Eastern District of New York, speaks during a 2019 news conference in his office. Donoghue appeared Friday to have accepted an offer from Attorney General William Barr to become a deputy to the deputy attorney general, paving a path for a Barr ally to become acting U.S. attorney for the Eastern District.

The top federal prosecutor in Brooklyn is leaving his post for a job at the U.S. Justice Department in Washington.

Richard Donoghue, the U.S. attorney for the Eastern District of New York, told his staff Thursday that he will become the top deputy to Deputy Attorney General Jeffrey A. Rosen.

The change takes effect on Monday, said John Marzulli, a spokesman for the U.S. attorney’s office.

“Seth has served the Department with distinction during his time at Main Justice,” stated Attorney General Barr, according to the DOJ statement. “He is a talented and experienced prosecutor who manages with a steady hand. His experience in prosecuting violent crime, terrorism, and public corruption, will serve him well in his return to New York to lead the office. The Deputy Attorney General and I look forward to working with him in his new role.”

Reuters noted that DuCharme’s star had risen rapidly under the administration of President Donald Trump.

Donoghue is the second U.S. attorney in New York to leave his post in recent weeks. His former counterpart in Manhattan, Geoffrey Berman, was recently fired after overseeing several investigations that rankled Trump.

Donoghue was appointed U.S. attorney in early 2018, serving as the chief federal prosecutor for a region that includes Brooklyn, Queens and Long Island. He was not formally nominated by Trump but sworn in a few months later by the district’s judges.