NEW YORK (MarketWatch) — Regional bank BBVA Compass on Wednesday became the latest financial firm to slap its name on a big-league sports stadium, signing a deal for the rights to the Houston Dynamo’s new arena. 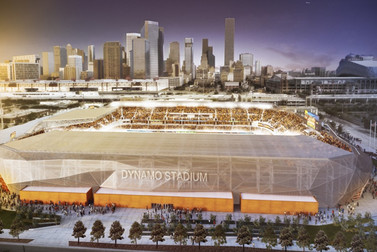 www.houstondynamo.com
An artist’s image of the Houston Dynamo’s new stadium, set to open in May 2012.

The deal isn’t company’s only foray into soccer — its parent is the title sponsor of Spain’s La Liga, one of the world’s top soccer leagues, home of Real Madrid and Barcelona.

Nor is it the first time a bank has sponsored a major U.S. sports stadium. Perhaps the most prominent deal is Citigroup Inc.’s /zigman2/quotes/207741460/composite C -1.13%  naming of the New York Mets’ ballpark, part of a partnership reportedly worth $20 million a year.

A recent study found that Citi Field enjoyed roughly $10 million of news media exposure in 2011, a figure that doesn’t include game broadcast exposure or on-site marketing. Read about the value of financial firms’ stadium deals.

Though BBVA Compass’ parent entity is among the large Spanish banks currently caught in the turmoil in Europe, and has been told by regulators to raise billions of dollars, the U.S. entity has seen results grow with Texas proving a strong market for lending. BBVA Compass’ net income rose 18% in the third quarter from the prior year.

Another financial services firm, MetLife Inc. /zigman2/quotes/206319319/composite MET +0.34% , recently signed its own naming deal, a 25-year partnership for the Meadowlands stadium, home of the National Football League’s New York Giants and New York Jets. That deal was reportedly worth as much as $20 million a year.

A Major League Soccer team in Houston isn’t the same as a professional football or baseball team in the country’s biggest media market, a fact reflected in the different deal values. But BBVA Compass has a sizeable presence in Texas — it is the state’s fifth-largest bank, according to the Federal Deposit Insurance Corp. — and the Dynamo are one of MLS’s more successful teams, having won two championships in the past six years and losing to the Los Angeles Galaxy in this year’s MLS Cup Final.

Wednesday’s agreement is the fourth major stadium naming deal in Houston. Reliant Energy sponsors the NFL’s Houston Texans’ home and pays about $10 million a year, according to sponsor research firm IEG. The deal for Minute Maid Park, home of baseball’s Houston Astros, is worth about $6 million, while Toyota Motor Corp. /zigman2/quotes/207653022/delayed TOYOF -0.79%  pays $5 million for the Toyota Center of the National Basketball Association’s Houston Rockets.

“These days $2 million is at the low end of the scale [for a stadium deal],” said Jim Andrews, senior vice president at IEG.

Andrews noted that the Dynamo’s BBVA agreement is just the latest in a busy year for stadium naming deals. Aside from MetLife Stadium, four deals involving major league teams have been announced in 2011, according to IEG, while Farmers Insurance agreed to sponsor the proposed NFL-ready stadium in Los Angeles, and High Point Solutions signed up to sponsor Rutgers University’s football stadium.

The thawing in the market comes after what Andrews said was a virtually barren two- to three-year period for stadium deals as companies retrenched in the face of the financial crisis and the subsequent recession.

David Benoit contributed to this story.