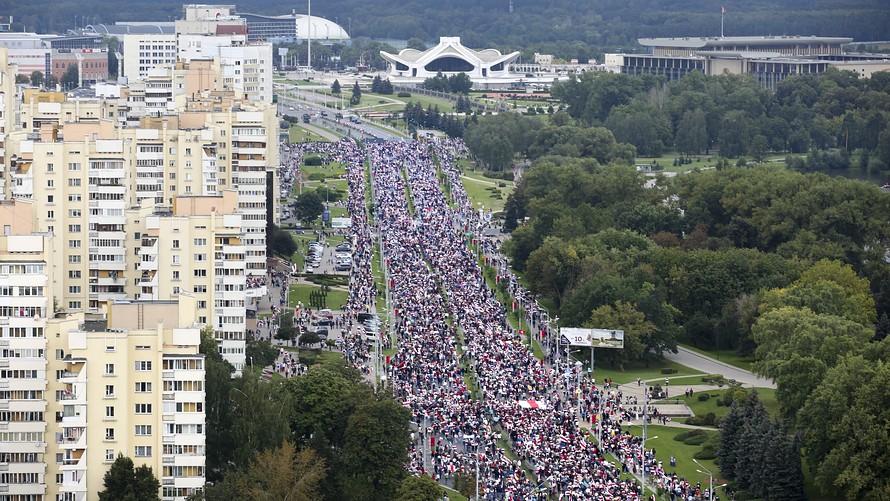 KYIV, Ukraine (AP) — A leading opposition activist in Belarus and two other members of an opposition council went missing Monday, raising fears they were detained as authorities seek to squelch nearly a month of protests against the re-election of the country’s authoritarian leader.

Maria Kolesnikova, a member of the Coordination Council created by the opposition to facilitate talks with President Alexander Lukashenko on a transition of power, was reportedly put on a minibus in the capital, Minsk, and driven away by unidentified people. Last week, Kolesnikova announced the creation of a new opposition party.

Her disappearance follows a massive rally Sunday in Minsk that drew an estimated 100,000 protesters demanding the resignation of Lukashenko, who extended his 26-year rule in an Aug. 9 election that the opposition and some poll workers say was rigged.

Sunday’s demonstrations in Minsk and other cities went on despite authorities warning that participants could face reprisals. The Interior Ministry said 633 people were detained Sunday for taking part in unsanctioned protests.

The Belarusian Interior Ministry said it hasn’t detained Kolesnikova but the State Security Committee that still goes under the Soviet-era name KGB has kept mum.

The Coordination Council denounced what it described as “methods of terror used by the government instead of a dialogue with society.”

“Such methods are unlawful and will only exacerbate the situation in the country, deepen the crisis and fuel more protests,” it said in a statement.

Lithuanian Foreign Minister Linas Linkevicius tweeted that Kolesnikova’s disappearance is part of the Belarusian government’s effort to “cynically eliminate one by one” the leaders of the protests and called for her immediate release.

After a brutal crackdown on protesters in the first few days after the vote that stoked international outrage and swelled the ranks of protesters, authorities in Belarus have switched to threats and selective arrests of opposition activists and demonstrators.

German government spokesman Steffen Seibert strongly condemned all the arrests in Belarus, noting that “the only response that Lukashenko and his people seem to have for (the protesters) at the moment is naked violence.”

“We demand the immediate release of all those who were arrested before the elections, on the day of the election and since the election, simply for exerting their democratic, self-evidential rights as citizens,” he said.

Targeting the protest leaders, Belarusian prosecutors have opened a criminal probe of the Coordination Council that opposition activists set up after the election to try to negotiate a transition of power.

Two council member, Sergei Dylevsky and Olga Kovalkova, were given 10-day jail sentences and, after serving them, handed new 15-day prison terms. Kovalkova surfaced in Poland on Saturday, saying the authorities pressured her to leave the country after threatening to keep her in jail for a long time.

Several other council members have been called in for questioning.

Sviatlana Tsikhanouskaya, the main opposition challenger to Lukashenko in the election, moved to Lithuania a day after the vote under pressure from authorities. She said Monday that Kolesnikova’s disappearance marked another attempt by the government to intimidate the opposition. 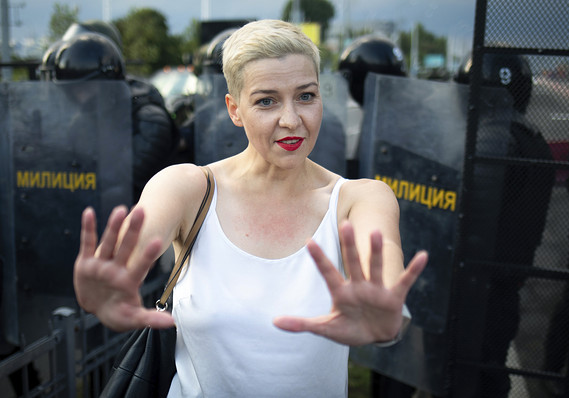 Associated Press
Maria Kolesnikova, one of Belarus's opposition leaders, gestures during an Aug. 30 rally in Minsk.

“It’s an attempt to derail the work of the Coordination Council, but we will not be stopped,” she said. “The more they try to scare us, the more people will take to the streets. We will continue our struggle and push for the release of all political prisoners and a new, fair election.”

The former teacher ran against Lukashenko after her husband, a popular blogger, was jailed. Two other top potential challengers were blocked from running. One was jailed on money laundering charges he dismissed as a political vendetta, and another one fled the country with his children before the election, fearing arrest.

Last week, Kolesnikova announced the creation of a new party, Together. She said the move will help overcome the current crisis, but the party founders’ call for constitutional changes has stunned some other opposition council members, who argued that it could divert attention from the main goal of getting Lukashenko to step down.