Was there a Beyoncé bump in applications to black colleges?

The documentary about her Coachella performance is now on Netflix 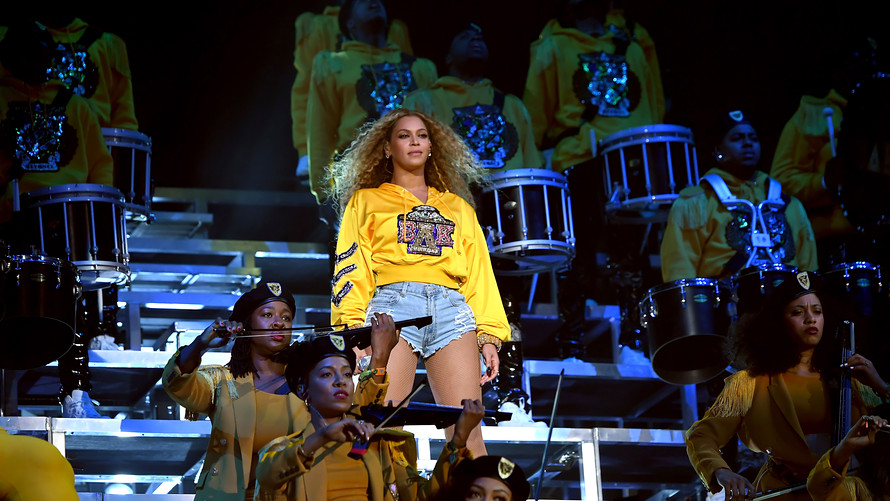 Getty Images
Beyoncé says in the documentary about her Coachella performance that she dreamed of attending a historically black college. (Photo by Larry Busacca/Getty Images for Coachella )

College students aren’t necessarily known as early risers, but on Tuesday morning Nia Page, a junior at Spelman College in Atlanta, made sure she was up well before 9 a.m.

That’s because her school was giving out tickets on a first-come first-serve basis beginning at 9:30 for an advanced screening of Beyoncé’s Homecoming documentary, which debuted Wednesday on Netflix /zigman2/quotes/202353025/composite NFLX +1.28% .

“It should be really exciting,” said Page, the rising student government president at Spelman, a prestigious black women’s college.

The film chronicles the making of Beyoncé’s Coachella performance last year, which was a celebration of Historically Black Colleges and Universities, a category of colleges created before 1964 with the primary mission of educating black students. The production included marching band performances in the style you’d encounter at a football game featuring an HBCU team and step team routines reminiscent of those you might see performed by a black Greek letter organization.

The mega-star followed up the performance by announcing a scholarship , called the Homecoming Scholars Award Program, that provided $25,000 to four students at four different HBCUs. The singer reportedly hoped that both her performance and the scholarship would inspire more students to enroll at HBCUs.

It’s difficult to tease out Beyoncé’s role in any student’s decision to enroll at a given college, but her decision to highlight HBCUs certainly had an impact. When eagle-eyed Spelman students spotted their school’s T-shirt hanging on a rack near Beyoncé as she prepared for Coachella, the event “basically went viral on Spelman’s campus,” Page said. “We were very, very proud of that, we loved it.”

In addition to creating buzz on HBCU campuses, Beyoncé’s performance may have also had an impact on prospective students’ decision-making. Page said that when she spoke to high school seniors last year who were considering Spelman as part of an admitted students program, “I heard Coachella brought up a lot.”

“We welcome the opportunity to join in the celebration of the invaluable contributions and distinct culture of historically Black colleges and universities,” Spelman’s president, Mary Schmidt Campbell, said of Tuesday night’s screening.

It’s perhaps too early and complicated to tell if there’s been a Beyoncé-bump in enrollment at these schools. But her performance comes as part of a broader increase in enrollment at HBCUs over the past few years. The uptick is a result of a variety of factors, including, experts say, more cultural and political appreciation for the schools.

That includes prominent politicians like U.S. Sen. Kamala Harris, a California Democrat running for president and Stacey Abrams , who narrowly lost the race for Georgia governor, highlighting their experiences at HBCUs on the campaign trail and looking to their alumni communities for political support. In addition, movies like Jordan Peele’s “Us,” which features prominent references to Howard University, are also putting the spotlight on these schools.

Total fall enrollment at HBCUs ticked up about 2% between the 2016 and 2017 academic years, even as college enrollment overall declined.

“It’s been a part of now a four-year movement that we’re seeing that has embraced and affirmed HBCUs in a way that hadn’t happened in recent years,” said Walter Kimbrough, the president of Dillard University, a private HBCU in New Orleans. Still, “whenever Beyoncé does something it takes it to another level,” he added.

Her performance and other more recent references to HBCUs aren’t the first pop culture references highlighting the schools. “A Different World,” a late 1980s and early 1990s-era sitcom and spinoff of “The Cosby Show” focused on the experiences of Denise Huxtable at a fictional historically black college. The show, which ran for several seasons, helped to influence a cohort of students to consider HBCUs that hadn’t necessarily before, said Crystal deGregory, a history professor at Kentucky State University, an HBCU.

“Is it a moment that is going to translate to dividends as enduring as lets say A Different World? I don’t think so,” deGregory said of Beyoncé’s performance. “Trends in pop culture are really too fleeting at this moment.”

In addition, HBCUs have faced enrollment challenges over the past several years. It may take more than some goodwill from a major star to overcome those hurdles. At the same time “A Different World” was pushing some students towards HBCUs, “you also had those most affluent in black America trying to demonstrate in the positioning of their children in highly selective and historically white institutions that they had arrived — that they were somebody,” deGregory said.

Changes to Parent PLUS loans hurt enrollment at HBCUs

HBCUs have also faced more recent major challenges enrolling students. In 2011, the Obama administration tightened the underwriting standards for Parent PLUS loans — a type of federal student debt that parents can use to help finance their childrens’ education. The loans are controversial because traditionally the Department has made them to parents without doing much to ensure they could repay them, saddling some with unsustainable debt as they approach retirement.

The new standards announced in 2011 stipulated that, among other things, parents who had accounts in collections within the last five years wouldn’t be eligible. Given that African-Americans have historically had limited access to wealth in America, black families were particularly reliant on Parent PLUS loans. The tightened underwriting had the effect of making it much more difficult or nearly impossible for many students to attend HBCUs, sending many of the schools into a state of financial panic.

The Obama administration later loosened the standards, but the damage was already done, said Brian Bridges, the vice president for research and engagement at UNCF, an HBCU member organization. Between 2010 and 2015, the number of students enrolled at HBCUs dropped from 327,000 to 293,000, an analysis of Department of Education data by the Pew Research Center found.

Now, a more public embrace of HBCUs by Beyoncé and others is helping to reverse this trend.

“While it is hard to show a direct correlation between student enrollment at our 47 member-schools and Beyonce’s amazing performance at Coachella, what we do know is the attention, positive news coverage and goodwill she has generated has certainly been welcomed and impactful,” Harry Williams, the president of the Thurgood Marshall College Fund, an association of public HBCUs, said in a statement. “We have seen more positive media exposure on HBCUs, our marching bands, culture, and value in the higher education space.”

More overt racism is pushing some students to HBCUs

But there are also other societal factors at play. The uptick in racial tension over the past few years at colleges that have been historically majority white, in addition to the increase in public displays of racism after the election of President Donald Trump has students and their families looking for colleges where they feel safe and understood.

Students are looking for colleges “where there are more people who look like them and understand their experience in America,” Bridges said. “HBCUs are a beneficiary of that. Some of the tension in the country is driving students and their families to consider HBCUs more closely again.”

‘Some of the tension in the country is driving students and their families to consider HBCUs more closely again.’

— Brian Bridges, the vice president for research and engagement at UNCF

The schools are also taking their own steps to boost enrollment, like setting up transfer agreements with certain community colleges, Bridges said.

While the renewed attention to HBCUs from Beyoncé and others is welcome, deGregory said she wishes the mega star and others would do more to ensure the longterm stability of the schools.

The $100,000 in total that Beyoncé donated to these schools is frankly a drop in the bucket compared to some of the multi-million and even billion dollar donations announced by predominantly white institutions on a semi-regular basis.

Representatives for Beyoncé did not return a request for comment.

HBCU’s struggle to bring in as much as these institutions in part due to broader inequality in higher education financing, a system where the schools with the most resources continue to grow those resources.

But HBCUs also face a very specific challenge in their quest to sustain their finances: the racial wealth gap. Given that black families have less wealth to draw on, HBCUs are often serving students and families for whom paying for college is a major challenge. That also means when their students graduate, they may have less wealth from which to donate back to their alma mater.

HBCUs have also historically relied on philanthropy from wealthy white donors, but it’s been notoriously fickle, deGregory said. As soon as black students were allowed to attend historically white institutions, and did, white philanthropists who had traditionally supported black students by supporting majority-black schools began doing so by supporting majority-white institutions that enrolled back students — but in relatively low numbers.

Beyoncé’s activism surrounding HBCUs could widen the network of support — including monetary — for these schools by bringing the “power of HBCUs to new and old audiences,” said Marybeth Gasman, the director of the Penn Center for Minority-Serving Institutions.

“I do think that when you have somebody of that stature doing these things it does cause kind of a ripple effect,” she said.